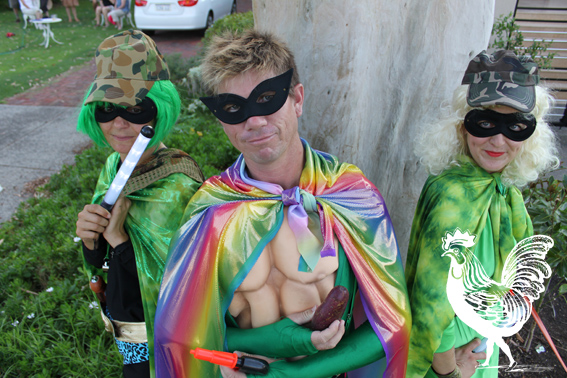 BAM! KAPOW! Captain Ecosystem and the Ozone Girls are on the case of a villainous foe who’s been poisoning an Ardross tree.

After the tree was poisoned a second time January 4 the trio abandoned their alter egos, donned their leotards and outside undies and took to patrolling the mean streets of Gothamdross between the hours of midnight and 3am.

“Why stand there and let crime happen?” Eco asks in a superhero tone of voice.

“They’re trying to get rid of it just for the view, and that’s wrong.”

Ozone Girl One adds: “Instead of letting someone else do it, we decided to do it ourselves. We’re a part of nature, nature is a part of our home. It’s unfair and selfish that one person is removing part of nature.”

The 35-odd-year-old tree straddles 13 and 15 Ardross Street, but neither neighbour is suspected as their views aren’t affected. Instead it’s thought someone further up the road might be trying to kill it off to get a better look at the river.

Neighbour Peter Bennetts has set up a camera to catch the dastardly miscreant in the act.

“I don’t know why people would do it,” he says. “It’s a beautiful tree and hundreds of people a week walk down here and get pleasure out of it.”

He’s organised a petition signed by the neighbourhood asking the council to “take necessary steps to save the street tree” and “nurse it back to health”.

Acting CEO Marten Tieleman doesn’t sound fired up. “There may be an opportunity to prosecute” if the culprit is caught, he stated. But the fine maxes out at $1000.

Eco and the Ozones want the tree put on a protected list so heftier penalties can be levied.

“I had to eat a whole block of chocolate just to do this interview.”