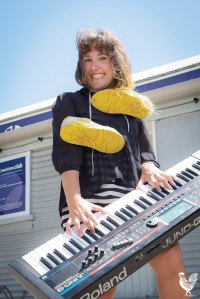 • Akemi Corbett will be tapping, singing and walking to raise funds for cancer research. You can help by heading to the Fly February 21. Photo by Jeremy Dixon

THERE’S nothing to sing about in statistics from WA’s Harry Perkins Institute for Medical Research, which paints a grim picture for women and cancer.

A staggering one in three Australian women will be diagnosed with cancer before the age of 85 and, on average, four will die from it each day, says Professor Peter Klinken.

When Akemi Corbett’s grandmother was diagnosed with ovarian cancer Corbett decided to do her bit for research, organising a fundraising concert at the Fly, with the money going to the institute.

“My grandmother’s doing well. But it’s terminal of course,” Corbett tells the Herald.

The benefit concert is a precursor to a 60km walk over two days by the Fremantle woman and a friend whose family has also been touched by the deadly disease.

It’s part of The Weekend to End Women’s Cancers, now in its second year, which will see men and women walking to raise money for research.

It’s on over the weekend of March 15-16 and takes participants through parts of Perth and South Perth, with a night under canvas before donning joggers for the final day’s walk.

Corbett is keyboardist with Whails and Tristram Corbett and will perform at the show.

“My brother Tristram is on the bass and he’s also starting off the night with a solo set,” Corbett says. “We might do a couple of songs together if the patrons are lucky.”

Freo band The Morning Night has also donated its time.

The band’s sound has been described as a cross between The Triffids, The Go-Betweens and The Church, with a mix of music ranging from “pretty pop to the dense edginess of rock”.

For some sweet local rock’n’roll that will make you feel good, head on down to the Fly in Parry Street, Friday February 21. Doors open 8pm, tickets $13.50 at flybynight.org or $15 at the door—if there’s any left.