A BEACONSFIELD pensioner has found himself in a Pythonesque debate with Fremantle council over a verge tree that’s not dead, just resting.

Sebastian Caniglia, who’s lived beside the Beaconsfield Plaza for 44 years, has been watching the tree slowly die for years and reckons it’s now such an eyesore it should go.

Most of its limbs have rotted and been chainsawed off and only a handful of branches sport any greenery. 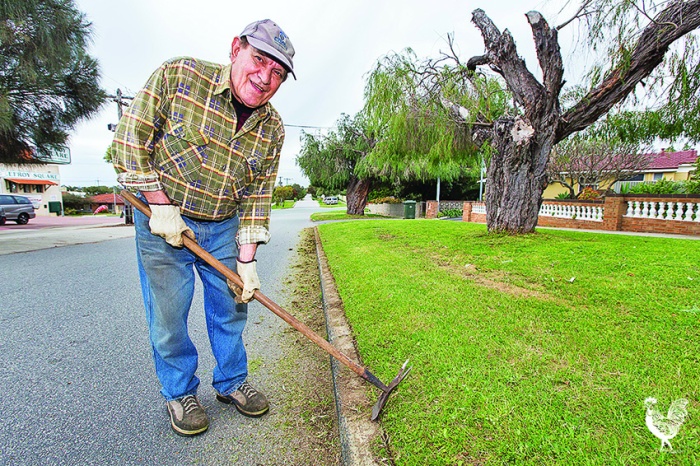 Mr Caniglia, expertly trimming his verge lawn with a a sharpened hoe when the Chook caught up with him, said when he’d called the council someone tried to fob him off by claiming the tree was heritage listed.

The council says the peppermint tree isn’t heritage listed but it’s not dead or ugly enough to be replaced.

“While it is acknowledged that this tree is in decline due to its age, this in itself is also not considered to be sufficient grounds for removal,” a council spokesperson told the Herald.

“The test for removing a tree is if it is unsafe, dead or incorporates less than 10 per cent green growth.”

by MATTHEW DWYER and STEVE GRANT