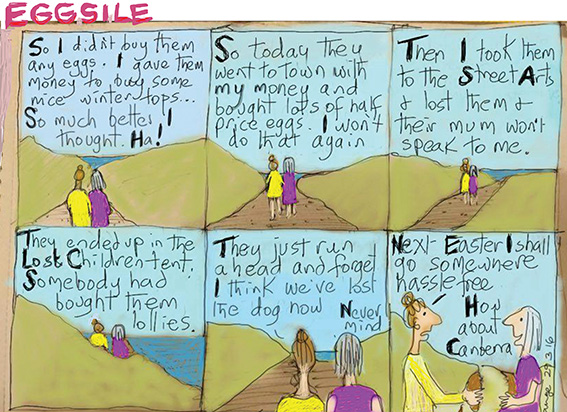 Such joy!
OH, thank you for such joy on your front page (Herald, March 26, 2016)!
The photo of Antonietta and Luigi Mauti picking their fruit together was a beautiful start to my weekly ritual of reading inch-by-inch, page-by-page my fave newspaper.
Yes, the proposed Roe highway, Freo politics and disheartening battlers are all facets of what smacks us daily in the forehead.
But what our lovely Carrington street couple shared with us is what is most important in life — love, sharing and quality time!
Thank you photographer Matthew Dwyer for capturing it and reminding us all.
Susana Gauci
Winfield St, Hamilton Hill
The Ed says: Thanks Susana—we’re delighted you loved the photo as much as we did!

Freo fails welcome test
ANYONE who has had the misfortune to disembark at Fremantle over summer would have experienced the terrible situation described in your front page article (“A heavy welcome home,” Herald, March 19, 2016).
After a 53-day cruise from London we arrived home to WA and we had plenty of luggage to manage, and even tried to enlist the help of the border force officers who went looking for trolleys.
After filing a complaint we received the same response as you did from Fremantle Ports’ Ainslie de Vos, even though we’d arrived as scheduled at 8am and there was never any porters to be on site.
Having stopped at numerous ports of call on our voyage, Fremantle would have to be the most unattractive and lacking in basic facilities anywhere.
Welcome to Western Australia.
Mary-Ellen Butt
Reynolds Rd, Mount Pleasant

Is an hour of music too much of a grind?
IN response to your one-sided article (Herald, March 26, 2016) in relation to the recent San Cisco concert at J Shed, I would like to “shed” some more light on the day’s and evening’s activities.
As the manager of the band and having been present nearly all day, I feel San Cisco were unfairly tarnished by this article.
Although I cannot speak on behalf of Sunset Events, especially in regards to the cleaning of the venue, which was their responsibility and certainly not the band’s, I can speak of the amazingly positive feedback we received from the audience.
The band stuck to very stringent timelines for their soundcheck (one hour, 12–1pm). They were not allowed to go over nor begin before.
The afternoon concert lasted from 2.30–5pm, with a total of two hours’ live music, and taped music in between. In the evening the show began at 7pm and concluded at 9.45pm, 15 minutes inside the agreed curfew.
There were no cases of unruly behaviour within the concert site all day, even with 1600 fans attending.
San Cisco pride themselves on playing uplifting indie pop songs and, over their eight years playing music internationally around the world, have never had their crowd behaviour questioned.
One of the more satisfying parts of my job, especially in our home town Fremantle, is to hear the praise and compliments from local folk saying how much they enjoyed the show.  The compliments were flying after this particular weekend, especially from numerous parents who had brought their children to their very first concert to see San Cisco play.
They said what an amazingly positive experience it was for their young sons and daughters. For the evening we heard praise for the band’s professionalism and how much they have developed since their first shows at the X-Wray cafe eight years ago.
I am sure that for the one hour Janet Nixon could not hear her angle grinder she might have taken a moment or two to think how much joy this concert was going to bring 1000 young people, to have them actively engage in a healthy activity, and to inspire them possibly to take up music or a career in the arts.
After all, Ms Nixon and photographer Mr Zuvela are surely both artists themselves, like San Cisco, just wanting to share their art with an audience.
Philip Stevens
Manager, San Cisco
The Ed says: Thanks Phil. We’ve received loads of emails from inner-city residents confirming they thought the concert was very loud too. We never suggested the band flouted any rules, but maybe the council needs to take a fresh look at the volume levels it allows at concerts, or does a bit better at informing people about the likelihood of loud music.

Who’s paying for Abbott’s world tour?
WHAT is Tony Abbott doing travelling the world meeting with world leaders? Who is paying the hotel bills and travel expenses? He is now a backbencher and should be representing his electorate and working to help his constituents.
Why is Malcolm Turnbull allowing him to get away with all this? The soft approach does not work with Tony Abbott — he sees it as a weakness. Turnbull should rein him in or is he happy just to have him out of the way?
Pat Nicholson
Bevis Court, Bibra Lake

Fremantle’s sad decline
AS a frequent visitor to Fremantle over many decades I have been saddened by the decline in the retail section typified by the half-emptiness of shops in the Woolstores and High Street mall.
This has coincided with the rise of the Phoenix and Mosman Park shopping centres. Why? free parking, of course.
Fremantle council made a half-hearted attempt a couple of years ago by introducing half-hour free parking in certain areas, but this did not stop the exodus from the shopping area as the rangers are zealous with folk who overstay.
My particular gripe is the Sunday parking for Jazz Fremantle held in the Navy Club on the corner of High and Pakenham Streets.
Jazz Fremantle operates from 4-7pm every Sunday and the adjacent parking meters require renewal at 5pm, causing inconvenience for both musicians and patrons.
I hope Fremantle council will address these matters to provide a healthy thriving city throughout the year.
Lew Smith
Forrest St, Cottesloe

Let’s go for a win-win
YOUR articles (Herald, March 19, 2016) suggest there is a real possibility we could lose the old Port Stationery building at 75 High Street, to a redevelopment of the site.
After significant conservation and education battles over the past 40 plus years, this surely cannot be the case. Especially perhaps, within the context of the current debate about the boundaries of the West End heritage zone. No-one disputes that 75 High Street is within this zone.
This carries with it enormous responsibilities on the council, to protect the integrity of all buildings in this special conservation area. Yes, there has been significant destruction to this building — the interiors have been very substantially changed; and the exterior facade also.
But at least the facade has retained much of its original scale; and some architectural elements. The City of Fremantle has embraced the Burra Charter as its guiding document in matters relating to heritage, including Setting; Retention; Conservation, Restoration, Reconstruction and Adaptation.
There is an irresistible case for it to do the same at 75 High Street. It’s just a matter of being clear and strong, and allowing its conservation policy to drive the final result.
While not a fan of “facadism” it is true that major internal destruction has already occurred and, realistically, the site development may involve intensification which alters it still further. But this needs to respect the High Street facade and the existing site lines and building parapet levels of the streetscape as a whole.
This is ensured by a facade restoration/reconstruction which derives from both onsite evidence, from photos of the building in its original condition, by new work set back from High Street (to camouflage itself) and to allow the West End heritage area to retain integrity and substance.
Supporters of heritage removal and total redevelopment of 75 High Street might argue it’s just one building and  there are many more. This misses the point, well expressed in the Burra Charter, that a Place; a Setting of heritage significance, loses much by having any of the characteristics making up its special and/or unique qualities destroyed.
There is a possible win-win scenario here. A win for Fremantle, with sensitive external re-reinstatement of the original frontage, reinforcing the streetscape. And a win for the building owner, with building development — a distance back from the facade according to agreed calculation — of the remaining rear portion of the site.
Carl Payne
Bostock St, White Gum Valley

Enkel deal a fait accompli?
I WAS reading through the agenda for the Fremantle council meeting on Wednesday March 23, and I noted the item regarding the Naval Stores refurbishment and leasing to the unknown group Enkel.
I visited the Enkel website and was puzzled by a photo of the Naval Stores on its home page: it went on to describe what will happen to the site, with Enkel fitting out the interior and the council doing the landscaping. How can it be it is so certain the application will be approved?
Again, the ratepayer is being asked to invest in a project that will bring no return. The council will spend $770,000 to get a rent that will only repay that outlay over 15 years. So, ratepayers, be prepared for a further hike in your rates.
Elena Monaco
Marine Tce, Fremantle

Let’s get more kids on bikes!
A READER (“Licence to pedal” Herald letters, March 19, 2016) noted: “Bikes on our roads seem to be an ongoing subject without a solution” and suggested only those over 17 with a driver’s licence should be allowed on the road.
A reasonable benchmark as to whether we have safe roads and good cycling infrastructure is whether you can cheerily wave your children off to school, their friend’s house, or their newspaper delivery round, on their bikes, and expect them to arrive safely.
We have not quite got there yet – instead finding ourselves stuck in the mentality of “the school run” or “mum and dad’s taxi”. Cycling infrastructure must be the cheapest transport infrastructure there is – painting a white line down the side of the road in its most simple form, or segregated lanes if safe driving is not a feasible expectation.
I am sure we can all do better than plotting to ban all cycling children (those under 17) from the road, and consigning any adult without a driving licence to the footpaths.
Pushing children (and presumably adults without a car licence) onto the footpaths is not a safe option for anyone. My son was run over by a car reversing from its driveway onto the pavement – it is way safer to be on the road and visible, than to run the gauntlet of passing dozens of driveways on the pavement, where there is no safe right of way, and crossing multiple roads also.
Moreover, there are not even footpaths, let alone bike paths, between our house and the local schools, so it is naive to assume cyclists can simply “get off the road”. Let’s approach transport for everyone in a positive, considerate and creative manner. Isn’t enabling our young children to enjoy the freedom and fitness benefits of cycling a worthy goal?
Phil Nicholls
Stevens St, Fremantle