FREMANTLE palliative care nurse Lizz Clarke and her family are urging the community to voice their support for the McGowan government’s voluntary assisted dying bill, which started its journey through WA’s parliament this week.

Her husband Colin was diagnosed with rare terminal lung cancer two years ago aged 42, and wants the option to die on his own terms–a gentle peaceful death without uncontrollable pain.

Their lives with their two children, 10 and 14, revolve around chemotherapy treatments and a grasp for a semblance of a normal life.

“My youngest daughter doesn’t remember very much what life was like before his diagnosis. It has been a struggle,” Ms Clarke told the Herald.

“For one week out of every three we don’t see Col very much because he confines himself in bed, since the brain fog, nausea and lethargy from chemo are so bad. In the lead up to chemo there are medical review appointments and blood tests. The week in between is trying to squeeze in a semblance of a normal life.”

Ms Clarke says her husband has insight into how the cancer will take his life and they all want to avoid as much suffering as possible, allowing the children to remember their dad as he is now. 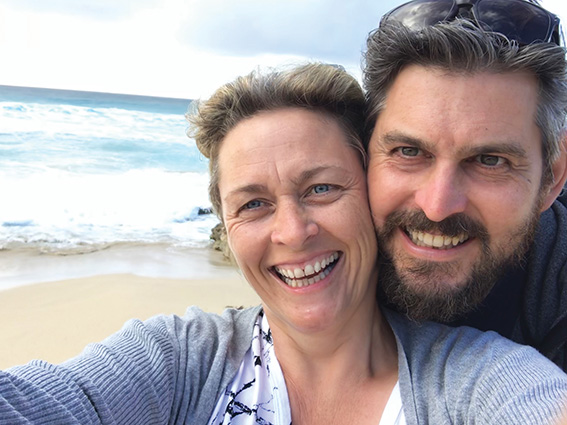 “He was an emergency doctor where he was making life and death decisions every day.

“His brain, his heart and other organs are built for longevity and ultimately his heart will keep beating until he is gasping for breath and beaten by pain.”

“His death is expected to look like suffocation, which is hideous.”

Mr Clarke has been given two years to live, but even if the bill passes, the couple say the system might not be in place for him to take advantage of new euthanasia laws; but they still want to push on anyway, aware that others after them may benefit.

Having witnessed many deaths firsthand as a nurse, Ms Clarke feels she is well-informed of what death for terminal patients looks like.

“Palliative care is built for end of life pain management but so many people still suffer very painful deaths with medications often not sufficient to manage all pain.”

She urges the community to reach out to their politicians, despite any ethical or cultural barriers since it will help those already expecting a grim death to go in peace and dignity.

“There are going to be politicians who don’t believe the VAD should be passed. Having the courage to vote for this will help the terminally ill have the choice to maintain their dignity at the end of their lives.”

Mr Clarke says: “There are gentle and peaceful deaths − the good deaths that most of us would wish for ourselves and our loved ones when the time comes.

“Life is precious – but when there is no hope of recovery, where there is suffering, our focus should be to maintain dignity and the well-being of the patient in accordance with their wishes.”

Parliamentarians are being given a conscience vote for the VAD bill. Ms McGurk will be voting for it.

“I’ll be supporting the bill. It’s the right thing to do and it’s what the overwhelming majority of my constituents are telling me they want,” she said.

“We’re investing additional resources in palliative care but we know there will always be cases where patients are not responsive and continue to experience considerable pain. The bill has been methodically drafted with stringent safeguard following an extensive period of consultation.”