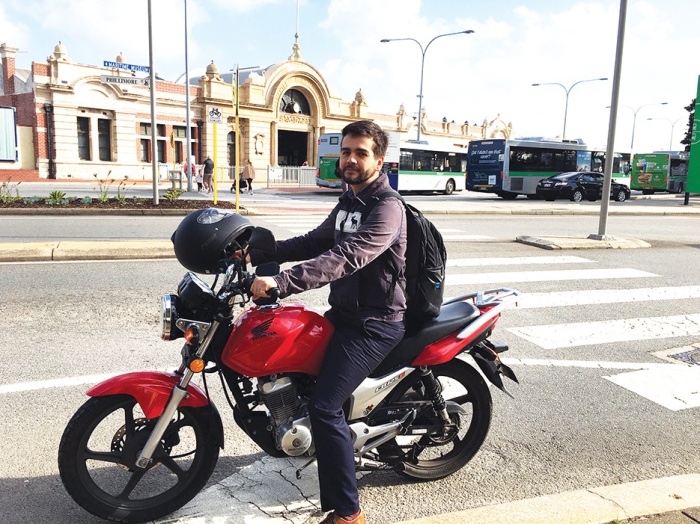 • Alex Ferreira resorted to buying a motorbike after the Perth express train was canned. Photo by Jenny D’Anger

FREMANTLE residents have resorted to driving to work after peak-hour express trains to Perth were abruptly cancelled.

A total of 416 angry commuters have “signed” an online petition on change.org to reinstate the service.

Rebel Carrat posted on the website that she relied on the express train “to be able to pick up my children on time from day care after a very long day”.

The loss of the express was a “huge inconvenience” posted Subhan Dellar: “I have even started driving to the city again.”

Fremantle local Alex Ferreira says it was taking him twice as long to get to work, so he bought a motorbike to do the commute.

He’s an advocate of public transport, but says driving has proved cheaper, quicker and more convenient.

South Fremantle local Liz Lloyd dusted off her car after her commute blew out to 70 minutes.

Hamilton Hill resident Steve McDill still catches the train, but says a number of friends and colleagues drive to Murdoch to catch the Mandurah line because it’s quicker.

Express trains are essential for commuters “and keep cars off the roads and get you to work stress free,” posted a resident on change.org.

A Transperth spokeswoman said the express train was cut on the Fremantle and Midland Lines ahead of the Forrestfield-airport link coming online in late 2021.

She said it had been cancelled so far out because works need to take place on the Fremantle line for the link, and to make “timetable changes all in one hit to reduce the cost and impact to passengers.”

“As Forrestfield services will spur off of the Midland Line (and the Fremantle Line and Midland Line are connected), additional trains will be running on both lines to service demand,” she told the Herald.

She aded that peak-style services had been extended and “early figures actually indicate a net increase in passenger boardings on the Midland and Fremantle Lines since the changes.”

Several Fremantle residents told us the express service had been cancelled without notice in July. We asked Transperth about this, but they didn’t reply.