CCTV images from Kidogo Arthouse caught a burly-looking bloke on a bike making off with the Greg James sculpture around 3.30am on Wednesday, October 9. A little earlier he was also snapped cycling past the Fremantle train station on his way to the area.

• The bike thief makes off with Bella.

Although Bella weighs a hefty 150 kilograms, J-Shed photographer Peter Zuvela thinks the thief might have simply been able to undo a bolt and roll the statue into his bike trailer before making his getaway.

But Mr Zuvela believes he would have needed an accomplice with a car or ute to complete his heist.

Mr James was philosophical about the theft this week, saying that at least the conspiracy theories about Bella’s disappearance had kept Bathers Beach in the spotlight. 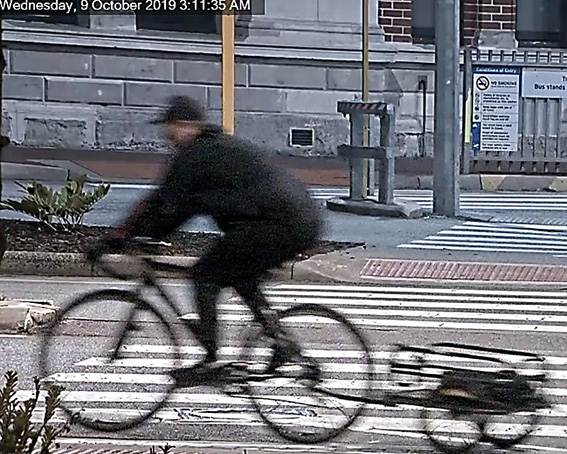 • He was caught on CCTV riding past the Fremantle train station with his trailer just after 3am on October 9.

While there’s a lot of speculation she’ll be sold as scrap metal or propped up in someone’s backyard, a more colourful theory has it that Bella could be chopped up and shipped to China, then put back together again for sale to art-hungry businessmen.

While it seems a little far-fetched, Mr James says there is some form.

A customer of his who owned Bella’s sister statue also owns works by another renowned WA sculptor who had one of his pieces nicked as well. It was later found bundled up in a scrap metal consignment for China, but some effort had gone in to cutting it up so that it could more easily be put back together.