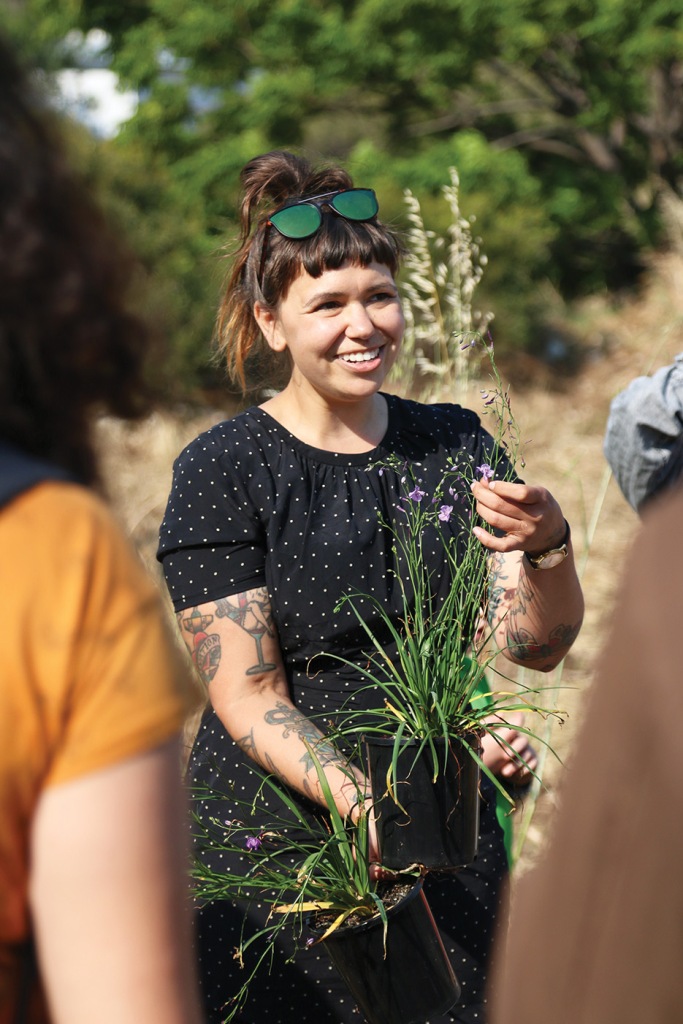 A WHADJUK Noongar woman’s dreams of leading a sustainability revolution through bush tucker took a big step this week, with her first planting day at a Hamilton Hill community garden.

Jacinta Taylor says she hopes to preserve Noongar language and culture through promoting edible plants, but there’s big benefits for the whole community.

“I always remember my dad saying that the bush is nature’s supermarket,” Ms Taylor says.

“It was cultural genocide.

“I want to bring as much of that back as possible.

“For our culture to be rich, for my own ancestors and generations to come.”

About 20 punters gathered on Wednesday afternoon for the first day of planting at the garden, which is tucked behind the historick Randwick Stables – one of the few still operating in the metropolitan area.

Native tubers (potato-like vegetables), endemic chilli’s and youlk (radish) were a few of the vegetables planted in the garden.

The seedlings can be found at Bunnings and North Fremantle nursery APACE, then grown in a bucket at home.

Ms Taylor says she isn’t an expert but isn’t going to let that stop her.

“Part of me wanted to have all the information before I started this but when I tell people I don’t know everything, they say ‘great, let’s learn together’ and that’s what it’s all about – getting the conversation happening.”

She says after the release of Bruce Pascoe’s book Dark Emu, people are wanting more information about Aboriginal agriculture and the gardens are a way to help bridge the gap.

“Linking in with the sustainability aspect has also gotten people interested – this is a really sustainable way of farming because endemic plants thrive in our soils with little water.”

Ballingup woman Leith Bailey recently moved to the area and says it’s great to have a place where she can learn more about Aboriginal culture and connect with her community.
“I have an interest in the culture and the plants after reading some books and learning the health benefits of the food,” Ms Bailey said.
“Community gardens are also a great way to meet new people.”

WITH councils such as Vincent and Bayswater leading the way in Perth’s verge revolution, an environmental group is hoping to convince homeowners that planting native species is the way to go.

“We like to encourage the actual species which were endemic to that area, as it supports the birds, insects and lizards that would normally live there,” Ms Donnelly says.

“Depending where you live and your soil type, different plants will suit, so we give people a guide to help choose the right ones.”

APACE supplies over 450,000 native plants and more than 400 species through its Swan Coastal Plains revegetation nursery to councils, businesses and community every year from Geraldton to Bunbury.

“We are trying to help people develop something that is sustainable but fairly cheap,” she says.

The course is a part of APACE’s efforts to reestablish its community education programs under newly appointed coordinator Joann Heta, but she says there are still some hurdles.

Ms Heta says people wanting more education and training, that requires funding.
“We’ve applied for the Stronger Communities grant which would enable us to assist training for some of the local groups and re-run courses such as weed propagation control, seed collection and the verge design courses,” she says.

“We are also now competing against the private sector which makes it really hard for us because we don’t have [financial] backing.”

But Ms Heta says despite the lack of funds, the team at APACE is reinvigorated under the new leadership.

SPRING is officially in full bloom and the beauty of nature is unfolding.

To check out the array of florals this season, you might plan a trip to Kings Park or Araluen Botanic Park – or simply pop down to your local garden centre.

Waldecks Garden Centre manager John Mossop said some of the best selling flowers at this time of the year are potted colours.

“You can get 130mm pots with annuals to get your petunias, zinnias, begonias, pansies and a lot more,” Mr Mossop says.

“We have an extensive range of fruiting varieties with dwarf trees, citrus trees, blueberries and natives.”

“Back in the 70s in my landscaping days, people were throwing the indoor stuff out because it was all too hard and starting to destroy the brickwork.

“It’s of course now driven by Instagram with the younger generation out there flashing pictures. Bloom envy is driving a lot of sales.

Mr Mossop, a 15-year veteran of Waldecks, says nurseries haven’t been spared the difficult times facing retail but has hopes the indoor revival can fertilise the economic green shoots.

“It’s the government incentive to green everything from high rises to rooftop gardens and vertical walls,” he says.

“There use to be an unwritten rule in the old days where you spend 10 per cent of what you bought your house on for the landscape, but a lot of people don’t do that any more.

“A lot of the houses are smaller so they’re targeting areas like patios, alfresco areas and obviously the front of their gardens.”

Mr Mossop says it’s easier to be a green thumb these days, with more on offer than a hopeful bit of sheep poo over the garden.

“Now we have things like Soil Solver Clay Plus which is a WA product and transforms your sand into soil and you are adding some organics to that and fertiliser,” he says.

“You still get some oldies that come in and look at you a bit strange when you ask if they used fertiliser.

“There is still a belief out there that you don’t feed native plants.

“Everything needs feeding because if you feed regularly, your garden is going to be healthy and it’s going to perform.”