ANOTHER of Fremantle’s public artworks has been vandalised by thieves who’ve pinched its bronzed top.

The memorial to WA’s first premier John Forrest, erected in 1947 on the centenary of his birth, is tucked away in the little-known N Warrall Park on Beach Street, so no one’s sure exactly when it was attacked.

Regular Herald reader Roger spotted the missing metal globe from the top of the statue after having a coffee with a mate at nearby The Kiosk cafe this week and reported it to Fremantle council.

It follows last month’s theft of the $100,000 sculpture Bella from Bathers Beach, while a bronze plaque at the Round House has also disappeared.

Roger reckons the city’s “pot heads” are to blame; selling the bronze for scrap to fuel their habit.

“There’s a hardcore criminal element with the drugs, and that really puts the mockers on Fremantle,” he said.

Fremantle’s acting mayor Andrew Sullivan says the thefts are an unfortunate “sign of the times”. 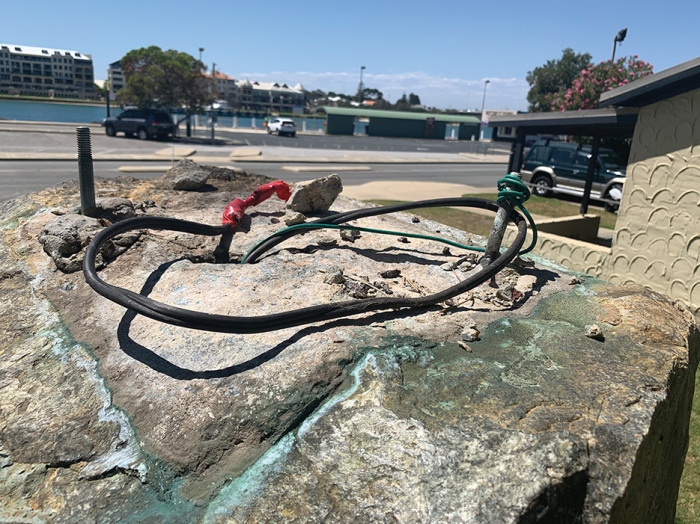 “I think there are some recyclers out there that need to be challenged about the dodgy looking bloke that keeps coming in with stuff to sell,” Cr Sullivan said.

It wasn’t that long ago a local church had its copper downpipes pinched, he said, while houses only need to be abandoned a couple of weeks before they’re targeted.

“I have heard some horror stories of people going into live circuit boards to get the wires.”

“Because they’re not just stealing from the sculptor, they’re stealing something that belongs to the whole community,” James said.