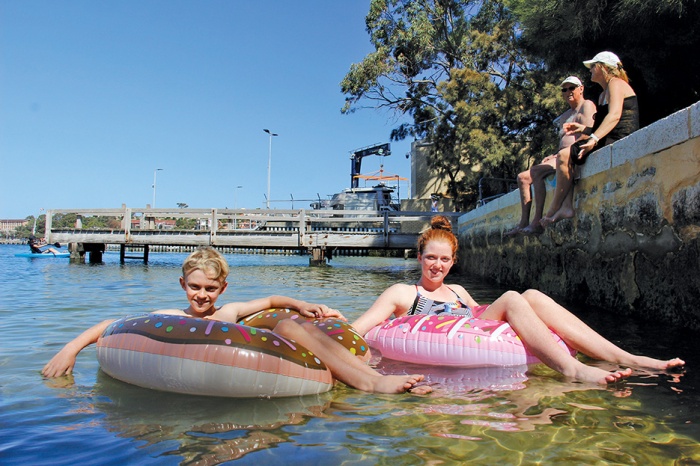 Talia and Jay Wilkinson enjoy a dip at Harvey Beach with mum Melissa and granddad John. Photo by Steve Grant.

THE proposed demolition of a much-loved North Fremantle jetty just days before Christmas has stirred up the local community.

Public access to the Harvey Beach jetty has been closed since July because one of its pylons has been completely eaten away while the others are also badly corroded.

But residents say the council kept them in the dark when it planned to remove it less than a week before Christmas – when many were away on holidays – and without discussing a possible replacement.

The council has acknowledged it’s considering a floating pontoon as a potential replacement and it could take up to a year before anything is in place.

“What’s the point of coming down to the beach if there’s no jetty,” said 14-year-old Talia Wilkinson whose family regularly come for a swim.

Her younger brother Jay said he’d not be too unhappy about a pontoon, but the rest of the family say it wouldn’t be the same as a jetty at the beach, particularly as dad Richard loves a jump off the end.

North Fremantle Community Association convenor Gerry MacGill said it was “disappointing that the jetty could have disappeared without prior notice in the week before Christmas”.

Mr MacGill said there had been a jetty at the beach for more than 100 years, though the original – which hosted steam paddlers – had been demolished to make way for the water police during former premier Brian Burke’s reign.

He said when he circulated an email about the demolition to association members, there had been an outpouring ranging from “sorrow to anger”.

“In my view the Harvey Beach jetty is an invaluable community resource important not only for continuity with the area’s history but for the endless fun it provides to adults, children, fisher people and swimmers in Fremantle,” one wrote.

“A diving pontoon or a floating platform would be a poor substitute for this simple but beautiful piece of architectural and industrial heritage.”

The Herald has heard that many people are simply jumping the barrier tape and continuing to use the jetty.

“The jetty was closed off to the public in July last year and the city is currently going through a permit process with state government agencies prior to its removal,” Mr Tattersall said.

“The city is looking at a range of replacement options including another jetty, a floating pontoon, and a jetty with a gangway to a floating pontoon. These options are all subject to budget with costs and potential funding sources for the various options still being finalised. It is likely that this process will take six to 12 months.”

The jetty adds to a growing list of maintenance issues facing the council, which needs to find at least $1million to fix up falling rocks at Arthur Head and repairs to the Round House and several million more to deal with erosion at Port and Leighton Beaches.