Priorities
I PICKED up The West Australian recently, which reported on a pieces of asbestos washed up on a local beach and the concerns for tourism by the minister for all asbestos-related threats to the public.
So I had a look at the state budget for asbestos management and money allocated. The amount – $6 million dollars.
Enough to run a small government department and a few inspectors, not much else.
Victoria has a real budget of $200 million to get rid of asbestos, mainly in schools and public buildings.
South Australia has a budget of $17 million
I read in the report that there are still 17 schools in WA with a risk rating of two.
Hundreds of other schools are contaminated, but according to the report are under observation.
The risk scale is one to nine.
One is the worst; nine the least-risk problem.
The state government has known about this  situation for many years.
I hear we have just allocated $100 million to give the WACA a face lift.
I think that’s really embarrassing – where are this government’s priorities?
J Paterson
Wood Street, Fremantle

Personal responsibility
PEOPLE are deeply upset about what’s going on in Australia: kangaroos trapped in barbed-wire fencing while attempting to flee the fires, cows and sheep being cooked alive in the flames, and an estimated one and a quarter million or more animals now killed in the conflagrations.
Now, we add shooters being ordered to gun down thousands of camels desperately searching for water.
There is something that can be done – a long-term fix for this horror and the others that will inevitably follow, as prolonged heat and drought have extended seasonal wildfire periods around the world and we’re facing mass extinctions, rising sea levels and record-breaking temperature changes.
It’s imperative that we take personal responsibility for the protection of our planet, and by far the easiest way to do that is to stop eating animals and go vegan right now. The UN has stated that meat consumption must decrease by as much as 90 per cent in order for us to avoid the most catastrophic effects of climate change.
This requires zero governmental initiative and no promises from giant corporations – it just means choosing to leave animals out of our shopping trolleys.
It’s a simple but revolutionary action that says, “We will not let this planet and countless sensitive animals die on our watch.”
We urge all caring people to join the vegan movement.
The Earth and all its human and non-human inhabitants depend on it.
Ingrid Newkirk
Founder, PETA Australia 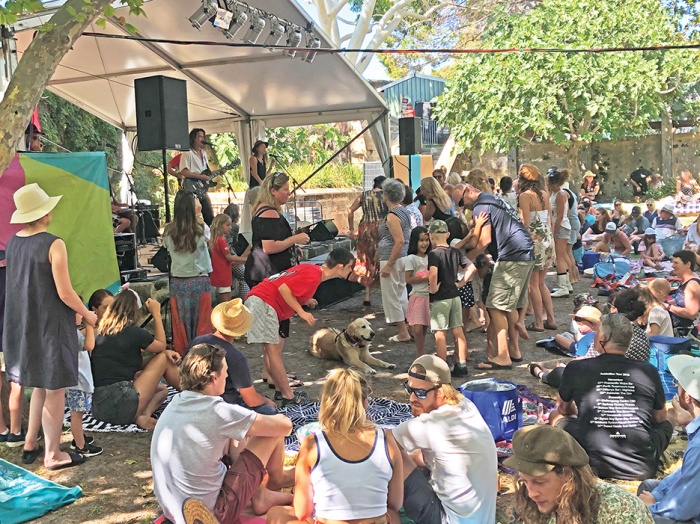 Sunday sesh
THIS photo (above) epitomises the spirit of Fremantle, I think.
Thank you Dan Howls and your brilliant band for a great afternoon of brilliant music and what a beautiful venue the Fremantle Arts Centre is.
Bendigo Bank are to be congratulated for offering these free concerts every Sunday between 2pm-4pm.
I will be back and will be watching Dan’s continued progression.
Bruce Fulton
via email

Turning over a new leaf
Where have all
the birdies gone?
Long time passing.
Where have all
the birdies gone?
Long time ago.
With apologies to Pete Seeger.
I refer to the lack of appearance of the nesting fairy terns at Rous Head in North Freo.
It seems that well meaning people have put little numbered pegs on the nesting site in an attempt to bureaucratise the birds, in the manner they organised our dinghies that previously lounged on the North Freo riverbank.
I presume authorities have the names and off-season addresses of the birds connected to the numbers to send them an invoice for nesting fees.
Twas a spring morning in late November while cycling I spied a large flock overflying the nesting site and I heard one say to the other, “nah, lets go somewhere else”.
And they did.
John Showell
North Femantle