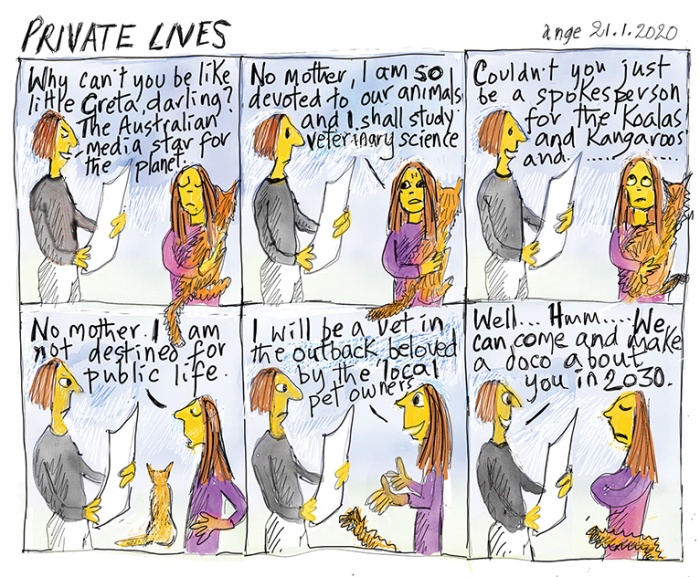 Disappointed
I WAS surprised and disappointed to read the “One Day Wonder?” article in last week’s Herald, expressing views of Tangney MP Ben Morton.
Disappointed first that the Herald chose the front page for this and also for the views expressed.
I don’t know where Mr Morton was on the day, but I was at a rich beautiful event, starting with a very moving morning smoking ceremony incorporating very inclusive views and participation in an atmosphere that was priceless.
This was followed by a day full of events in a small community setting and closing with music and dancing. There was lots of opportunity to talk with indigenous people and elders.
It’s a gem of an event that is not about money, but a day that holds the precious kernel of something real to build on in the future.
Went home full to the brim. I got my moneys worth. Congratulations to Brad Pettitt and Fremantle council.
Peta Miller
Walter Street, East Fremantle

Vanity projects
Finally, the Herald has called out the Fremantle Council regarding the failed social engineering of its alternative Australia Day activities.
Your tummy-tickling headline “One day wonder?” (Herald, February 1, 2020) should have read something like “Disgraceful waste of ratepayers’ funds” or “FCC’s appalling Oz day financial mismanagement” or “Mayor on wrong Oz day tram”.
Can we expect some more probing into this mob?
What about a double-page spread putting the council in the spotlight about this and other big-ticket spending items where ratepayers’ funds are poured down the sink on a myriad of vanity and self-serving projects?
Here’s a couple of lines of questioning:
• What was the true cost of the failed “Day”?
• Is this alternative “celebration” being driven by councillors or by FCC officers?
• How much is tentatively set aside in next year’s draft budget for this or a similar extravaganza?
• What is planned and what funds are tentatively set aside for those Fremantle ratepayers who simply want a conventional Australia Day experience next year?
• Please explain the proposed commercial arrangements for the leasing of spaces in the new Kings Square development?
• What is the extent of rent holidays and reduced charges for these spaces and over what period of time do these arrangements extend? Please don’t hide behind commercial in confidence.
• What happens to ratepayers if these arrangements fail to materialise and fall short of budget?
• Is the council being advised by senior commercial real estate professionals or is it simply “winging it” as it has done in the past with its commercial property portfolio?
• Did the state government departments about to move in, pay a commercial rent?
• What is the FCC doing about the dozens of empty commercial spaces in every corner of the city?
• In this context does the mayor believe that the “build it and they will come” philosophy of Kings Square will alleviate the existing decimation of Fremantle’s retail sector? If so, what’s the evidence?
• It’s encouraging that there appears to be some big players considering investing in Fremantle. Is the council going to apply its usual planning tourniquet to their projects?
• Please outline the fast track of approvals that might be applied, so that these things might happen in our lifetime?
I’ve lived here and paid rates for more than 35 years and I love the place but I, and many others, have had enough of the failure of the council to deliver the basics of a good return on the money we are forced to invest in it.
Vern Reid
Fothergill Street, Fremantle

Boot ‘em out
THANK you Anthony Brown for your letter in the Herald “Rates black hole” (February 1, 2020), advising that the Fremantle mayor and councillors have approved a tenant leasing 828sqm of the Kings Square development on the basis they don’t have to pay rent for the first three years and the ratepayers are going to pay the tenant $500,000 towards the fit-out of the building.
If ratepayers ever needed a good reason to vote the mayor and councillors out of office at the next election, this is it.
In fact, the minister for local government needs to sack these incompetent money managers and arrange an election now.
Several councils have been sacked recently and it is Fremantle’s turn now.
George Boot, former long-term
South Fremantle resident
and current ratepayer

One day defence
HOW unfortunate and disappointing was last week’s front-page story “One day wonder?” in the Herald.
Who knew that we had a ‘federal minister responsible for Australia Day’?
His views certainly did not reflect our experience of the One Day event in Fremantle.
The smoking ceremony on the beach was a very moving event in which a large community was able to participate and gain a sense of belonging.
It was filled with empathy and compassion for everyone.
Every time I am confronted with the gracious welcome and embrace by Aboriginal people of those who have immigrated to the place they have inhabited for millennia, I am struck by their generosity, despite how they have often been treated by the colonisers and other more recent arrivals.
We did not stay for the entire day but similarly found the remainder which we experienced, including the closing ceremony, a most inclusive and heart-warming experience, enjoyed by people of all ages and creeds.
It is a shame Tangney MP Ben Morton was unable to come and experience for himself the sense of inclusion of an event which was ‘less about celebrating and more about reflecting’, and where we were able to ‘listen to each other and respect each other’s stories and contributions’ as he apparently aspires to.
One of the speakers pointed out that while the landing of the First Fleet represented incredible trauma and very little to celebrate for Aboriginal people, the same probably applied to those who were shipped here as convicts for the most petty of offences; transported to what was a foreign and hostile place to make a new life in in harsh conditions.
It appears also that not only Fremantle mayor Brad Pettitt, but also the organised Fremantle business community was entirely happy with the Fremantle event.
It is not necessary to spend obscene sums of money wastefully on fireworks and the trauma this causes to house pets, wildlife and people. Even if we are satisfied it doesn’t present a fire danger, in an environment ever at greater risk because of our refusal to acknowledge the damage we have been doing to our planet.
I am satisfied that One Day in Fremantle will continue as a celebrated and inclusive event.
And that we will in time look back on it with pride as one of the seeds of a better future.
Louis de Villiers
Stevens Street, Fremantle

Characterless Freo?
LOOKING at the building progress on what used to be King’s Square, comparing it to the numerous artist’s impressions, I feel that there will be little left of the old square. “Brad Pettitt’s Palace” will take up the bulk of it, overshadowed by the new government offices.
As for the proposed licensed premises, with restaurants closing down or changing hands on a regular basis, is it really required?
For too long this council has run the city on numerous thought-bubbles emanating from the mayor’s office and he appears to live on another planet compared to the rest of us.
I would like to think all the disruption and chaos will be worth it in the end, however I have my doubts.
The character of Fremantle is being destroyed bit-by-bit, and we will be left with a colourless shell of the vibrant place it once was.
Geoff Dunstone
Carrington Street, Palmyra

Dunny watch
A QUESTION for Fremantle mayor Brad Pettitt.
Are there any plans to provide toilet facilities at the South Fremantle Dog Beach (adjacent to the Fremantle Sailing Club)?
This is one of the most special places in Perth, where a huge cross-section of people and dogs congregate in harmony and interact in such an amazingly positive way.
This beach deserves the facilities as its popularity continues to grow.
Mayor, can you share if there are any plans for toilets, and if not, why?
Bruce Fulton
Address supplied