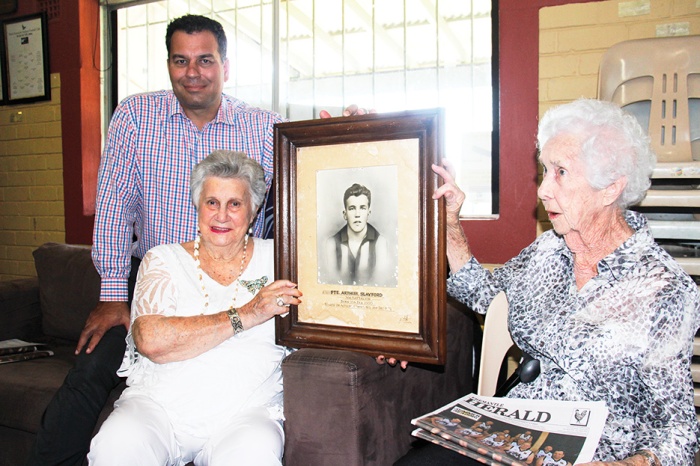 • Arthur Slayford’s sisters Molly and Maisie with trek leader Adam Colginare and a portrait of the slain soldier which has hung undisturbed in the Maggies’ clubrooms for more than 50 years. Photo by Steve Grant.

TWO sisters whose last sight of their brother was watching him march off to war nearly 80 years ago have thanked a group of footy mates about to slog the same rough track where he died in tribute.

Arthur Slayford’s younger sisters Maisie and Molly still recall the devastating effect their brother’s death had on their large family, saying their father never really recovered from the news.

Pte Slayford was killed on the Kokoda Track on December 6, 1942 during heavy fighting against the Japanese near Gona and Haddy’s Village.

The battle, through thick mud and mountainous terrain, was so intense that when the 39th battalion was withdrawn a month later, there were just seven officers and 25 infantrymen left.

Molly was the youngest of

the 15 Slayford children, who all grew up in North Fremantle near the old soap factory and attended the local primary school.

Now 89, she was just 10 years old when Arthur signed up and vividly remembers the day they received the telegram about his death.

“It was just dreadful for my father, he never really accepted the news that his son had died,” she recalls sadly.

Molly, who is seven years older than her sister, already had a lot on her plate; following her mother’s death in 1936 she’d had to take over looking after her younger siblings. She says that task got even more difficult after Arthur’s death.

“It broke up the family circle,” she said.

Last week the pair met the leaders of a group from the North Fremantle Football Club who’ll are trekking the Kokodo in April in memory of past team mates who fought and died there.

In previous years the club has travelled to the killing fields of western Europe where many of their club mates are buried.

With a family of 15 kids, it didn’t take long before a host of new connections were made as they thanked the trekkers; someone’s grandson was best mates of another’s nephew.

They were presented with a framed portrait of Pte Slayford, which has hung undisturbed on the clubroom walls for more than 50 years. This year would have been his 100th birthday.

Trek leader Adam Colginare discovered that he’d grown up literally next door to one of the Slayford siblings in White Gum Valley. He said they’d been hoping to drape a Magpies’ footy jersey over Pte Slayford’s grave, but after discovering that would constitute a war crime, have decided a photo might be a more appropriate acknowledgement.

Mr Colginare said they were really looking forward to the trek, which will coincide with Anzac Day, as they’d enlisted a former SAS soldier with extensive knowledge of the battle as tour guide.