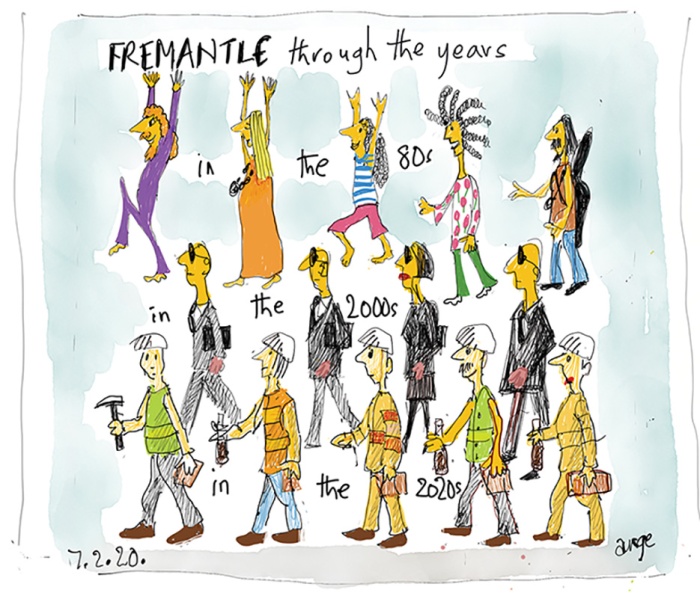 Funding fail
IT would have been more apt for last week’s front page headline in the Chook to read “John Curtin College funding frustration” rather than “Bush parking anger”.
The article is a blatantly biased piece of reporting that invites no response from the college principal Mitch Mackay, nor takes into account the struggles faced by an ever burgeoning school population without the necessary commensurate funding from the government to provide permanent classrooms.
I am a parent of a John Curtin College student, and au fait with the challenges faced by the college with its aged infrastructure and lack of suitable land for demountable classrooms.
It would appear that the college is the cinderella when it comes to government funding – other high schools have received millions in dollars to provide new classrooms and upgrade buildings.
I suppose, despite Mr Mackay having a master plan to accommodate ever increasing enrolments, that Fremantle being a safe Labor seat means that such a plan may never come to fruition.
Mr Ross would be more accurate in blaming the withholding of government funds to the college, rather than it not having a ‘master plan’ to deal with exploding numbers of enrolments.
Mr Ross would be well to contact the education minister with a ‘please explain’.
Ann Roberts
Curtis Road, Melville

Toilet trouble
ASKING if there are plans to build a toilet at the South Fremantle Dog Beach is perhaps wishful thinking.
What would be a good idea is to upgrade or at least perform regular maintenance on the existing ones attached to the café.
They are used daily, and during holiday and weekends they are overused.
Special events see them being even more stretched; the men’s in particular is a constant source of complaint.
I recently sent in a very tongue-in-cheek photo of a number of gentlemen with their backs to the camera.
The underlying message being, “This is what we’ll have to do if these toilets aren’t sorted”.
They are cleaned but they need regular maintenance: the tap on the handbasin in the ladies is missing in action, one of the shower doors has no lock, and the toilets themselves have a couple of doors with dodgy locks.
The disabled is frankly by today’s standards illegal. It’s also used by able-bodied people because the gents is too disgusting for use, according to the man who walked out the other week, as my disabled husband was waiting to go in his wheelchair.
The shower has no hand rail, there is no fold-down seat, and the bench on the far wall had a central support strut that was so badly rusted it was swinging loose.
I rang the council and told them of this; it was then sawn off, so at least no-one will cut their feet on it.
However the bench now has no support. Hopefully it isn’t going to collapse if weight is applied to it.
We all know the building is old, but this is a public facility that should be regularly maintained.
It is a popular beach and on weekends and holidays it is full. Those of us who are lucky enough to live here, are tired of apologising for the state of something that should be so much better. As well as a funny photo, I’ve begun a collection of signatures to show how many people would like to see an improvement.
The signatures are far ranging in location, proving just how many visitors the area has.
When we go to a new place it is the spoilers that are remembered –   South Beach is lovely but those toilets are disgusting.
Is this the impression that the council wants to give to tourists?
Nice place, second rate facilities, don’t bother going back again.
So as a suggestion, close them for a really decent upgrade.
Portaloos are fine for us regulars, while work is ongoing, and even better council could arrange a meeting at the café with people who live here.
Then we can tell you what we want done, rather than you putting in what you think we want.
Lyn Shipp
Breaksea Drive, North Coogee

Scattergun punishment
LOCAL government minister David Templeman wants to punish Cockburn council as a result of the action, or non-action of one councillor (“Templeman to read Cockburn the riot act”, Herald, February 8, 2020).
Hmm – sounds familiar. Oh yes, 70 years ago at my boarding school, all the girls in the dorm were punished because one girl had not made her bed properly.
Move with the times, Mr Templeman. One punishment per crime is a fair statement.
Although with a fine and suspension already imposed on one individual councillor, this concept has already been exceeded.
Jan de Groote
Address supplied

Laura’s tree
WE moved to Smith Street in 1990 and became friends with Laura our elderly widowed neighbour.
Laura and her husband were early residents of the street and she would tell me stories of the changes and development in the street.
They had lived through the Great Depression and he had experienced a rough time in World War II.
I am thinking they must have moved there in the early 1950s.
Original greenies of Fremantle, her husband transformed the backyard into a huge vegetable plot.
When he died this vegetable plot was not manageable and Laura asked a young man to come and plant trees that would attract birds to the block.
Once again I am guessing this was 50-60 years ago.
A flowering red gum was planted which Laura cared for and maintained.
When we arrived in 1990 the birdlife in the street was amazing and Laura’s now massive flowering gum was an attraction to a chorus of birds, bees, insects and lizards.
Laura had a passion for the doves and would leave birdseed out daily for them so they wouldn’t miss out.
When we visited Laura in the palliative care unit at Hollywood hospital in the early 1990s, she asked me to look after her birds
Over the years the bird life has changed. We still get the cockatoos, Carnaby’s occasionally, the pinks, whites and blacks, rifle birds etc and it is not unusual to see at least nine different birds in the garden in the morning. With increasing development in the area we rarely see the silver eyes, doves and willy wagtails, and small birds are decreasing.
Larger territorial birds and kookaburras are moving in to search for food, water and survival on Smith Street.
The street is also lined with Norfolk Pines and there are some beautiful gums in back gardens.
Many of us are keen gardeners and always have water readily available for the birds.
However Laura’s tree is probably still the star attraction in Smith Street for the birds we see and care about.
The Fremantle Council has recently approved the destruction of Laura’s tree.
The Freo alternative plan, which has included Smith Street in its zoning, allows for two extra buildings in a backyard and the one in question will be bulldozed and all thee trees will go.
Laura’s tree is collateral damage and another substitute will be considered.
The idea of Judas trees (ironic) and the deciduous erratic flowering Illawarra flame tree have been suggested.
It will take years to replace the, canopy, nesting holes (if ever) and the biodiversity of a huge 50-60 year flowering gum. That is a given.
No amount of deep planting or any tree can replicate a 50-60 year old gum.
Wildlife
There is nothing positive for the current wildlife with the destruction of this tree.
Perhaps the “Green Council” could actually assess and look at blocks before deciding what is suitable for their urban infill ideology.
Removing such a beauty of a tree is disappointing after plans have been submitted and approved.
An architect at the council’s planning meeting, described Laura’s tree as dangerous.
Animals and humans can be dangerous, but trees? Potential hazards maybe.
There has never been an intent to remove Laura’s tree before the idea was sown to develop this block.
There has been no mention of any disease in the tree or damage to people or buildings that I have known.
Perhaps Laura’s tree is just dangerous to developers, architects and town planners.
It has not been dangerous to the bird life on Smith Street.
We have seen the loss of habitat for birds and wildlife in Australia with the recent bushfires.
Perhaps now is time for all councils to reassess the bulldozing of giant trees and appreciate our leafy gums and birds over subdivisions and profits, and random urban infill close to public transport.
It is time to think about what we are really destroying and creating for future generations.
Sally Lawry
Smith Street, Beaconsfield

Scrambled ethics
MOST people don’t know the secret ingredient of egg dishes – unimaginable cruelty.
Egg producers consider male chicks to be an unwanted by-product, because they cannot lay eggs and are a different breed to chickens raised for the flesh on their oversized breasts and legs.
They are therefore routinely killed by being thrown, live, into shredders or gassed.
The French government has announced it will ban the shredding of live chicks by the end of next year, and we hope other nations will follow suit.
The sisters of those male chicks, however, will continue to endure a hideous fate as long as people eat eggs.
Intelligent, curious, and easily frightened hens are commonly kept in extremely crowded and filthy conditions and are often painfully mutilated when the ends of their sensitive beaks are cut off.
They, too, are slaughtered, when deemed no longer fit for egg production.
Shoved into small crates, they endure a harrowing journey to the slaughterhouse, where their throats are cut, often while they’re still conscious.
The best way to help chicks is to make the ethical decision to stop eating eggs.
Mimi Bekhechi, campaigns strategist
People for the Ethical Treatment
of Animals (Australia)