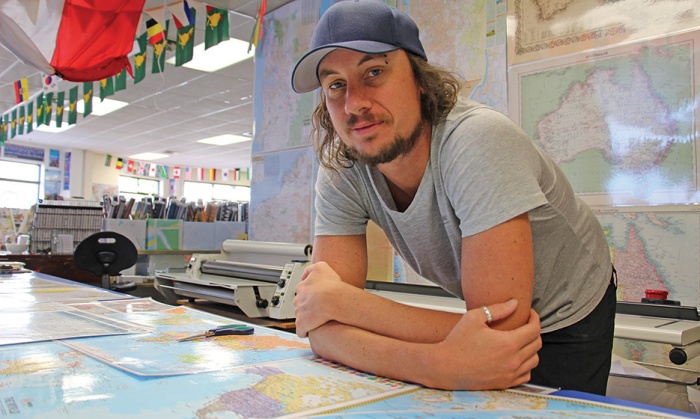 Chris Boichel says he grew up in The Map and Chart Shop.

ICONIC Fremantle business The Chart and Map Shop will have to relocate after a hard-hearted landlord defied prime minister Scott Morrison and sent an eviction notice over late rent.

The Collie Street business has been operating for 25 years and current owner Chris Boichel said the eviction was “breaking my heart”.

Mr Boichel told the Herald they had been struggling for some time and the Coronavirus crisis had been particularly tough.

“It’s not the first time we have been late with rent, but we always get there somehow,” he said.

The landlord’s default notice was delivered late March – just before Mr Morrison’s announcement that he would enforce a moratorium on business evictions related to the Covid pandemic.

Mr Boichel said he ran the issue past a couple of lawyers who advised him that while there was a slight chance of a win in court, it would inevitably leave him with a big legal bill and debts. With that in mind he says there’s little option but to pack up and try to find somewhere else.

He was also reluctant to pay more rent to his landlord.

His first call was to Fremantle council, which helped rehouse other important local businesses New Edition and The Record Finder in its own buildings when they faced closure, but he was told there was nothing suitable available.

On Wednesday he checked out another shop which was promising, but it’s smaller than the space he’s currently in and he says it will require some deep thinking over the weekend.

He has until the end of the month to move out.

Mr Boichel left an emotional message on the company’s Facebook page that captures why he’s taking the eviction so personally.

“Near on two thirds of my life have been in this building,” he noted.

“From the early days watching dad lean against the counter talking boat with the saltiest of dogs (I wish he was still here, he always knew what to do), through the times after mum and dad retired when we were still small and my sister and I would fill our days racing some crappy crossword or attempting to memorise all the capital cities (my favourite is still Ouagadougou), to the heady days before the likes of Amazon stomped on everything and into the struggles of modern retail.

“All of it has been in this place.

City ward councillor Adin Lang told the Herald he was getting reports that half the city’s landlords were showing sympathy to their struggling tenants, while others were playing hardball.

“Some are telling me they haven’t heard from their landlords in weeks,” Cr Lang said.

When the Chook mentioned that some of the city’s own tenants were last week calling for relief after only being offered deferred payments (“Business wants Freo council to dig a bit deeper,” Herald, April 4, 2020), he said the council was prepared to negotiate with individual business to ensure they’d survive.

“We’re all in this together.”

And while landlords are being urged to show some mercy from the prime minister down, the Herald understands tenants in one local shopping centre have just been hit with a 4 per cent rent increase.

DESPITE many retailers in Fremantle closing their doors due to Coronavirus, a local insolvency specialist says so far they appear to have kept the economic wolf from the door.

David Spencer from Business and Insolvency Solutions said while he’s helped a number of business wind-down, there wasn’t much evidence of widespread insolvency.

“I can only surmise

to return when business conditions improve,” he said.

Mr Spencer has produced a Covid survival guide (and what to do when that becomes impossible) for local businesses.

Here’s a summary of his main points, but he’s gone into great detail about a whole lot more. For his full guide, head to http://www.fremantleherald.com

• Notwithstanding the six-month moratorium on director liability

a “head in the sand” approach. A proactive approach may save your business,

• You should increase your monitoring of your business cash flow and working capital,

• Engage with your accountant, bank, and other financiers sooner rather than later,

• Seek professional advice when the crisis is on the horizon, not when it’s at your front door.

• While the financial support and debt deferral initiatives announced by the federal government will certainly offer finacial lifelines, already struggling business owners who put off making crucial decisions as a result of this recently announced grace period risk merely postponing the inevitable.

• Plan for the eventual re-establishment of ‘Business as Usual’. Debt deferral with no exit strategy could result in business collapse.