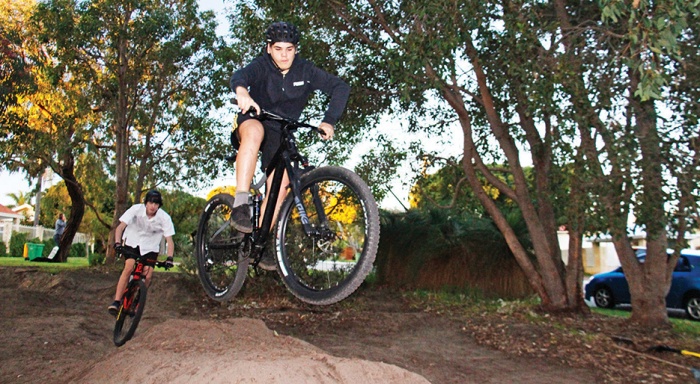 When local residents were first made aware of plans for a $2.5 million bike trail in 2015, they believed it would be confined to an unused quarry in the northern section of the park.

Instead, the local council’s concept plan released in May, proposes a vast cross-country network through about 60 hectares of the park.

“I want to make people aware that this is a massive undertaking,” a regular park user told the Herald.

The resident, who asked not to be named, fears “people are not aware of what is going to happen,” that “the bush will not recover and [the park] will become a dust bowl”.

“culmination of extensive community consultation”, and the trails’ extent was clear in the Manning Park Master Plan.

The company says nearly all of the 765 respondents supported the Manning Park bike trails, though the resident said many weren’t from Cockburn and the majority identified as mountain bikers. She was joined by several others who criticised the consultation as not capturing the real views of the wider Cockburn community as a number hadn’t seen the survey advertised.

Mr Beaton maintains that the survey was “promoted in a number of a ways including letters to adjacent residents,” and reminds the community that “the City will take feedback”.

Dr Jennings said the park is “zoned for conservation … not a wasteland waiting to be developed”. He has already written to the council expressing his concerns that the trails impinge on sensitive areas of the park protected under conservation laws.

“Consultants are not environmentalists,” he told the Herald.

Dr Jennings said the proposed trails run along one of the last remaining limestone ridge habitats in the Perth metropolitan area, a rare remaining habitat of a “high priority” protected species, the Carnaby Black Cockatoo.

Mr Beaton argues the trails are partly in response to tackle existing environmental damage in the park: “A majority of the [proposed] trails already exist and have been constructed by mountain bikers without permission,” he said..

One passionate nature walker, who has frequented the park for 15 years, told the Herald she had witnessed people walking into the park with drills, and sighted “metal” jump ramps “drilled into nurse logs and ancient limestone”.

Local horticulturalist Theresa Spence agrees the unauthorised trails are “a real problem” but doesn’t think 15km of track cut through the bush is the answer.

“The whole ecosystem would be damaged,” she said.

Ms Spence said bobtail lizards “like to sunbake” on exposed rock and would be squished by bikes.

Dr Jennings fears that elderly people from neighbouring aged care home Villa Dalmacia will have a greater risk of injury if they go for a bush walk, as there are a couple of sections where bike and walking trails cross.

THEIR first foray into local politics was an encouraging success, says a group of young Melville mountain bike enthusiasts.

About 20 cyclists, their parents and residents living across the road from Art Wright Reserve met Melville mayor George Gear, CEO Marten Tieleman and the city’s youth and community officers on Tuesday afternoon.

The meeting was called after residents raised concerns about the environmental damage, and safety fears, from a makeshift bike track the kids have created in a corner of the bushy reserve (“Near miss warning,” Herald, June 13, 2020).

Jack Joyce said the council team had offered up some “exciting options”.

They included pop-up skate and pump tracks, and the potential for a nearby mountain bike track.

Fellow rider Cooper Whiting said there wasn’t a lot on offer for local kids who are into off-road riding, which made Art Wright Reserve important. He’s excited about Cockburn council’s proposed 15km mountain bike track in Manning Park but says Melville’s on the right track trying to create some smaller, local facilities.

“That looks like it will be really amazing,” he said of the Manning trail, “it’ll be perfect for the weekends, but most of us are having to come here during the week.”

Jack agrees, saying it can take up to an hour to get ready and travel to the existing off-road tracks, which makes it impossible after school.