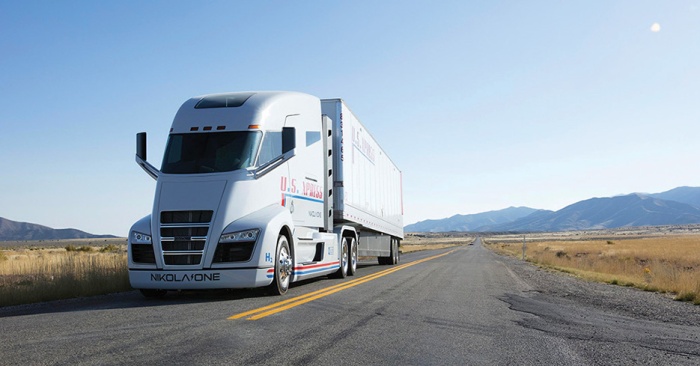 Nikola Corp’s long-haul hydrogen trucks caused a stir when the company traded on the US Stock Exchange for the first time – but you can’t get them here yet … and where would you fill one of these buggers up?

FUTURISTIC hydrogen technology that could bump off stinky diesel trucks is on the horizon, but it could be at least a decade before it starts having an impact.

The Herald this week takes a look at where the ‘H Dream’ is up to, following three locals mayors last week calling for a fleet of clean machines to service Freo’s port and rid the suburbs of smog (“Mayors: Ban old trucks,” Herald, June 27, 2020).

WA’s abundance of land, renewable energy resources and skilled workforce has put the state in an enviable position to meet the growing global demand for renewable hydrogen, according to the WA Renewable Hydrogen Council.

The Morrison government recently committed $70 million through the Australian Renewable Energy Agency to help clean up the country’s hydrogen production; currently most is produced using big polluters like coal-powered generators.

The aim would be a cost-competitive alternative to fossil fuels, he told a Future Direction in Energy Technologies conference in Sydney in February.

“The first specific goal will be H2 under 2,” he said. “That is hydrogen at or under $2 per kilogram. That’s the point where it competes with alternatives in large-scale deployment across our energy system.”

Global lobby group Hydrogen Council analysed the entire hydrogen value chain across the US, Europe, Japan/Korea and China to come up with an estimate the its cost would halve in the next decade.

Closer to home accountants KMPG Australia released a discussion paper in October last year which claimed “half of Perth” could be powered by hydrogen within 30-40 years, including transport and the city’s current gas and electricity needs.

“Getting costs down will be key to establishing Australia as a world leader in the hydrogen sector,” Mr Taylor said, adding it could be a future driver of the Australian economy.

It has potential for “domestic uses, such as blending hydrogen into local gas networks and heavy-vehicle transport use, to exporting Australian-made hydrogen to our key trading partners, like Japan and Korea”.

“An Australian hydrogen industry could create more than 8,000 jobs and generate about $11 billion a year in GDP by 2050,” he said.

Back to trucking and there aren’t any hydrogen cell models readily available in Australia, but just a fortnight ago shares in US company Nikola Corp doubled during its first week as a public-traded company. It has a small but growing range of long-range hydrogen semis which can travel up to 1200km before needing a refill. Of course, there’s not a lot of options to refill on the Nullarbor…