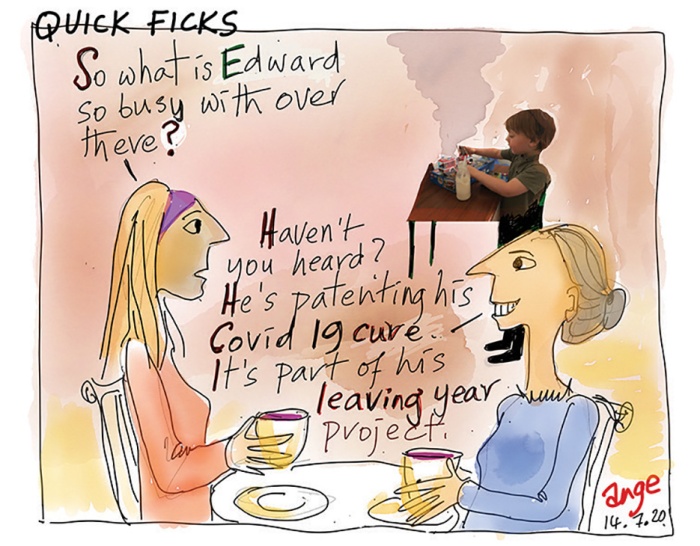 MY name is Isabel Rear and I am currently a student at Notre Dame University, Fremantle.

I am deeply concerned about the recent announcement by the federal government regarding the increase in university fees for commencing domestic students.

The federal government announced that fees for arts, humanities, social sciences and communications degrees will be increased by 113 per cent from $6,684 to $14,500, more than a degree in medical and dental science.

The proposal will also see a 28 per cent increase for students studying law, commerce, business and economics.

Cost should never be a barrier to accessing education or deciding what to study.

Students should not be funnelled into degrees that are deemed “job relevant”.

Universities are not job factories; they are places of learning and growth. It should not be up to the government to decide the future career pathways for students based on the fact that there are not enough jobs in these particular fields.

If you are passionate, hardworking, motivated and driven enough you will get a job

in whatever field you choose to study. It is up to us to decide not the government.

Students have been among those most impacted by the effects of

the Covid-19 pandemic and I feel deeply sorry for the 2020 leavers who have not only had to deal with the pandemic but now have the stress of possibly increased university fees.

Students should not have to shoulder the costs of this pandemic.

It is apparent that the government does not value the importance of humanities and arts degrees and this is hypocritical of the government given that a large number of politicians attained their first university degree free of charge.

The education minister, Dan Tehan is himself a graduate of an arts degree which helped lead to his political pathway. I would like a similar opportunity without huge financial constraints.

So how is it fair that we as students are not only having to now pay double the price for a degree but also shoulder the costs of Covid-19?

This has come after decades of funding cuts, deregulation and neoliberal policies. University education should be free and fully funded not doubled.

I AM 82 years of age and live in a beautiful street in Bicton, where I take great pride in my garden.

Recently, someone decided to help themselves to some of my prized possessions. They stole three large golden barrel cactus, valued at hundreds of dollars and two flamingo garden statues, given to me by a dear friend for my 80th birthday.

It happened during the night and must have been well planned.

I always try to see the best in people, but I hope Karma

has something in store for these inconsiderate thieves, who have deprived me of things which brought me such joy.

I beg to differ

I WRITE in response to the article “Port cold over compo” (Herald, July 11, 2020), which sought to link the then proposed long-term lease of the Fremantle Port to individual tenancy agreements at the Port.

The Fremantle Ports Authority is an independent trading enterprise that has its own Act, its own board and operates completely independent of government.

For what is claimed to have occurred, a ministerial directive would have been required – no such directive was provided under the previous government. There was no change in operating policy.

The claim that I stated to this paper that I intended to increase the port’s sale price through increases in lease charges at the port is false.

In fact, if the long-term lease

of Fremantle Port eventuated as planned, there would have been independent oversight of leasing at the Port to ensure the private operator did not exploit its monopoly position.

Obviously the Port was never leased out, there was no change in policy or governance, so I am unsure why this issue has not been resolved.

I do hope that a solution is identified that is financially acceptable to Mr and Mrs Robbins that will alleviate their stress; however I am unsure why the story sought to link their situation to the previous Government asset sales program.

Mike Nahan MLA
Member for Riverton
The Ed says: The story didn’t claim you ordered leases to be increased, only that you told the paper the port would be worked “harder” to make it more attractive (profitable) to potential buyers – which was true.

IN Marija Vujcic we have a councillor who is shining some much needed light on the state of finances and administration in the City of Fremantle.

the right processes to get good local government and governance.

As opposed to the politically affiliated, idealogical group think ratepayers have endured for a decade. Looks like mayoral material to me.

Slow it down in South Freo

DID you know that 55 per cent of pedestrians will be killed when hit by a car travelling at 50kmh?

That is the speed limit we in South Freo are stuck with since Main Roads rejected the City of Fremantle’s application for a 40kmh limit along South Terrace between Wray Avenue and Duoro Road.

Cut the speed by 10kmh and that fatality rate drops to 25 per cent.

Local demographics are changing (more families with young children) and the streetscape, at least along South Terrace is getting busy.

Council with community support and input started a process years ago – the key tangible output at this stage are multiple speed humps (planned to be removed contingent upon a 40kmh zone) – but also reduced traffic speeds along South Terrace (based on traffic speed data).

It seems whilst city staff were awaiting  road resurfacing along South Terrace to be completed before applying for a speed reduction, Main Roads (MRWA) changed their guidelines in the interim.

MRWA now won’t implement speed zone changes to single streets – but will consider whole precincts. So we have a great chance for a 40kmh zone between Marine Terrace and Hampton Road.

Even better we have a great template to follow.

Vincent council has recently started a 40kmh trial in a residential area where the streets are short and narrow – not unlike many in South Fremantle. Also earlier this year four regional towns, Balingup, Donnybrook, Boyanup and Bridgetown, commenced a 40kmh trial.

So we should be aiming to fast track a trial of a  40kmh zone.

If you support such an idea (and let’s make it a reality) please consider contacting your local Fremantle councillors (members@fremantle.wa.gov. au) as well as emailing Rita Saffioti, transport minister (Minister.Saffioti@ dpc.wa.gov.au) and our Fremantle MP – Simone McGurk (fremantle@mp.wa.gov. au).

Must surely be the catchword for our mayor and council, in thwarting the slalom roadsters on South Terrace.

Or is it ‘bring on the bikes’?

Now, not only are there speed humps, but even more obstacles.

Trouble is, a good number have been randomly plonked, eliminating verge access for prams and wheelchairs.

Couldn’t negotiate the obstacle course. Living in City Ward, I won’t test it.

Are these ridiculous additions, at a cost in excess of $200,000, an expensive slap-down to South Ward councillor Marija Vujcic, who campaigned against so many humps.

This is a wasteful project, at a time we await the completion of our Taj Mahal.

But there IS good news out there

It takes only a glance not even a stare On day one, two teenagers (on school holidays I presume) asked a man sitting on the footpath without being shy

He thanked them but declined

On day two, I had dropped my wallet while standing in a queue though I didn’t know The lady behind me told me so So good people if your’e not on the mailing list of The Good News Club

Fear not your’e not missing out

There IS good news out there, it’s just a matter of looking out