Whilst widely regarded that infill has its merits, the denuding of the suburb would appear to be a less frequently discussed consequence.

The choice of landowners to sub-divide is theirs to make and the financial gain equally theirs. But what’s the offset for the wider community??

Obviously something that requires moral, ethical and possibly legislative consideration.

Why is this pestilent tree continually planted when Perth has one of the largest asthmatic populations?

Why are our Indigenous peoples and environments insulted and assaulted this way?

No bird can nest in deciduous trees.

Danny B May [the MAY family]
Sebastian Cres, Coolbellup

WITH regard to your articles in last week’s Herald Vol 31, No 33 on page 10 “Brewery to kick off quay redevelopment”.

Just to be clear I support this redevelopment 100 per cent being a shop owner in the E-Shed.

I was surprised to say the least that E-Shed Markets did not even warrant a mention in any of the articles which were posted in your newspaper; personally I find that astonishing, with your building being not a stone throw away from the markets.

How could you NOT mention the already established Markets? Did your editor read his own work?

The last section is a real Kicker: “A longer-term plan would have to look at further opportunities for a commercial precinct around the train station.”

You have got to be kidding me.

‘Really’? Does the person that wrote this article live or work in Fremantle? Has he or she not ever walked on the wharf or been to the Markets? What the?

The fact is we are still coming out of the most challenging economic period since WWII – tourism is non-existent.

Fremantle NEEDS an injection and not have councillor Hannah Fitzhardinge’s short-sighted vision for Fremantle along with Dr Pettitt.

We have an opportunity here which should be grasped. We are all in this together, so the prime minister constantly says, and I agree.

So why is the Fremantle Herald not promoting its own city?

WE at the E-Shed Markets have been invisible for far too long.

We need help, we need people to visit, we need customers, we need parking facilities for the patrons of the market and not the City of Fremantle.

For once we need to talk to a federal representative at the markets. Our market is unique and in a unique location … we have many different shops and stalls.

Not located anywhere else in Fremantle/Perth if only someone would promote our terrific location and let the people of Western Australia know we are here.

Michael Delaney
AAA Army Surplus & Collectables
Shop 10/11  E- Shed Markets Victoria Wharf,
Fremantle
The Ed says: We hear your pain, Michael, but the article was about the changes coming to the quay and the city, not a business promotion (although clearly Gage Roads got some good mileage). We’re well aware of the E-Sheds, which was one of the few businesses to crack a mention in the Herald when the stalls re-opened back in June. But frankly, what the E-Shed has lacked for ages is a co-ordinated marketing plan. The fact that it took the shed’s “Kite Lady” to ring the Herald and basically beg for a story to announce the re-opening speaks volumes.

Where you gonna run to?

IN the heat and dry of this coming summer, people will pray to God for rain but God would say, ‘Hey folks, I’m giving it to you now in beautiful lots of showers, enough to refill your aquifers, which are nature’s water tanks. Why aren’t you making sure the rain is guided into the aquafers? Why do you let it just run out to river and sea, carrying with it the debris of the streets? Why? And why make everyone pay for water that will have to be wrested from the salty sea? Why are you letting this happen without demur?’ 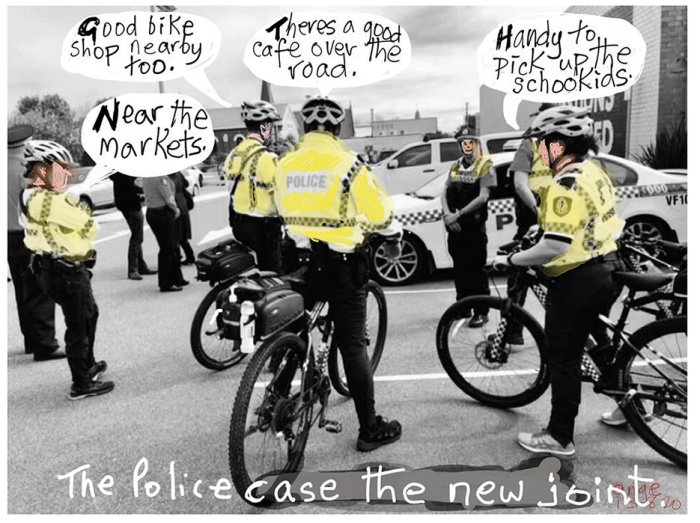 THE front page of the Herald a fortnight ago was a full page promoting four pollies (McGurk, Pettitt, Templeman, and Wilson), along with an expensive ad for Mr Wilson.

The pollies were hanging around the Round House, and for a moment I thought they were there for an official “Sorry” ceremony, to plead forgiveness for their joint neglect and damage to Arthur Head, the Round House, and Fremantle’s heritage in general (“Round House cash,” Herald, August 1, 2020).

But no, there was no apology at all, and no time spent in the stocks hidden behind them.

They were there because  $500K of Covid recovery money had been coughed up by Mr Templeman to go with the $500K Fremantle council borrowed from the same government, to atone for millions of dollars of neglect during mayor Pettitt’s reign.

Mr Templeman made it clear he isn’t interested in Captain Fremantle (for whom there is no memorial in Fremantle), or white history – in lockstep with Fremantle council’s move to spend $50,000 on a plan for a

Ms McGurk was there to remind the others how fast the WA government was selling off state heritage sites in Fremantle, like all the warders’ cottages, the former court house and police station complex, and the Technical School in South Terrace, while not having the money to properly repair their Spare Parts Puppet Theatre building in Pioneer Park, or apparently, to keep the old traffic bridge.

Mr Wilson has a history of upsetting J-Shed artists and others with his efforts to turn Arthur Head into an “arts hub”, and really he should have been at Fremantle Prison trying to help them get Federal funding for basic things like a heritage and an education officer.

Arthur Head will require millions of dollars to put back to where it was. Any works there need to be sensitively done to retain the original rock face, and the correct mortars very carefully applied to the Round House.

The Fremantle Society offered council a vision for the area, but council has no genuine passion for our heritage, and just wants someone to take Arthur Head off their hands.

Waiting for your next life

THE last Red CAT run departed from Fremantle at 6.15pm on Saturday August 15.

It was a sad farewell.

I have been catching the Red CAT bus service around Fremantle since its inception. It will be sadly missed by all of us who have had the benefit of using it.

Many drivers have come and gone over the years and it seems to have been more than just a job for most of them.

There has been some fun and laughter and enjoyment especially on the annual Radio Lolipop Day.

There have been occasions when a new driver who unfamiliar with the route has taken a wrong turn only to be corrected by the regulars.

The Red CAT bus drivers have often engaged as tourist guides in addition to their job description. Many have gone above and beyond.

We will miss them all but are looking forward to seeing them again on the Blue CAT as well as other services that we might use.

We are also hopeful that the council stays true to its word and eventually reinstates this valuable service once our beloved Red CAT has completed its well deserved nap.

The argument that Freo gets nothing because we’re a ‘safe seat’ is a lazy cliché.

Yes, we’re an important centre in the metro region, more can always be done, and I will always fight in government for the services and infrastructure we need.

But Freo is one of 59 seats, and while it might be the best, it’s not necessarily more deserving than others.

And yet the McGowan government is investing heavily in Fremantle.

We’ve brought almost 2,000 public servants into town to boost our economy, secured $230m towards a new traffic bridge, $52m for a modern, purpose- built police station, $35m for mental health, and millions more for local schools, roads and  homelessness services. In the last 12 months alone, $5.6m has been announced for Fremantle heritage assets.

The recent Westport report reflects the need to manage our future freight needs, to prevent our residential communities being choked with trucks and traffic.

I will continue to work towards creating a vibrant waterfront that brings jobs and visitors into Fremantle.

I do not treat Freo as a ‘safe seat’ and neither does the McGowan government. If the community supports us, it’s because we deliver for Freo and reflect its values in government.

I WRITE to express my concern at your rear page advertisement in your Volume 31, No 32 Edition of the Fremantle Herald of August 8, 2020.

In the first place, I wonder who it would be that paid for this “advert”, which is nothing short of an attempt to smear the president of a sovereign country, and is little more than smut.

The questions that beg to be asked are; 1. Has the Fremantle Herald stooped to smear campaigns to support its political point  of view? (I note there is no disclaimer.)

2. Has the Fremantle Herald stooped to lying in its advertising, by leading those who might support the opposite of what they believe, to the YouTube clip, thereby negating the possibility of a differing opinion to their own and upholding a balanced view?

3. Is the Fremantle Herald owned by the DNC or an affiliate of the Democratic party in America?

4. Has the Fremantle Herald stooped to the level of attempting to influence a foreign election, by behaving no differently than the Russian or Chinese interference in elections worldwide, recently highlighted by ongoing investigations in America?

5. Is the Fremantle Herald partly owned by a Russian, Chinese or other foreign entity?

6. If this is a Fremantle Herald sponsored Advert, then in the interests of fairness, would the Fremantle Herald be prepared to run a similar advert to a YouTube clip, with derogatory statements about say, Obama, Clinton or Biden?

7. Does the Fremantle Herald take the position that it will not allow any other viewpoint than its own, or its clients, Russian, Chinese, Democrat or whoever sponsored this ad?

I, for one, find this type of advertising offensive as I am sure many other of your readers do, although they might not be prepared to voice their opposition to this type of smut.

The founders of the original Fremantle Herald were the champions of the working class.

Possibly you should read articles from “Chips by a Sandalwood Cutter” that were aimed by this very newspaper, at the mentality of the social elite, to which either the editor, reporters or unvetted clients seem to subscribe by their actions with this advert.

Surely today they would have hung their heads in shame at what you have allowed their namesake to become?

If the Fremantle Herald seeks a political voice, why has it not concentrated its efforts on a full page advert around the plight of the poor in it’s own community, or corruption in local politics?

Instead I see they prefer to espouse the merits of Wuhan on page 21, the crux of so many of the world’s problems at present.

Though it may not be of any consequence to you, I will not make use of the Fremantle Herald again, be it either for personal or business use, and I will certainly not recommend any of your publications to anyone else.

David Creamer
Via email
The Ed says: It’s an advert. Free speech and all that, eh? The only affiliation the Chook has with the Democrats is a dusty old Women for Obama poster that someone brought in during his 2009 election campaign that’s still stuck up in a corner somewhere.