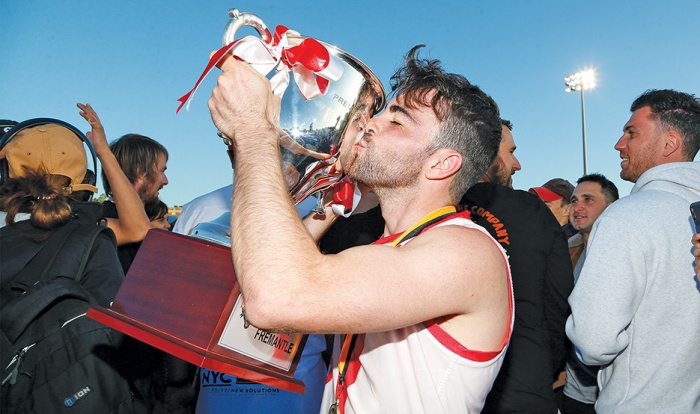 “The best since 2010” is what WAFL fans are saying about Sunday’s grand final, won in a thriller by South Fremantle.

The stars seemingly aligned for the Bulldogs and they were able to win their 14th premiership in their 120th season in front of a 10,179-strong home crowd.

It was a bright Sunday in Fremantle, a day that makes you thank God you’re a West Aussie.

The stage was set for a classic. South Fremantle against Claremont.

Redemption was the word ringing in the ears of doggie loyalists after being embarrassed by Subiaco in the 2019 grand final, and by Claremont in the second semi-final only two weeks prior. But those who love WA footy and South Fremantle knew a better performance was in line.

Claremont captain Kane Mitchell won the toss and kicked to the northern end with the assistance of a two-goal breeze.

Jye Bolton thrust himself into the game for the Tigers early, the first clearance one of many touches which saw him rewarded with the Simpson medal.

The tackle pressure was enormous, both sides desperate to get on the board first.

South Fremantle’s Zac Strom kicked the first goal in the early stages, the result of a downfield free-kick after a Mitchell ‘shirtfront’ on Ben Rioli.

Alec Waterman, Claremont’s most valuable forward, levelled things midway through the first term but the scoreboard attendant wasn’t troubled again before the siren.

South Fremantle lost prime ball winner Jake Florenca during the preliminary final, but was able to match Claremont’s talented midfield in the second term, though inaccuracy cost them.

Kicking with wind, they missed two early set shot goals but Brandon Donaldson was able to put the Bulldogs 7 points up with a right foot snap around his body.

Enter Waterman, the Claremont spearhead launching a booming 55-metre drop punt against the breeze – undoubtably the best kick of the day.

Zac Strom a proven aerialist, showcased his skilled taking contested marks and attempting a screamer, but the remainder of the quarter was again fruitless, both teams squandering opportunities to post a few points.

South Fremantle recaptured their form from last week and made their break at the beginning of the third term.

Against the breeze, a goal to Strom and a captain’s goal to Main had South Fremantle fans dreaming, but Claremont hit back through a pink-booted Callan England and Ben Edwards.

Controversy followed, with a goal to South Fremantle’s Jimmy Miller cruelly denied by an out-of-zone umpire.

The Tigers were building momentum, particularly after Bulldog Caleb Datson pinged a hamstring on the prison side wing, ending his day.

A third goal to Waterman put Claremont in front for the first time. Bolton with Waterman were instrumental in wresting control of the game, both threatening to deliver Claremont their first premiership since 2012. Heading into the final quarter Claremont 5.6 36 led a wasteful South Fremantle 4.10 34.

Playing a man down in the last quarter, South Freo had the assistance of the wind.

Tough, contested, high-pressure football made the opening 10 minutes a sizzler, though neither team could score.

Everyone knew it was coming down to the wire.

The Bulldogs were starting to tire while things were falling Claremont’s way.

An improvised soccer kick from Jack Lewsey led to a terrific contested Bolton mark and he picked out a leading Waterman with an inch-perfect pass.

A goal would extend Claremont’s lead to eight points with time running out in the shortened quarters of the 2020 season.

Waterman’s kick would miss to the right and only just register a behind, giving the ball back to South Fremantle.

Rioli kicked long down the eastern wing to Strom who marked easily. Wasting no time Strom kicked into the middle where a chaos ball was kicked along the ground, ending up in the hands of 100th gamer Mason Shaw.

Swiftly spinning around, Shaw threw the ball onto his right boot and sent it sailing through for six points, regaining the lead for the Bulldogs.

Now Bulldogs supporters were on their feet as the ball ping-ponged frenetically from one end to the other, bodies flying everywhere.

Strom, Higgins, and Miller started to take control of the skies with important marks all over the ground.

But for the Tigers, disaster; Mitchell couldn’t bear the agony in his shoulder any more and came from the ground grimacing in pain.

With five minutes left South Fremantle’s Jimmy Miller took an uncontested mark in the prison side pocket. The team’s inaccuracy all day had supporters’ hearts in their mouth, but Miller sent through a clutch goal right over the goal umpire’s head – akin to Dom Sheed’s goal in the 2018 AFL grand final.

Claremont’s Declan Hardisty kicked a quick reply to eliminate the Doggies’ two-goal safety net, and from the bounce down the ball sped into Claremont’s forward 50.

South Fremantle was under siege with less than two minutes to play and the Tigers just a straight kick from victory, but a Brock Higgins kick out of the backline made it to a congested centre square. It was utter chaos, with feet and arms everywhere, but somehow the ball emerged and sailed into South’s 50.

Claremont would get no other opportunity, with the siren sounding and South Fremantle victors in a pulsating grand final 6.10 46 to 6.7 43.

Fans streamed onto the ground to surround the players, while the team song “We are the Mighty Bulldogs” blared through the speakers.

It was a team effort from South Fremantle as opposed to Claremont, who relied on the heroics of Bolton and Waterman.

A champion team will always beat a team of champions.

Bolton’s Simpson medal was the third of his career.

Todd Curley, in his sixth year at the helm of South Fremantle, was awarded the John Todd medal as the winning coach.