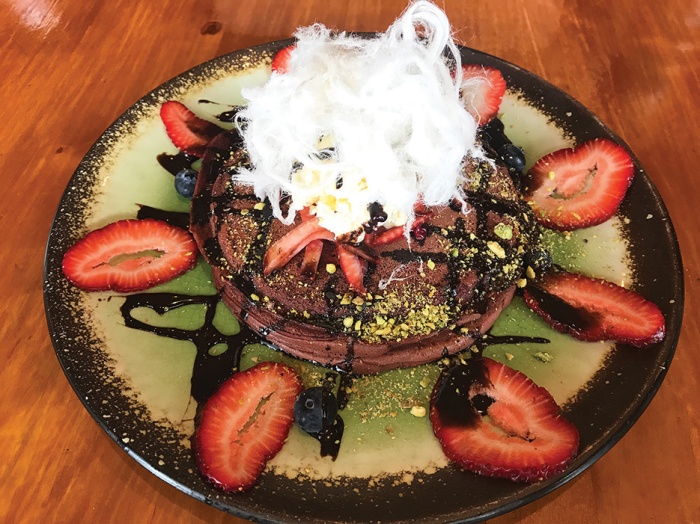 I’D been hearing good things about Kava Cafe, so my wife and I headed there for breakfast this week.

Nestled in the Bicton burbs, the cafe is just off Preston Point Road and part of a small row of unassuming shops.

When we arrived just after the school run, we had the whole place to ourselves and took a seat by the large bay window.

The decor was demure with darkish paint on the walls, wooden tables and leather bench seats.

There were some nice pendant lights and mirrors, but it felt a bit tired in places and a fresh coat of paint and some bright cushions wouldn’t go a miss.

The breakfast/brunch menu had an eclectic range of dishes including pancakes, mac and cheese, burgers, salads and a small range of brekkie dishes.

My wife kicked things off with a large piping-hot chai latte ($4.20) which came in a special rabbit cup with a ceramic tail and a saucer with a bunny drawing on it.

I don’t know if the cafe owners were big fans of Beatrix Potter, but it was a cute, original touch that made my wife smile.

As we waited for our food, the Bicton glitterati began to filter in with mums meeting for breakfast and sweaty couples arriving after their constitutional walk at the river.

It wasn’t long before the waitress was back with my cooked breakfast.

For $21 you get eggs on toast and a choice of four sides, with a maximum of two meat sides.

I went for poached eggs on ciabatta with avocado, mushroom, sausage and crispy bacon.

The eggs were cooked to perfection with just the right amount of runniness when you burst the yolk with the toasted ciabatta.

I wasn’t too keen on the sausage – it tasted slightly overcooked and was quite coarse and salty, but it may have been an Italian-style banger which generally has a tougher skin and richer filling.

Some people may have balked at getting just one snag, but it was enough for me.

The bacon was nice and crispy and went well with the egg and mushrooms, while the avocado tasted fresh with just the right firmness.

I wasn’t thrilled with the rectangular plate, which was actually too small to butter your toast on and move things about – at times it felt like a culinary version of Kerplunk.

Overall it was an enjoyable, but not outstanding cooked breakfast.

My wife’s eyes lit up when her beautifully presented red velvet pancakes arrived ($16).

She wasted no time getting tore into the chocolate pancakes which had a nutella filling and were topped with crumbled pistachio, house-made cream cheese and persian fairy floss.

“I thought it would be super rich, but it’s actually really well balanced and not sickly at all,” she said.

“The fresh strawberry helps to break things up and the cream cheese is delicious and a little touch of genius. It’s a really enjoyable and well-presented dish.”

I was busy drinking my watermelon and raspberry smoothie ($7.50), which was super cold and had a clean refreshing burst that revived my palate after the cooked breakfast.

The food at Kava was pretty good, but the whole dining experience could be enhanced with a few design touches to make it more cosy and inviting.

It does evening meals as well, so I’d like to go back and try some of those.