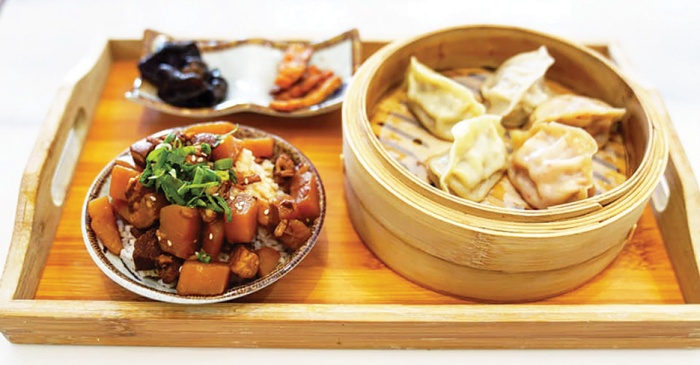 OVER the past few months there has been an explosion of eateries and pubs opening in Fremantle.

It’s surely a sign of a city on the up, so I decided to check out Lilly’s Dumpling House, the latest restaurant to open in the revamped Manning buildings on Market Street.

I’ve been craving freshly-made dumplings since my favourite stall at the Old Shanghai Markets closed a few years back, so Lilly’s is a welcome addition.

The small, casual eatery had a nice oriental feel with Chinese lanterns dangling from the ceiling, wooden artworks with dragons on the walls, and bamboo tables inset with Chinese watercolours.

It wasn’t forced or cheesy and created a pleasant atmosphere, as some dumpling and noodle houses can feel a bit utilitarian and fast-foody.

The menu was a two-page laminated affair with a small range of fried/steamed dumplings, rice and noodle dishes, and a couple of desserts. It was to the point with no airs and graces.

After ordering at the counter, it wasn’t long before the waitress was at our table with spring rolls ($7 for three), which were hotter than the face of the sun.

The rolls had a crispy deep-fried casing and a decent assortment of vegetables inside, but they didn’t really set the heather on fire.

The lady at the counter had said there would be a 10-15 minute wait for our steamed dumplings, so I passed the time by telling my young kids heart-warming tales about my upbringing in Glasgow – you know, knife crime, heart disease and glue bags (only kidding social services).

Thankfully the waitress soon intervened, setting down the pretty bamboo steamers on the table.

Plumes of steam rose from the freshly-made dumplings, which were folded in the pleated style.

The standout was the mixed vegetable ($12 for six) which had a lovely medley of flavours and tasted super fresh. No trace of anything frozen here.

Lilly’s had a prominent sign declaring their dishes had no added MSG, no artificial preservatives, no artificial stock, reduced salt and fat, and were made in-premises.

It was really evident in their veggie dumplings which were bursting with flavour and goodness.

The indulgent-sounding shark bay scallops and pork ($18 for five) had a strong fishy kick that complemented the well-seasoned, finely ground pork.

The casing was nice and light, and they were my wife’s favourite: “I like the combination of meat and seafood flavours; it’s a tad decadent.”

The kids’ favourite was the king prawn, mushroom and pork ($15 for five) which had had that classic flavour combo.

I was a bit disappointed as I was expecting the classic siu mai open-top dumplings, but they were all folded in the closed style, which made the meal a bit monotonous after a while.

However, they still had a lovely moreish flavour and didn’t taste fatty or greasy.

Lilly’s was busy on a Wednesday night with a steady stream of people eating-in and ordering takeaway.

The casual eatery is a welcome addition to Market Street, which is often dominated by the bigger restaurants on the Cappuccino Strip.

Lilly’s have good-value lunch deals and I think that would be the best way to experience their tasty dumplings.