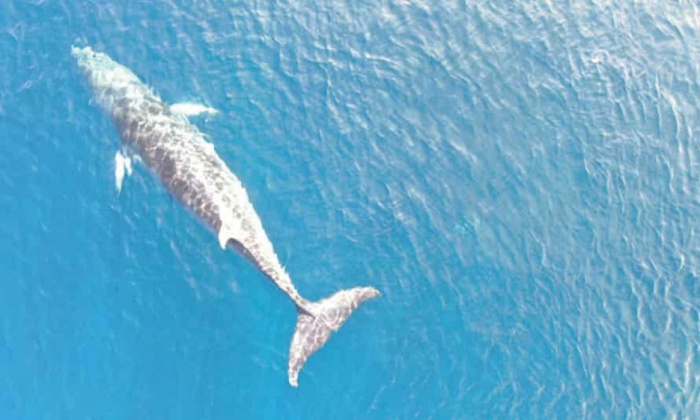 She has been following, with a growing feeling of despair, the sad story of a young minke whale caught in fishing nets near Taiji, the controversial Japanese village known globally for its dolphin slaughter. This is the first harrowing instalment.

AS time lapsed and the world was in the grip of Christmas, Covid and Trump, a poor helpless minke whale swam in circles, slowly starving to death, trapped by a wall of fishing nets.

As a member of Women of the World United against Taiji, I watched with distress and concern after advocates discovered the young whale had been trapped since December 24 in the fixed fishing nets off the small fishing village of Taiji off the north coast of Japan.

These are the dangers whales face on their migratory journeys, and many get tangled in fishing nets around the world. But while in most cases the public, media and agencies do their best to rescue these magnificent mammals, sadly that wasn’t the fate in Taiji.

I have compiled a diary of events capturing each day by brave activists Ren Yabuki and Kunito Seko of Life Investigation Agency and Dolphin Project.

Taiji is a fishing village in Higashimaro District, Wakayama Province, Japan, but with the fishermen on holidays, it was important to bring this incident to the attention of authorities.

Across social media channels the contact details of the International Affairs Division of Japanese Fisheries were also shared so like-minded people could voice their concerns formally.

December  27 – The Dolphin Project reported the whale was circling the inner perimeter of the net. Escape was futile. Ren Yabuki approached the net owners but was assaulted when a fishermen punched him in the nose, and another grabbed his camera. This is was reported this to the police.

December 29 – Life Investigation Agency and Dolphin Project members reporting on the situation are constantly watched by police, the coastguard and town officials.

January 1, 2021 -The story is picked up by The Independent newspaper in the UK, with drone footage showing the juvenile trying to break free and reports from marine specialists concerned it will die of exhaustion or starvation. There is no response from authorities. Fishermen are expected to return from holiday on the January 5, but it may be too late. Georgie Dolphin of the Humane Society International noted: “We implore the Japanese Fishing Agency to step in to release the whale.” Ren Yabuki reports the minke is swimming in tighter circles.

January 3&4 – LIA reports the whale is charging the nets. It has had no food or water since being trapped.

January 5&6 – The whale is now floating and has no energy to dive. The nets reach down to the seabed.

January 7 – Organisations around the globe have contacted Japanese authorities. Bycatch is illegal. The coast guard should have acted by now. Advocates are informed Greenpeace does not have a budget for whales – preposterous! The Guardian UK runs a hard-hitting article with animal rights groups asking for the release of the whale, but locals claim it is too difficult because of its size and strong currents.

January 8 – A protest at the Hague, Netherlands by Michella Harte. Two hammerhead sharks are also spotted trapped in the nets.

January 10 – Ocean vessels spotted approaching the nets. One vessel has a crane and hopes are high it will lift the net to release the minke, which was done for a humpback whale in November 2020.

January 11 – Ren Yabuki witnessed and reported the following: “At 6.30am the set nets were hauled up and the minke whale who we named Hope, was driven between the two boats with loads of fish. At 6.49am, the minke whale’s tail was tied with a rope and then tied to the edge of the ship and hung upside down. The head of the minke whale was sunken in the water for about 20 minutes. Minke seemed to be suffering and rampaged violently and the blood splattered around but the fishermen were laughing while working. Around 7.09am it drowned. While shooting with a drone, I witnessed the agony of the minke whale, and my hands were trembling with sadness. I lost my voice and felt as though my blood was boiling.” The vessel returned to shore with a large blue tarpaulin covering Hope.

One response to “All out of hope”