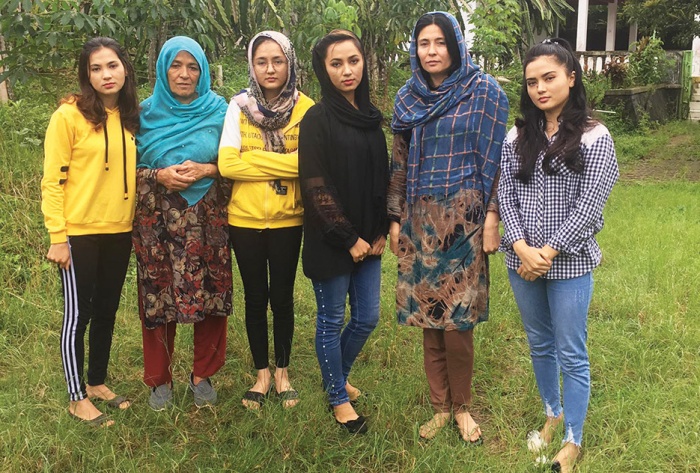 Zulaika and her daughters have escaped one horror situation after another, but still can’t find safety.

Former State MP and co-founder of CARAD – now Centre for Asylum seekers Refugees And Detainees – JUDYTH WATSON tells the harrowing story of a refugee family of six women stranded in dangerous circumstances in Indonesia and how a crowd-funding appeal aims to give them a new start in Canada.

BECAUSE of persistent attacks on Hazaras, Muhammad, Zulaika and their five daughters, aged between one and nine, fled Afghanistan 17 years ago to live in Quetta, Pakistan. But suicide bombers and target killings became a regular occurrence there and the father, Muhammad, was killed in one.

The family have escaped several of these attacks, and in 2015 escaped again to Indonesia after one of the daughters became targeted for simply appearing in a music video. Yet Zulaika and her daughters (now aged 17 to 26 years) are still to find the safety they need.

They have been assessed by the UN High Commissioner for Refugees to be refugees, but were told in 2018 that they would not be resettled and should resign themselves to a life in Indonesia, but with no rights to citizenship, work, education or health care.

It felt like the end of the road. The family has always lived with threats – because they are Hazara and because they are women. They continue to experience daily harassment, threats, stalking and even assaults. They have frequently moved and changed phone numbers in an effort to escape predatory men but the harassment continues.

The Australian Government refuses to accept refugees from Indonesia but a team of three Australian women with connections to the family have opened a crowd-funding campaign to raise money for them so they can apply to the Canadian Government under its private sponsorship scheme. This is their only way out.

The three of us first met in 2000 when Hazara Afghan refugees were released in Perth from detention centres on temporary protection visas. Lucy was working as a counsellor and I was a volunteer with the embryonic CARAD, each providing assistance to an Hazara widow with five children including Zubida.

Lucy went interstate to live but a series of coincidences re-connected us all with the family.

The widow in Perth told me years ago about her sister having to leave Afghanistan. This was Zulaikha. They were living in Pakistan when I heard of her husband’s murder. With legal advice, we applied unsuccessfully for the six to come to Australia under the humanitarian provisions.

Lucy is an academic in Sydney and has made many visits to Indonesia. She was impressed by refugees who had opened community-based schools to ensure that refugee children still got an education. Most of the volunteer teachers had a good level of English and a desire to help their community, but no training in teaching.

Lucy organised for colleagues from the teacher education department at her university to run twice-yearly teacher development programs.

In 2017 Lucy met Humaira, Zulaikha’s daughter, who was volunteering at one of the schools and attended several workshops bringing her intelligence, energy and humour with her.

Sometime later I contacted Lucy to ask if she could possibly find and visit the sister of the Perth Hazara widow we had first met in 2000. We knew she was in Indonesia but not doing well.

To our great surprise, Lucy found the family through Humaira. That 20-year connection enabled the family to trust Lucy and tell her of their terrible experiences.

As awful as the family’s history is, it is a common story for Hazara. What horrified Lucy the most was hearing of the daily sexual harassment and attacks in Indonesia. She advocated directly with the UNHCR without success.

“After working in this field for 25 years, I have heard many terrible stories, but this family, with their ongoing targeting and lack of any protection, embody the failure of the global refugee protection system,” Lucy says.

Across the world, women are the largest proportion of refugees. Lucy’s comment is an indictment of the failure of the refugee protection system at a time of huge need when recalcitrant countries that have followed Australia’s response to asylum seekers and refugees closed their borders, their hearts and their financial support.

The required sponsorship group of five has been found in Toronto for the Canadian scheme. The applications will be lodged when a minimum of $51,500 is raised to support the family during its first year in Canada.

It is a lot of money. Every dollar will go to the family’s living costs. The Canadian government doesn’t charge fees.

Please go to Chuffed.org, search for “Zulaikha” to read this family’s story and consider donating to help Zulaikha and her five daughters start a new and safe life in Canada.