1. Peter Vinci with his sons Michael and Glenn aboard Sandra V on Wednesday.

There is nothing more Freo than our Fishing Boat Harbour – and our local fishing families are at its heart.

Their stories are rich and colourful, their cultural heritage – mainly Italian – as deep as the Indian Ocean they’ve been blessed to fish since arriving over the course of a century to Fremantle – God’s country.

They established our first fishing jetty with a petition in 1912, and formed their own formidable governance structure The Fremantle Fishermen’s Co-operative in 1947.

It’s been a long hard road for most of Fremantle’s fishing families, and 2020 was a year like no other.

But the industry came together last year, like families do, and made a commitment to provide the Western Australian community with the freshest lobster from our pristine ocean through Back of Boat (BOB) lobster sales.

This Easter, those families would like to thank you and everyone across WA who has supported their small family-run businesses through the BOB initiative, and kept them afloat.

Enjoy a crayfish feast with your loved ones this Easter

If you eat fish on Good Friday – where else would you rather buy it than straight from the weathered hands of our local fishers?

BOB lobster sales mean our local commercial fishers have the opportunity to sell their catch directly to the public throughout the year, and over the next few weeks is as good a time as any as we prepare for the Easter break.

While BOB sale locations are advertised, our fishermen go out several times a week, and crays can be ordered directly from them anytime (see Facebook or email bob@westernrocklobster.org).

It’s Easter, and it’s interesting that third generation crayfisherman, Peter Vinci, was named after his late grandfather Pietro, who likely carried the name handed down over generations as a nod to Saint Peter, one of Jesus’s first disciples, a fisherman from Galilee. 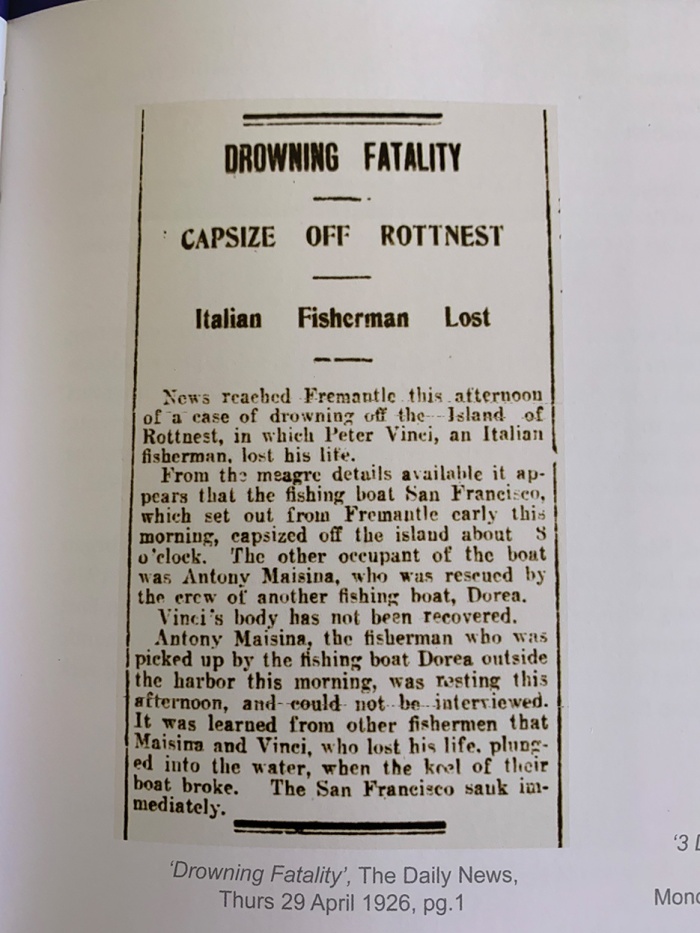 The 69-year-old’s paternal grandfather and namesake, started fishing here in the 1920s, but like many in those times, was tragically Lost at Sea (see photo of news article).

In 1926, his boat San Francisco, capsized off Rottnest and Pietro (RIP) was never seen again.

His son, Candido Vinci, Peter’s father, had been born in Sicily in the same year, but only arrived in Fremantle in 1949 to carry on his late fathers’ legacy.

After a short time Candido was “craying” with his uncle, Con, on the boat Fremantle.

In 1965 he and his cousin, Tony, went into partnership and eventually built the boat Marina.

“That was the year that I first went fishing,” Peter told the Herald.

“My maternal grandfather, Leonard Sgherza, was from Molfetta Italy, and was also a fisherman who began in the 1920s. All his sons had stints on his last boat which was the Venice. When my grandfather retired in 1971 my uncle Tony skippered the Venice and I started as a deckhand until 1977.”

In 1977, Peter and two friends, Fred Rodriguez and Zoran Car, invested in the boat Trapani.

“It wasn’t much of a boat, but it got us to Cervantes and back, and it survived Cyclone Alby,” says Peter.

Severe Tropical Cyclone Alby is regarded as one of the most devastating on WA record.

It almost flattened the iconic Busselton Jetty, destroying homes and crops from Perth to Albany, and worsening 92 ongoing brush fires that erupted into full-fledged wildfires that destroyed two towns and killed more than 10,000 sheep and 500 cattle and horses.

Five human fatalities are directly attributed to Alby while two more resulted from the fires.

“That was the first boat I skippered,” said Peter.

“Two years later we are all skippering our own boats. In 1979, with my dad and cousin, we bought a boat named Seavia too – a good sea boat that was built by the Sambrailo brothers.”

Peter’s sons Glenn and Michael fish with him on Sandra V. Just the three of them left now from many. He also credits his first wife Sandra (deceased, RIP), and second wife Rebecca (also deceased, RIP), and his other children David, Melissa and Annelise for his success.

“Glenn has all the qualifications to take over as soon I call it quits,” said Peter.

“I continue fishing because it keeps me active and when it’s good weather it’s great to be out there and it seems like a hobby not a job.”

The boys reported on Wednesday the waters off Perth were so calm and clear they could see their pots on the ocean floor – a rare sight.

Peter says Back of Boat sales (BOB) has been rewarding.

“I have enjoyed meeting all the customers and seeing them walk away very happy because it is the first time they could afford crays for Christmas. It has been good for the fishers but it has been very quiet since New Year.”

It’s Easter and whether we’re religious or not, tradition says that fish is the meal of choice on Good Friday although many don’t know why.

It stems back to Roman Catholic customs of old – not to eat the flesh of warm-blooded animals on Fridays to acknowledge and do penance for the death of Jesus who died for our sins.

Good Friday marks the day He was crucified – and we ‘unite our suffering’ with Him by eating fish.

Meat, in ancient cultures, was seen as a delicacy, something eaten during feasts, and therefore a worthy sacrifice and only slaughtered when there was something to celebrate.

Fish was seen as an ‘everyday thing’ especially as most people were fishermen.

The fish tradition is as much a part of Easter as chocolate eggs and the Easter bunny, only this tradition goes back much further.

On another note – Jesus was apparently a carpenter – but the image of Jesus as a fisherman is second only to that of Jesus as a shepherd – and there is no denying His first Apostles, Saints Peter and Andrew, were fishermen the “Fishers of Men” came upon casting a net into the Sea of Galilee.

Speaking of religion – for almost a century – our Fremantle fishing families have taken part in the pageantry and splendour of the Blessing of the Fleet – the annual procession from St Patrick’s Basilica to Fremantle Fishing Boat Harbour.

The Blessing is a tradition that began centuries ago in Mediterranean fishing communities to ensure a safe and bountiful fishing season.

First celebrated in WA by an Italian migrant fisherman, the historical port of Fremantle celebrates its 73rd anniversary of the Blessing this year to be held Sunday, 17 October.

Back of Boat Lobsters

Fremantle Fishing Boat Harbour (fuel jetty near 28 Mews Rd)
Thursday 25 March • Holy Thursday 1 April
Port Coogee Marina
Holy Thursday 1 April • Easter Saturday 3 April
Fishermen are taking pre-orders so give them a call or text to make sure you get yours.
Find out more about these special events, how to order, and other options to get fresh, local lobster anytime, from the Back of Boat Lobsters Facebook page facebook.com/BackofBoatLobsters or email bob@westernrocklobster.org

Promote your business. Contact Jane on 0417 814 128, or email jane.grljusich@fremantleherald.com