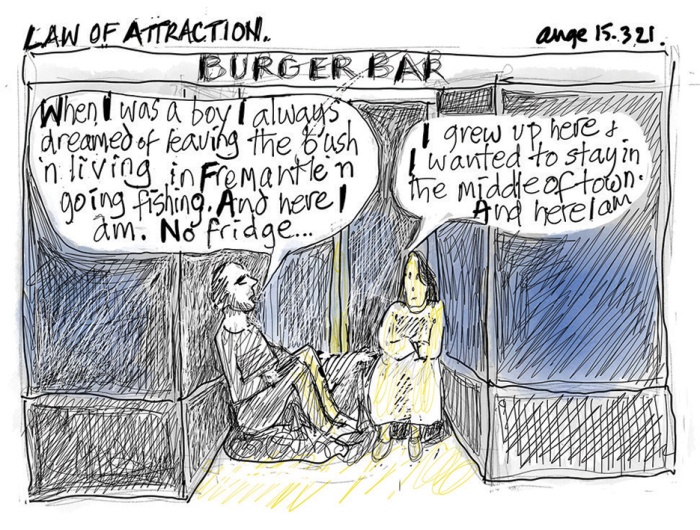 Mow between the lines

THE main bike path to Fremantle which runs beside the railway line south of Tydeman Road is relatively new.

It means we do not need to ride on the path beside the busy road by the Swan Hotel to get to the Traffic Bridge.

However, Fremantle council has been greening the bike path, not bothering to stop the grass lifting up the asphalt.

Indeed the maintenance staff have mowed the path to keep the grass short, because the council is not keeping the grass off the path.

It would be much better if the council kept the shared path free of the damage from the invading grass.

It has been nearly three years since the refugee Tamil family living in Biloela were rounded up in a dawn raid and sent to a detention centre in Melbourne.

There they languished for nearly 18 months, then were shipped to the Christmas Island detention centre.

Like so many refugees in limbo, their cases have been habitually and consistently discounted by the government.

But recently the full bench of the federal court upheld a 2020 ruling that the youngest daughter “was not given procedural fairness” in her application for a protection visa.

Mr Dutton has accused the family of “costing the Australian taxpayer millions of dollars”.

Yet it is the government detention, not the family, that is costing millions of dollars.

If the family were allowed back into the community, back to Biloela where they are welcome, respected and self-supporting there would be no cost, no interminable court cases, no more needless suffering for the family.

Tamils are being persecuted in Sri Lanka.

The Australian government could easily release themselves and the family from this agonising impasse by merely recognising that fact, thereby clearing the way for the Tamil family to be granted permanent protection visas and returned to their free, productive, normal lives in Biloela.

Or perhaps Minister Dutton could demonstrate a flicker of human decency, compassion and sensible thinking, and merely exercise his ministerial discretion to allow them to return to Biloela.

I REFER to the letter that appeared in your last edition entitled “Time to spend a penny or two…or more” (Letters, March 13) by Fay Kennedy.

I think that in her letter, Fay described the situation that exists in Fremantle at present, beautifully.

This matter has come to notice many times previously, with shopkeepers reporting that people were defecating and urinating outside the front of their businesses.

I for one have seen it first hand and it wasn’t a pretty sight. A few years ago I was having lunch at one the fine restaurants in the ‘Cappuccino Strip’ and I noticed a young man awaken from his sleep in the alley between this place and another restaurant.  He then proceeded to urinate on the window of this other premises.  I called a staff member over and asked her if this was a common occurrence.

She shook her head sadly and said ‘yes’.

She further advised me that he was one of the local ‘itinerants’ who was receiving treatment at Fremantle Hospital for a drug problem.

Now if make a comment and appear to be ‘judging’ this individual, I will have all the ‘bleeding hearts’ and ‘political correctness crusaders’ coming down on me like a ton of bricks.

So I will ask a question instead: Should this behaviour be considered to be normal and to be tolerated within society?  Something to think about.