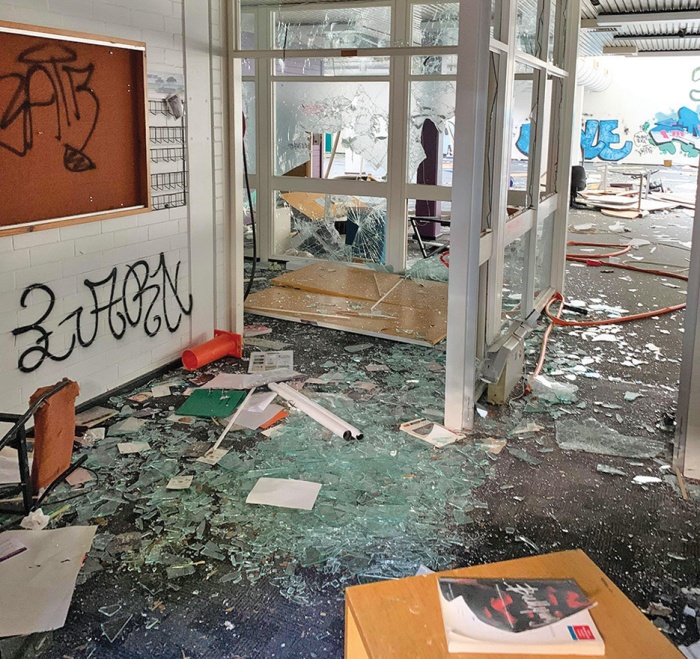 VANDALISED and abandoned, the old TAFE building in Beaconsfield has become a dangerous eyesore and should be demolished immediately, say locals.

Challenger TAFE once housed centres of technology, hospitality, tourism, commercial and business studies, but in 2017 classes were moved to the Murdoch Health and Knowledge Precinct and now the 1968-built structure stands empty and easily accessible. It’s front gates are wide open, giving pedestrians an eyeful of the rubbish-strewn and damaged interior.

Glass litters the floors, graffiti colours walls with gaping holes in them, and barely any windows are intact.

Local residents say they often see teens and young adults entering the building, with police frequently being called in.

One resident reported seeing a group of teens climbing onto the roof of one of the campus’s multi-story buildings, reviving memories of the 16-year-old boy who died after severing an artery in his leg while climbing on the roof of the South Lakes Shopping Centre in 2019 .

Another resident said there used to be all-day security, but now only a handful of security cameras remain in their place.

“It’s not serving any purpose, it was once full of students and providing a great training, that’s no longer the case. And really, it’s just acquiring more concrete cancer each day,” Mr Rafferty said.

“That area, Bruce Lee Oval, is such an important community resource, we really should be focusing on greening up that area and smartening it up.”

The buildings are scheduled for demolition under the Heart of Beaconsfield masterplan now officially adopted by the City of Fremantle, although they were added to the council’s heritage list in 2007 as level 3 which calls for them to be “maintained and enhanced”.

According to the Heart of Beaconsfield plan the site will be rezoned for “a mixture of new housing types from medium-rise apartments to low-scale family homes, as well as incorporating a strategic ‘green link’ and community facilities”.

Each day the old campus is “becoming more rundown” and more “out of sync” with the community says Mr Rafferty.

He supports the change proposed by the plan but says the city should pick the “low-hanging fruit” and “declare the demolition a priority”.

“I think it’s all about increasing the use of that area. And at the moment, the TAFE building is an impediment to that.”