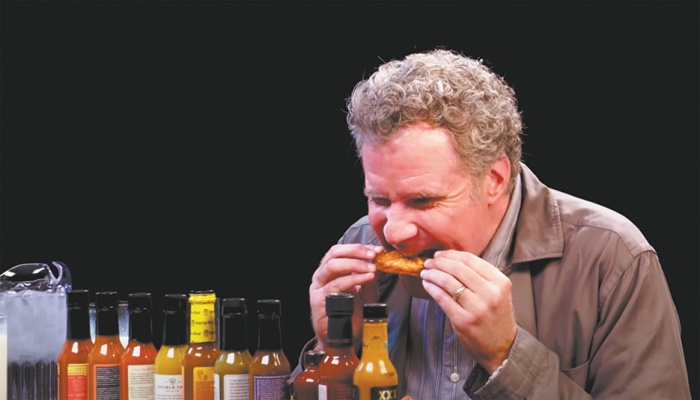 THERE’S a psycho on the loose in America, reducing A-list celebrities to tears.

Psycho features on the latest season of Hot Ones, where A-list celebrities are interviewed while eating 10 progressively hotter chicken wings doused in hand-crafted sauces from artisan producers around the world.

The Emmy-nominated YouTube show regularly attracts more than 10 millions viewers and Dingo is the only Australian sauce maker to feature on it twice, following their ‘Widow Maker’ sauce in 2020.

“‘The chilli itself is a twisted beast of a thing and its heat hits hard and fast – a punishing pod that takes no prisoners”.

Run by Nash and partner Ailbhe Travers, Dingo’s chillies are grown on Moore Veggies farm in Carnarvon, with the company’s HQ in North Fremantle.

Following their first appearance on Hot Ones, sales went through the roof and they had to quickly transition from being a cottage industry to manufacturing 20,000 bottles of hot sauce in six weeks.

Widow Maker was sampled by Will Ferrel, Margot Robbie, Zac Efron and Justin Timberlake, who described Nash as the ‘Willy Wonka of Hot Sauce’ and the Widow Maker its “everlasting gobstopper”.

Dingo went from strength-to-strength and just when they were on the verge of taking the business to the next level in North America, covid hit.

“‘All our export through 2020 completely stalled and we went from launching in the US with plans to continue growth to completely halting all export while the world essentially shut down,” Travers says.

“We were lucky to maintain strong online sales and continue our food business here in Perth through that period.”

Even with the world slowly getting back to normal and their second appearance on Hot Ones, Travers says operating in the post-covid landscape was tough.

“We initially thought ‘We’ve done this before, it will be easy’, but two years of covid have completely annihilated global supply chains – and this one was a long, long haul,” she says.

“The game has changed

in every way but despite the heat waves, floods, labour shortages, shipping crisis and lack of everything from vinegar to cardboard boxes we somehow, miraculously, incredulously got there in the end – 52 000 bottles of hot sauce, set sail from Freo and are now making their way to plates around the planet.”

Thankfully when the international borders were shut, Nash put his time to good use, creating Psycho.

“The punishment is provided by the bastardised bhutlah chilli pod growing on the Moore veggies farm in Carnarvon,” he says.

The new variety of chilli was discovered on the farm by accident, when Nash was in the region for the Gascoyne Food Festival in 2019.

To see how celebrities cope with Psycho, check out the new series of Hot Ones at youtube.com/c/FirstWeFeast.