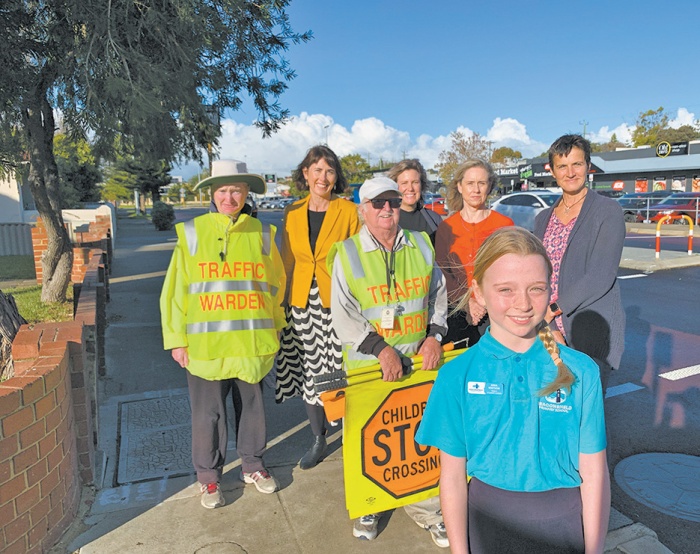 HAMPTON ROAD’S bus lane might get removed after yet another pedestrian was bowled over by a car near the South Fremantle Shopping Centre.

Beaconsfield Primary School year 4 student Ania Watson was walking to school with a friend last month and went to cross Hampton Road at the intersection of Scott Street.

It’s a crossing where Selby Adams has been ushering kids across every morning and afternoon since 2005.

“Selby actually stopped all the traffic, and I just didn’t see this one car in the bus lane that was coming towards me,” Ania said.

“So I kind of got hit on the head and then I tumbled onto the bonnet and fell down to the floor. And then I just crawled to the side of the road.”

Apart from Main Roads promising to look into the crossing, parents also wanted more crossing guards to be recruited, both for regulars and relief.

Straight after Ania’s accident, Leanne Martin was brought in to help guard the crossing with Mr Adams, but she acknowledges that’s now left a gap up near Christ the King Primary where she’s been posted for the last couple of years.

Mr Adams says he sees an average of one near miss a week at the crossing – and that’s only when he’s there.

“But this is the first bad accident that we’ve had,” he said.

He says having two guards makes a big difference.

“It’s much better; it’s much, much safer for yourself and also the children that are crossing as well.”

He says each shift they earn about $25 “which is not bad”.

“Crossing wardens significantly contribute to the road safety of our children and often become a beloved member of the community they work in,” Ms McGurk said.

Ms Fitzhardinge said “we are going to take a long, hard look at the bus lane”.

“We don’t think it’s necessarily serving a purpose other than creating risks on the road.”

Ms Fitzhardinge said the council might consider narrowing the road width and improving the cycling facilities, as currently riders have to share the outside lane with the buses.

“We are meeting with the PTA to discuss the future of the bus lane and seeing what other options we could put in place to create a safer road environment for all users.”