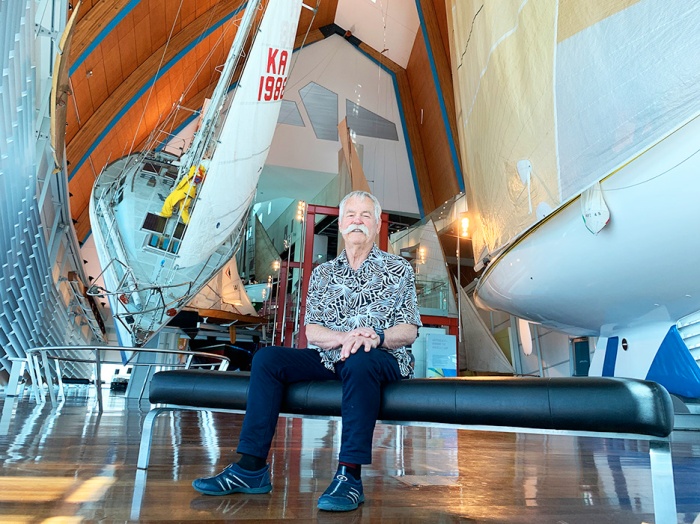 The WA Maritime Museum’s first director Graeme Henderson was back this week as it celebrates its 20th anniversary. Photo by Steve Grant.

THE derelict South Fremantle Power Station almost won the gig to become WA’s Maritime Museum back in the early noughties.

With the highly-lauded museum celebrating it 20th anniversary on Victoria Quay on December 1, inaugural director Graeme Henderson told the Herald he was initially drawn to the power station on CY O’Connor Beach.

Apart from its huge size, he said the site had something the quay couldn’t offer: “The ponds were the other aspect that we were really fond of too, because the idea was to have a little mooring area in close and we would have been able to have our historic boats fleet there,” Mr Henderson.

The fleet itself was something of a happy accident as the WA Museum came under pressure in the ‘80s to acquire a couple of old boats to complement the archaeological work being done by Mr Henderson and the team at the Shipwrecks Museum on Cliff Street.

“So we got a couple of old boats and before we knew it, we had members of the public ringing up just about every week saying ‘my boat is getting pretty old and I don’t want to take it to the rubbish dump, so it’s either you or the rubbish dump’,” Mr Henderson said.

“Before we knew it, we had a whopping great collection of about 35 boats.”

Many of them still languish in storage sheds, and Mr Henderson hopes that in future when the bulk of Fremantle port’s traffic moves on, a space in either the main harbour or Fishing Boat Harbour might be found for them.

Initially the museum moved the collection into B-Shed on the quay as the Historic Boats Museum.

But as public interest grew and Fremantle Ports groaned about having to give up valuable workspace, he started to look about for a solution.

It came when Richard Court ousted Barry McKinnon to become leader of the WA Opposition in 1992: “Him being a yachtie, he was our target,” Mr Henderson said.

Mr Court wasn’t just a yachtie, he sailed 18-footers which made him part of an exclusive and close-knit crew which just happened to include one of Mr Henderson’s recent appointments, David Pike.

“So David arranged for the three of us to have lunch at the Oyster Beds and I told him what my aspirations were.

“We wanted a building which would treat these boats in a good way and to make them available to the public in an exciting way, rather than just being stuck in storage.”

The future premier poured cold water on the power station plan; it was full of asbestos and too far from public transport, but he was an eager supporter and told them to focus on the quay, as it was the “entrance to WA” and with its former limestone bar a symbolic location.

When WA Inc swept Mr Court to office in 1993, the project was under full sail.

“We got the architects and they did what I think is a kind of, not over-the-top design, but a way out design that was really aspirational,” Mr Henderson says of the upturned-hull shape of the museum.

“If we’d had a little square shed down there, or even a big square shed, I think that would have been belittling that prominent spot.”

The state’s acquisition of Australia II also influenced the museum’s design, as it had to be tall enough to show off the America Cup winner from its radical winged keel to the sail carrying its unique and famous identifier; KA 6.

The yacht had been purchased by the National Maritime Museum from a bankrupted Alan Bond, a sale Mr Henderson strongly protested against.

When the new premier promised to bring it back, Mr Henderson was initially concerned he would commission a building suitable for Australia II and little else, but with a family well-attuned to legacies, Mr Court was unlikely to do a half-hearted attempt.

“We were always absolutely flabbergasted as to how big a project the whole thing was,” Mr Henderson said.

TO celebrate its 20th anniversary, the WA Maritime Museum is waiving its entry fees and extending its opening hours today (Saturday, December 10).

The celebration will also include a free outdoor concert and family-friendly summer party.

Acting CEO Diana Jones said it was a significant moment for staff and the Fremantle community.

“WA Maritime Museum has been at the heart of the Fremantle community since it opened in 2002 and has become a landmark on the city’s skyline,” Ms Jones said.

The museum was opened to a spectacular fly-past by Hawk 127 fighters from the Royal Australian Air Force, and provided six permanent exhibition galleries, a traveling exhibitions gallery, a function centre and theatre.