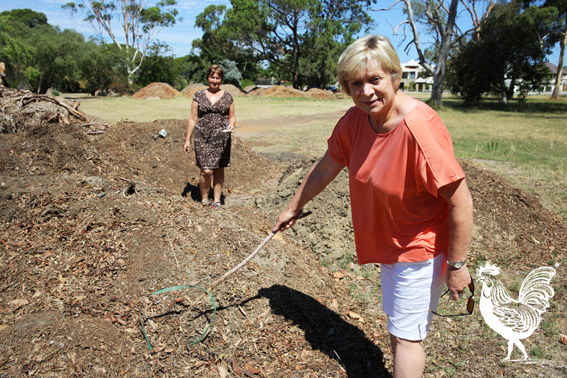 • Corinne O’Hehir and Janet Woollard amidst the garbage dumped on lower Heathcote.

More than a decade ago locals campaigned to save the site from subdivision, and they fear the land’s neglect since then is payback from a grumpy council, which had supported the development plans.

The land, which sits between the South of Perth yacht club and Heathcote in Applecross, is owned by the WA government but its management is vested with the council. Real estate in the area is amongst the most expensive in the country per square metre.

While the upper ridge of Heathcote has been magnificently transformed, the lower land sits unused, with weeds rampant and garbage piling up, and the council using it to store mounds of green waste and street sweepings.

Local Corinne O’Hehir discovered six piles there in the weeks before Christmas.

“If you look at how they’ve treated this oval over the past two years, it’s incredibly bad,” she says.

“The state of the lower oval… doesn’t look good for council.”

Local MP Janet Woollard says, “this is really just a slap in the face for local residents and the wider Alfred Cove community”.

“The local community worked hard for more than 10 years to save this parkland. We had to overcome strong pressure to develop the land for high-density luxury housing.

“I think it is shameful that the land is being used as a dumping ground.”

There are now talks underway between the council, the WA government and the National Trust to develop the site into public open space with gardens, a lake, and paths. The plan is supported by both Dr Woollard and her Liberal rival Dean Nalder.

Council acting CEO Marten Tieleman told the Herald, “at this time, the practice (dumping waste) has ceased”, but as of this week the piles were still there. He says, “on occasion road sweepings were temporarily located at the site before being removed”. He didn’t answer why the land was considered a suitable dumping ground in the first place.