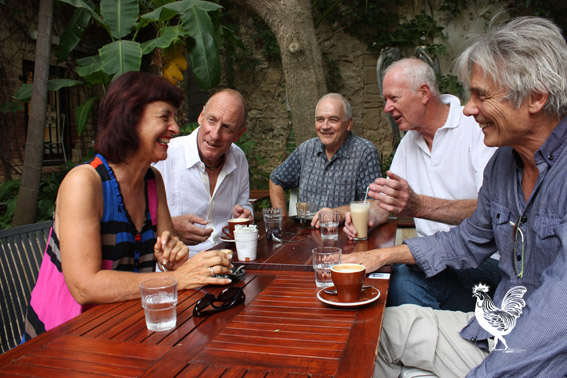 THIRTY Fremantle men and women, amongst them a former premier, have formed a new group to address the port city’s decline.

They will meet weekly at local cafes to brainstorm ideas on lifting Freo out of its economic and cultural doldrums.

Mr Longley says the genesis for G4F is regular but informal gatherings for coffee, where the baby boomers who dominate the membership gossip about “sex, drugs and rock ‘n’ roll” before inevitably turning conversation to Fremantle and where it’s heading.

High on the G4F agenda are:

• traders leaving the port in droves;

• the decline of the arts;

• the West End becoming a ghost town; and,

• the lack of linkage between the port city’s separate precincts.

Architect Sasha Ivanovich wants the group to help the council develop a long-term vision that doesn’t chop and change with every electoral cycle.

Professor Robison, who taught politics at Murdoch, says group members want to do something positive rather than just complain on the sidelines.

“We were frustrated with the lack of transparency with plans for Fremantle—what’s going on with those plans?

“Who is making them at local and state levels and in government departments?

“For example, what are the priorities of Main Roads? How do they see Fremantle compared to for example the port or Fremantle council?

“There is no overarching logic with consistency to the whole thing.

“So what we want to do is put pressure on governments at all levels to achieve some sort of cohesion and vision for what they are doing.”

“One of the things we’re thinking of was looking at Perth and Fremantle not in a local parochial sense, because in a sense cities compete on a global basis. Our competition isn’t between Dalkeith or Claremont, our competition is between Singapore or Hong Kong or Bangkok. So we have to deposit Fremantle and Perth as cities in that area that can compete and that can have a profile.”

He is critical of the council for allowing arts—once Fremantle’s great strength—to wither on the vine, and argues more work is needed to build it up again.

“Singapore had a big international art fair and it’s now becoming an important centre for creative and design arts,” he notes.

“Fremantle just can’t gets its act together. What would make artists and galleries come here, and what factors would enable them to come here?”

And there is sympathy for local traders paying high rents for heritage buildings that are not being properly conserved.

“We have this fabulous concentration of architecture yet there is no investment in it,” he says. “What is it that allows the owners of these public assets to not invest in them?

He says it’s an area the group could get stuck into with research and understanding.

Designs for Kings Square had raised eyebrows amongst G4F members but there was general acceptance of the need for more inner-city density.

“People in the group live in Fremantle because they like Fremantle—it is a special place.

“And everybody wants Fremantle to develop in an imaginative and creative way, but one thing we don’t want is mindless development to destroy that special character of the place.

“We don’t want someone to come in and build pre-fabricated boxes that become slums.”

He says G4F is not highly controlled nor bound by secret hand shakes. Members will contribute their expertise and experience to preserve the “special nature of Fremantle”.

Mr Longley says one of the strengths of the group is it’s opposing opinions. Members run the full gammet of those rapt with the current council to those peeved with its performance.

He wouldn’t say where he sat, but Anna George was more forthright; she says it’s almost impossible to get the council to embrace issues she sees as important, such as lighting trees along South Terrace. Where it did listen the results often weren’t up to scratch, such as the planter boxes along the Cappuccino Strip which she says are boring designs with the colour scheme out of order.

Over coffee with Kat Longley in South Fremantle, she described how the council’s policies on graffiti and the skate plaza on the Esplanade will attract young people, but not customers for local businesses. As a cashed-up boomer, she’s wanting to be wooed.

• PUBLIC investment vision, including government departments and projects similar to what’s happening in the Perth CBD;

• RAILWAY station precinct and its bus station redevelopment as an entry to the city;

• INTEGRATED approach to transport and traffic planning to address congestion and the division of the city;

• COLLABORATIVE approach to crime and anti-social behaviour and its roots;

• A STRATEGIC plan to revitalise and stem the ebb of retail and the arts and creative design; and,

• ACTION to address the lack of investment in properties by owners.