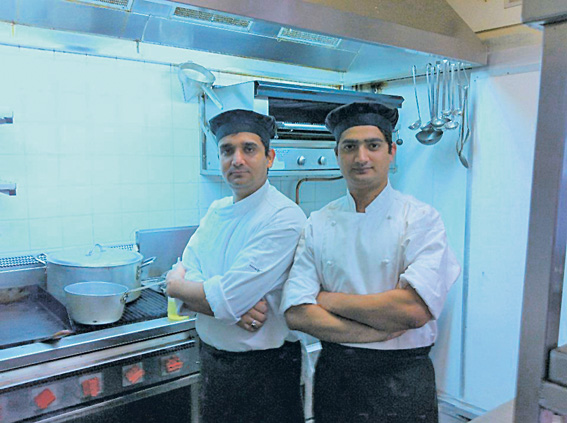 With only a soup under the belt from lunch and traffic snarls on the way to the airport to pick up grandad, there was no way I was going to make it back to Fremantle without a staging post.

Rossmoyne seemed a haven from the bogun belt out towards the airport so I tried my luck—and won—with a little suburban gem, Flames.

It’s a few blocks back from Canning River in a pretty unremarkable suburban shopping centre, but Flames ticked so many boxes we’ve considered making it our “local” and starting up a regular pilgrimage.

As always, one of our first questions was whether it’s kid-friendly, and considering kids’ meals are free on Tuesday nights, it’s a fair bet they are.

The service was exemplary. We were seated quickly and cheerfully, and menus and water soon appeared at the table. I’d barely handed my menu back to the waiter and our entrees were on the table.

Actually, rather than celebrating this fact, I was sceptical; surely they hadn’t had sufficient time to put any effort into our bruschetta ($4.90) or tomato soup ($9.90). But they had. The bruschetta was one of the best I’ve had in years, with warm, crisp toast topped with beautifully fresh tomatoes and not a hint of sloppiness anywhere. There was no attempt at some of these new-fangled upside-down bruschettas, it was just a good old-fashioned one done beautifully.

Soup’s never going to be a tough one to put out quickly, but still, this was a gorgeously simple tomato that came out steaming, creamy and delicious. Again, it was a traditional recipe done to perfection.

Flames’ next impressive manoeuvre was bringing out the kids meal early. Going to the airport had thrown dinner time out of whack, and I was just waiting for three-year-old to launch a hunger tantrum when it mercifully arrived. It was beautifully cooked fish and chips. The batter was crisp and light, the fish fresh and flaky and the chips crunchy, delicious and in a generous portion. Junior was soon hoeing in happily and quietly, and there was to be no sharing, thank you—except for the bit of greenery on the side.

By this stage I was wondering whether the chefs were trying to get home for a Masterchef final, as plate after plate kept streaming out of the kitchen and filling the table around us. The eclectic mix of work colleagues celebrating a birthday and family gatherings gave the place a great buzz without being raucous. Clearly there were no grumbles about their meals.

Then lickety-split our main meals arrived. Having been close to a hunger-faint during ordering, I’d gone for the scotch fillet ($30.90) which came with a salad and chips. My wife had gone for the same (she’s days from dropping a bundle, so sucking down iron took precedence over a bigger sample of the menu I’m afraid), while grandad opted for the grilled salmon ($29.90).

At least I’d gone for a medium-rare steak and my wife a medium, so we can report on the kitchen’s level of finesse. They scored perfectly on both counts. And then they got bonuses for the wonderful taste and texture of the meat. It was at this point I had one of those ‘slap yourself on the forehead and go D’Oh’ moments: flame-grilled—Flames restaurant. Geez, I wonder about myself sometimes.

Anyway, the beautifully tender meat had the most gorgeous, smoky flavour, complemented by a rich mushroom sauce. The salad was wonderfully fresh, with thin ribbons of carrot and beetroot, and a light dressing that didn’t overwhelm the veges or compete with the steak. Again the chips were done to perfection.

Grandad grills his own fish until it’s rubbery enough to repair a tyre puncture, so I take his verdict with a grain of salt, but visually it looked beautifully cooked and came with a golden saffron risotto and buttered broccoli.

For dessert the creme brulee ($6.90) was nice, but I felt it could have had a bit more oomph in the taste department, while the sticky date pudding ($8.90) was top-notch—not too thick and with a generous serve of the sweet, delicate butterscotch sauce.

With very competitive prices, astoundingly quick service, gorgeous food and attentive waiters, Flames is a fantastic stop-off if you’re on transit from the airport.

One response to “Flaming delicious”