THOMAS BOUSFIELD came to Western Australia in 1902, one of the thousands rushing to dig up their fortune in Kalgoorlie’s gold fields.

Fortunately for Bousfield, gold fever hadn’t fogged his brain enough to miss a business opportunity, and he decided there was more money to be made selling clothes to the prospectors than joining them on their harsh journey (many pushed wheelbarrows from Fremantle to Kalgoorlie).

So he set up Bousfields on High Street, where you’ll still find the shop going strong under the ownership of Freo local Bruce Haskell.

Mr Haskell bought the Bousfields out of the business in 1997 although the family still owns the building.

He says the store has survived because no one walks in to find oh-so-cool trendoids staring diffidently into space.

“You should treat customers the same way you treat visitors to your home — you wouldn’t leave a visitor standing around.

“We have people in here from age five to 90; a lot of the older customers are constantly reminiscing about how they shopped in Bousfields as children,” Mr Haskell said.

He also uses humour to good effect, with a liberal dose on show throughout the store.

As he stood at the entrance while showing the Chook around, three tourists stop to point and laugh at the grumpy quote on at a t-shirt in the window display. 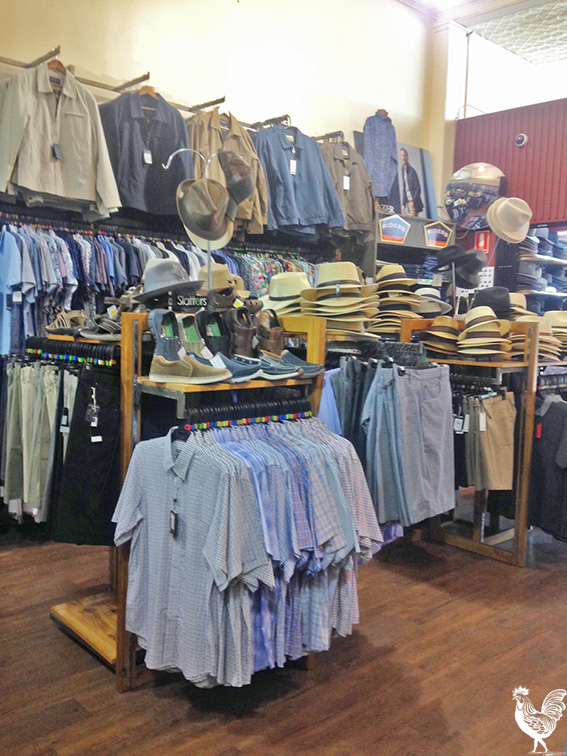 Mr Haskell joins in the conversation, asking the three who it was about. They all point at each other amidst more howls of laughter.

“We often get tourists in from all over the world that are returning after a previously successful visit,” Mr Haskell says.

“We also get customers from the Eastern States who say this is the only place they will shop.”

Regular shoppers come from Kalamunda right down to Dunsborough and Kalgoorlie.

“We have such a huge range and a lot of stock in all shapes and sizes, which appeals to a lot of people,” Mr Haskell said.

“Sunday should be about spending time with your family,” he says.

“I see Sunday trading as an obstacle that may split families.”

“Family first for sure — I have been the manager for all my son’s sports teams for the mere pleasure of helping kids that need guiding,” he said.

“Spending time with my wife and kids is my number one priority,” he Mr Haskell says.

“The highlight is that we are one of the only businesses not participating in Sunday trading, but we are still on the rise unlike a lot of other local businesses.”