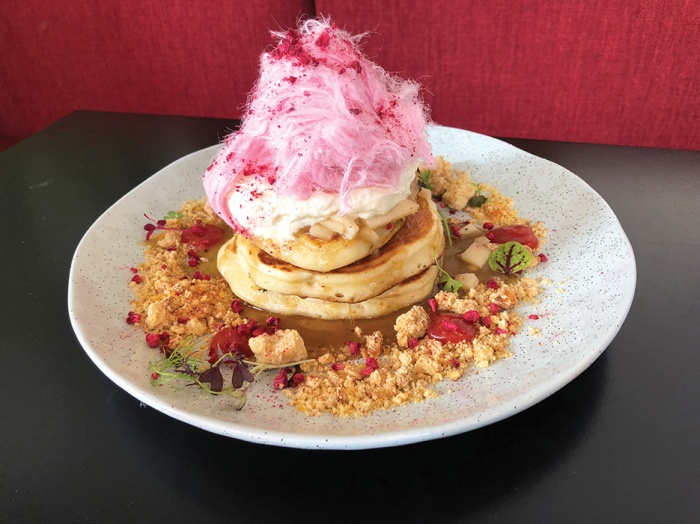 IT was one of those mornings when getting out of bed felt like a Russian novel.

As I walked out the Herald executive [sic] car park on Pakenham Street, I passed Cos Baby and glimpsed the young and beautiful toying with their designer breakfast.

I trudged to my desk and like some middle-aged budgie munched on a nut mix from Coles.

It was time for reparation, and on Friday my wife and I went for lunch at Cos.

Most of the dishes on the brunch-style menu have a contemporary twist – chilli scrambled eggs, pulled pork omelette, eggs with cannellini beans – and it’s clear the owners are striving to breathe new life into old classics.

The cafe is open to 4pm during the week so there was also some mains like slow-cooked beef brisket and chicken club with fried potatoes.

In keeping with hipster tradition, the menu had “humorous” titles for dishes and we ordered Are you a funghi? ($20) and Let’s get stacked! ($18).

I warmed up my palate with a Berry Nice ($9) – a vivid, bright-pink smoothie that reminded me of Liberace’s blouses.

A delightful mix of banana, greek yogurt, honey and mixed berries, the smoothie would have made “brother George” smile. Top notch and packed with flavour.

Unfortunately my wife’s chai latte ($4.5) was tepid, but the smiley waitress was quick to replace it with a nuclear-hot version that hit the spot.

Hailing from Britain I can be a bit phlegmatic, but my when my wife’s buttermilk pancakes arrived I was like Robin Williams on coke in the 80s.

This dish was a work of art; featuring candy-floss filigree and a moat of apple cider caramel and almond praline.

“The pancakes are heavenly and the cinnamon shortbread and vanilla yoghurt are a nice touch,” said my wife as the sugar zapped her brain.

My confit balsamic mushrooms looked the part too, and when I cut into the poached egg it satisfyingly oozed over the sauteed spinach.

The mushrooms were perfectly cooked and had a nice earthy punch.

The quality of ingredients at Cos are superb and the small touches like the whipped fetta and garlic oil in my dish elevated the tired old brekkie into the 21st century.

I just wished I had ordered an additional poached egg ($2) to make my meal an A+.

The cafe also has a nice display cabinet with wraps and sandwiches if you feel like something to go.

Cos is like Isla Fisher – small and beautiful – so check it out.