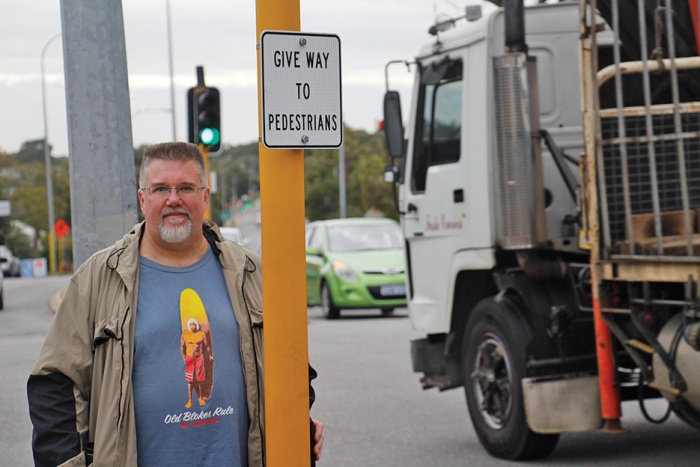 • Mark Woodcock says pedestrians are getting short shrift, and it could get worse. Photo by Steve Grant

A FORMER head of Fremantle’s ratepayers and residents association says pedestrians are getting short shrift in the city because of impatient drivers and poor planning.

Mark Woodcock contacted the Herald following our story on CBC’s campaign to get a second set of flashing lights on High Street (“A light catch-22,” Herald, June 22, 2019) to say he’d come across a brace of issues.

The latest was copping a serve from an impatient driver wanting to turn left onto East Street while he was crossing the road to take his son to John Curtin.

“She was yelling and waving her arms, telling us to get off the road,” Mr Woodcock said.

But he was just following the law.

Main Roads programs the flashing green man at many intersections to give pedestrians only enough time to cross half the road, alerting drivers to their presence but allowing traffic to keep flowing quickly by letting motorists continue as soon as the crossing’s clear.

That’s great if the pedestrian is leaving from the corner near the car, but if they’re coming from the other side of the street and have only reached the median, many drivers just barge through – risking a $300 fine.

Mr Woodcock points out a sign telling motorists to give way to pedestrians is tiny compared to others helping them to keep out of each other’s way, while the traffic act is ambiguous about whether motorists can creep forward when the light turns green or should wait behind the lights.

Another gripe is Fremantle council’s decision to reduce the median strip at the intersection of Wray Avenue and Hampton Road.

“They cut the median strip to put the bike lane in,”Mr Woodcock said, noting he sees more pedestrians use it than cyclists.

“There’s no refuge space for an elderly person or someone with a pram. If you are heading east you are straight into the traffic; peak hour is hell.”

“How bad will that intersection be when they start doing the High Street upgrade.

“They can’t have four lanes when they rebuild it, so how much traffic is going to be diverted onto other roads like Hampton for the months and months while that goes ahead.”