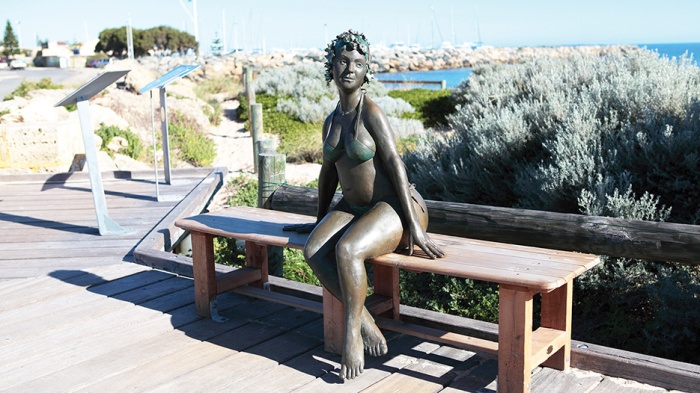 The statue’s creator Greg James reckons it would have taken a few blokes to lift up the 150-kilo public artwork, which has “sat” on a bench beside Bathers Beach since 2011.

“The department of transport rang to check I hadn’t moved her for maintenance,” he says.

Mr James is worried the statue could be sold for a few dollars for scrap metal, after several other public art statues were stolen in the metro area in the past 18 months.

But with Bella costing $100,000 to create, he’s hoping it was a prank and the culprits have sobered up and are wondering what to do with the life-sized, bikini-clad dame.

Fremantle artist and resident Mark Welsh says the theft is a sad sign of the times. “It brought to mind the guy who stole the painting from the National Hotel,” he says.

“It seems we are living in a culture where people want things for themselves rather than the greater whole. It makes me sad and then it makes me angry.”

Back in the port city for a visit, former South Fremantle resident Anne Roberts was “shocked” to hear about the robbery.

“She was the epitome of women everywhere; enjoying the sun sand and surf without a care about having to conform to shape and fashion,” she says.

“She represented freedom of expression and enjoyment.

“My grandchildren always loved sitting next to her and having a photo.