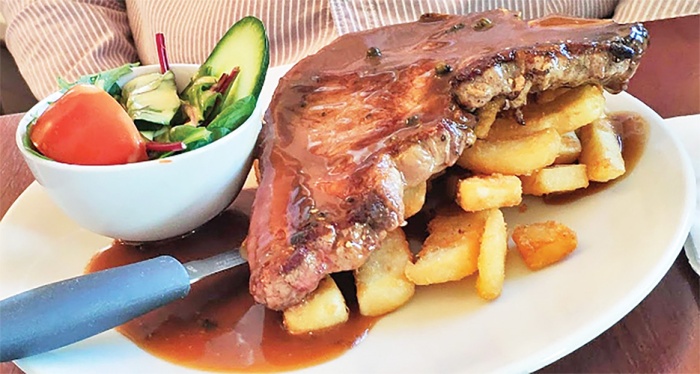 THE polenta chips I’ve had at different restaurants over the years have been so tasteless I vowed to never get them again.

But the ones on the menu at South Beach Hotel were made with pesto and goats cheese ($10), so we threw caution to the wind.

They were planks more than chips, but so tasty, light and delicious we couldn’t stop eating them.

The regular chips ($9) were also good, but the fat overload elicited groans long before our mains arrived.

An order of sesame-crusted haloumi and fig salad ($22) went some way to relieve the arteries, but not a lot.

The warm cubes of wonderfully chewy cheese had a crunchy coating.

The chef used vegetable stock and water from the portobello mushrooms to create a flavoursome broth for the dish.

“Along with the goats cheese it gave a certain zing to the taste buds and made the risotto moreish,” Dave said.

“This is the first risotto I’ve had that left me wanting more, even though it was a large serve.”

A few years ago the heritage-listed pub revamped its menu and converted its bottle shop to a semi-open dining area, and it’s been a hit with locals ever since.

Especially the $15 feature meals on weekdays. Steak night Tuesday is so popular you need to book, as is fish-and-chip Friday.

We were too full to even consider the dessert menu and waddled off home.