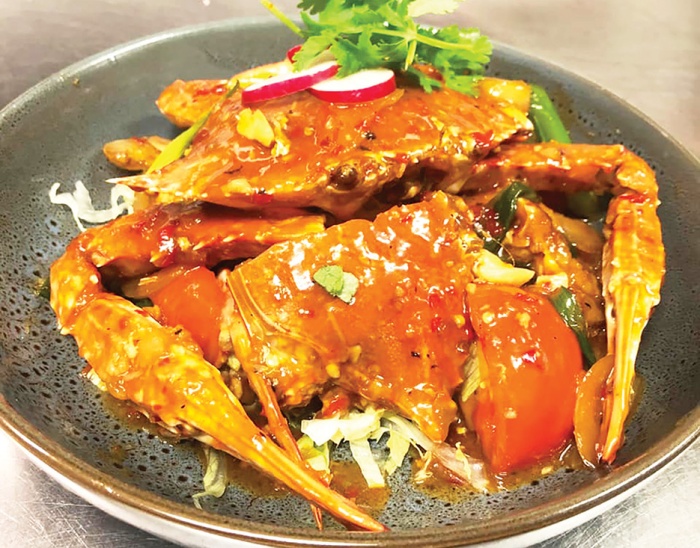 IT was one of those nights – my wife felt like Thai, I wanted Vietnamese and the kids asked if Pete Evans was from planet Doo-Doo.

After scouring Uber Eats, I discovered a Myaree eatery that would satisfy all our needs (apart from Evans’ cosmic origins).

Tao Cafe was the Swiss army knife of cuisine with seperate menus for Thai, Vietnamese and Japanese, including sushi and kids options.

Tao is part of a small chain of restaurants scattered across greater Perth, and while I’m not fan of chains, it had a nice range of dishes like pho tai, chirashi and seafood laksa.

We kicked off with a beef and a chicken teriyaki tao bao ($7.10 each).

They were tasty enough and the bun had that trademark soft chewiness, but there was too much spicy mayo and the thinly-sliced beef was a little fatty in places. To be honest, this entree never fares that well when home-delivered.

Over the years I’ve had wonton soups with two or three piddly dumplings padded out with cheap veg, but Tao’s soup had several large, golden dumplings bobbing on the surface and the bok choy had a nice crunch and tasted super fresh.

The pork inside the dumplings was good quality – not grisly or chewy – and the casing had that moreish soft texture.

Sometimes the broth in a wonton soup can be like an oily 20,000 Leagues Under the Sea, but this version was light and had the perfect salty-sour balance.

Rounding off this comforting dish were some crispy red onions and the obligatory scattering of coriander. A top wonton soup.

My wife’s face was turning scarlet as she devoured her Thai green curry ($24.10).

“The coconut sauce is lovely and thick and it’s got a good spicy kick,” she said, while reaching for her glass of milk.

“There’s plenty of chicken, and the red capsicum and green beans add depth. A solid curry.”

On the other side of the table my belligerent kids were gleefully dismembering a Barbie doll, but they were soon placated by the siam noodles with chicken ($23).

The slices of chook were slightly smoky, and the mixed vegetables and stir-fried noodles were fragrant and light.

A great chilli-free option for young kids or those adverse to spicy food.

Tao Cafe is a decent shout if you need a one-stop shop for pan-Asian cuisine.

The portions are huge and we had some leftovers for dinner the next night.