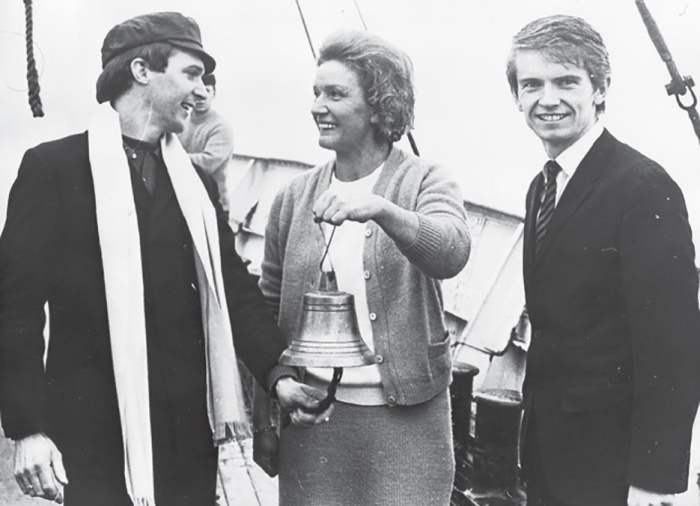 WA-born COLIN NICHOL, under his alternate name Colin Nicol, had a notable broadcasting career in Europe. He began as the only West Australian on Britain’s hugely famous and controversial radio stations on ships broadcasting from the turbulent North Sea.

THE death of “pirate radio king” Ronan O’Rahilly at 79 in Ireland, leaves many questions unanswered in the historic Radio Caroline saga.

As figurehead, he and with the adoration of others, cultivated an air of mystique about himself and about the origins of the famed first pirate radio ship off the coast of England. Much of that was untrue but millions bought it.

Establishing as “Caroline 199”, the ship burst upon the medium wave over much of the UK and great expanses of western Europe on Easter Saturday, 28 March 1964.

A former ferry, MV Caroline had only two broadcasters on board, neither with any experience at all, other than some tuition from me, a Dutch crew and technicians to service the generator and transmitter and keep the signal blasting up the 49-metre antenna that would change the world of music and media.

It was disappointing for me, as I was with the other radio ship operation preparing to go on air, actually the predecessor to Caroline and the original template for her and others to follow, but thwarted by piratical chicanery to be first on air.

I was scheduled to be the first pirate broadcaster on air with the breakfast programme on Radio Atlanta, which was the radio station copied by Caroline. In the end, it was the subsequently famous and later ignominiously failed Simon Dee who got there ahead of me.

Origin of the name Caroline, people behind the scenes, royal connections, dark associations, how the station was set up, where the money came from, stolen secret documents, sabotage, drownings, attempted injury, ship grounding, sinking, a killing, midnight boarding – there are secrets to be revealed and many stories to tell.

If this is already starting to sound convoluted, that is only the beginning of a saga that was as piratical behind the scenes as was its image as popularly portrayed in media across the world.

The launch of Caroline precipitated a world-wide media blitz only matched when we came on air shortly afterwards and then joined forces with Caroline.

As Radio Caroline South and North, we covered Britain and many surrounding countries, tens of millions. Our programmes even got to the Americas at times.

Pirate radio’s aim was to open up the music and record industry in the UK but also, importantly, to break the broadcasting monopoly of the BBC. Now as a result there are many radios stations there.

There was not much coverage of the story here at the time. After all, back then Perth was still a long way away from Europe. Pirate radio changed the world of music and media, was integral to a change in lifestyle.

Most recently, you may have seen or heard about a film called The Boat That Rocked, loosely based on our adventures. Very loosely.

The impact was more through the music that might never have been heard but for the ships; that and the associated fashions and mores that were the hallmarks of the era.

Pop groups popped up everywhere, Beatles and Rolling Stones just two of many, due to the pirates playing music that never had an outlet until then. The BBC controlled a rather stodgy monopoly at the time.

We are back in the Swinging Sixties with this story and pirate radio was the soundtrack to that exciting time.

It truly was all you have read and heard.

Only three of the original pirates are left.