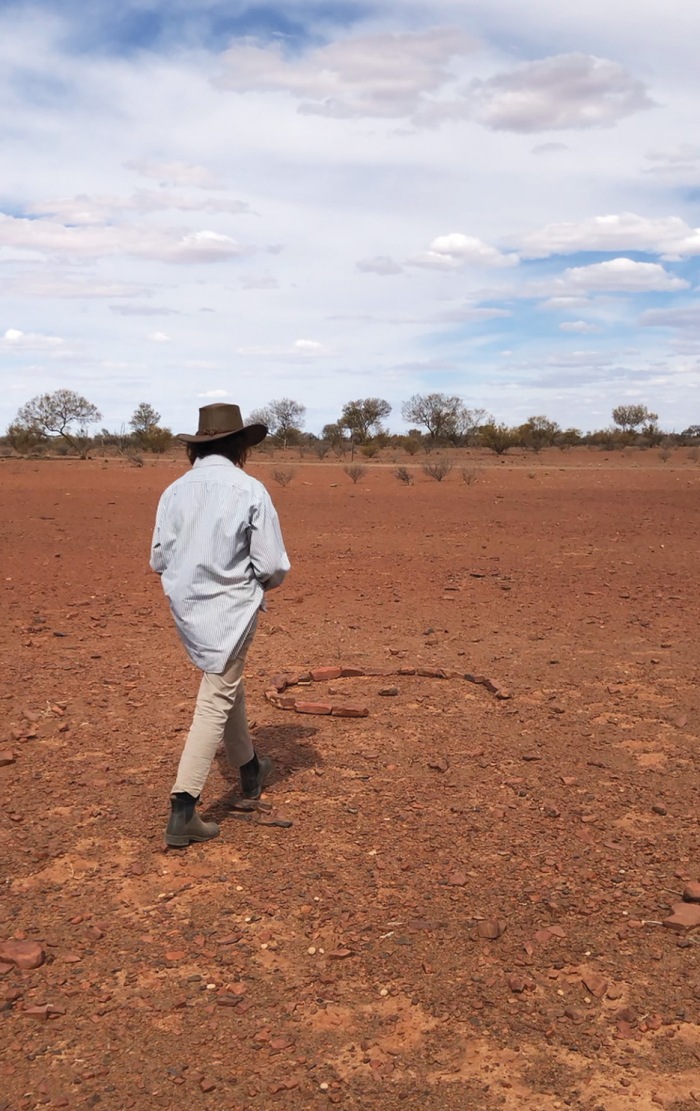 ARTIST Cim Sears was in her early 50s when she learned of her Aboriginal heritage and her ancestral connection to the western desert.

“There’s an enormous amount of stories that haven’t come to the surface about western desert Aboriginal communities,” Sears says.

Her latest exhibition draws on practice-led research exploring those connections, creating works and walking the land.

White records from the area are rare because of the remoteness, and many of the Aboriginal peoples’ own stories were erased or suppressed.

“The colonists wanted the land and wanted the minerals. They just wanted the Aboriginal people off the land, they weren’t going to celebrate anything cultural,” Sears says. “If you want people out of there you’ve got to spiritually and culturally and physically destroy them.”

Sears’ mother, a member of the stolen generation, did not know of her own heritage, and the artist says that added an extra layer of complexity to her 15-year exploration of her ancestry.

“I tried to protect my mum at the same time as being excited about these sorts of discoveries … it’s somebody else’s private story – my mother’s – so you feel like you have to honour that as well.”

Documents in archives filled in some of the pieces, but it was through “walking and making” that Sears felt a powerful connection.

As part of a Masters of Arts research project at ECU, Sears walked the region around Wongawol where she’s traced her connections, and made works inspired by the peoples’ ancient crafts.

“As soon as you take off from Wiluna, it’s incredible how the environment impacts on you as a human being.”

Sears says the feeling of connection to humans living a hunter gatherer lifestyle for thousands of years “is quite palpable when you get there”.

The “making” has been through other mediums rather than re-enacting the traditional processes. Photography, ceramics and painting set out to capture a connection to old practices.

Even working in a different medium – crafting ceramics into the shape of a bowl that would’ve once been made out of wood –  was an immersive practice.

“It becomes meditative. You start to feel that you’re becoming part of it.”

Discovering her own family’s history and walking ancestral lands has led to a rewriting of Sears’ personal history, and she hopes it contributes to the rewriting of WA’s history too.

“History and Aboriginal culture was non-existent when I went to school,” Sears says, and today many of the stories aren’t widely known, or only the white side is told.

For some western desert people, their first close contact with white people would have been when the WA government surveyor Alfred Canning plotted the Canning Stock Route from Wiluna to Halls Head in 1906.

He’s a celebrated explorer, but few know he only found waterholes by putting Aboriginal people in neck chains to force them to act as guides.

To the north-west, Aboriginal people, including those from the desert regions, were enslaved on pearling boats and as station hands.

WA’s 1905 Royal Commission on the Condition of the Natives makes that clear in a section on the “contracts” signed between authorities and businesses for the labour of Aboriginal people, who had no say in the outcome.

“Wages are not stipulated for in the contract, and it is only in about one case out of seven that they are alleged to be paid,” commissioner Walter Roth found.

But Cmmr Roth noted the vast majority of Aborigines didn’t even make it onto a contract and were forced to labour without documentation.

“According to the evidence brought before your commissioner, none of these natives throughout the North West receive wages,” he wrote in his report.

Commr Roth also discovered “at least 85” instances where children were “indentured” without permission of authorities. Scores more were on the books.

“At Broome quite one-half of the children, ranging from 10 years and upwards, are indentured to the pearling industry and taken out on to the boats,” he said.

Perhaps his most chilling observation: “With regard to the most suitable age at which a child can be indentured as laid down by law, the Chief Protector [of Aborigines] considers this to be about six years.”

Children received no education and no wages.

here for many years,” Sears says.

“There’s things that happened in Derby, the blackbirding, to go out and get slaves to work on the pearling boats. They were chained… They were shackled to bolts on the floor.

“We’re talking about slavery in WA, and most people would go, ‘what?!’

“It’s not acknowledged at all. You don’t hear people talking about it. That’s human nature.

It can’t face facts. Even within families, when something really bad happens, you go into shock.

“It’s a human trait. But I don’t think it harms us to actually unfold the stories.”

Walking to Wongawol is at Gallery25 at ECU Mt Lawley campus, Tuesday to Friday, June 9 to July 24.