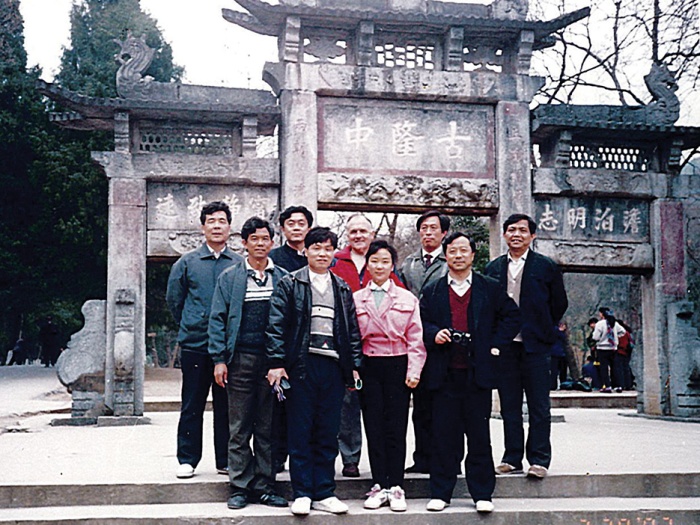 • George Neilson with some of his Chinese students.

GEORGE NEILSON is a senior teaching fellow at Curtin University’s business school with a speciality in management techniques. In today’s THINKING ALLOWED he gives a personal perspective of Wuhan, up until recently almost an almost unknown Chinese city – until it was identified as the breeding ground of the Covid-19 pandemic. Mr Neilson says WA’s got a strong connection to the city, which has a lot more to offer than just gloomy headlines.

IN the early 1900s and up to the 1930s China’s city of Wuhan was the international hub of American, British, French, German and Japanese enclaves – all representing their countries in international trade.

In Hankou, a district within the municipality of Wuhan, one can still see the large merchant buildings and trading houses of these busy trading times.

Today, Wuhan is known in China as the crossroads of nine provinces and is an important hub of commerce with a significant connection to WA – our iron ore which helps feed Wuhan’s iron and steel foundries, as well as our expertise which helped to make it the powerhouse it is today.

Up until a few months ago the city of Wuhan, in the central Hubei province of China, would have been little known in Australia.

Now, due to the outbreak of the coronavirus in this city, most people in Australia and around the world have heard the name, know of its existence in China, but know little else.

Wuhan today is a city of over 11 million people.

It straddles the famous Yangtze River and is the collective name for the cities of Hankow, Han Yang and Wuchang, and these three are considered a single political and economic unit.

Wuchang lies on the south bank of the Yangtze River with Hankow and Han Yang on the northern bank. The Han River separates Han Yang and Hankow and bridges and ferries provide transportation between all three cities.

One can travel west from the eastern seaside city of Shanghai by boat to Wuhan on the Yangtze River passing the old capital city of Nanjing; a pleasant two to three-day voyage.

The port of Wuhan is the furthest west boats and ocean-going vessels can navigate safely before reaching the internationally famous and majestic Three Gorges Dam of the upper Yangtze River.

In contrast to other Chinese cities like Shanghai, Xian, Beijing and Hangzhou, each of which has its own particular attractions – Shanghai for example has its Bund, Peace Hotel and harbour; Xian for its internationally famous terracotta warriors; Beijing for its Emperor’s Palace and Tiananmen Square and Hangzhou for its lakes and gardens.

Wuhan is the industrial city in mid China famed for its age and history.

It was in Wuhan that the Chinese Revolution was born and which overthrew the 4000 year Chinese dynasty in 1911.

Not only does Hubei Province and Wuhan in particular have a long and respected tradition in iron and steel making, but also the region is one of the most dynamic industrial and agricultural regions within China.

Wuhan is known in China as “the crossroads of nine provinces” because of its central mid-China communications, railways and highways and because of its huge iron and steel mill second only to  Beijing in the north.

Former Australian prime minister Bob Hawke led a delegation to China in the late 1980s and this resulted in joint Chinese/Australian cooperation for several projects. One of these particularly pressing projects was the iron and steel industry.

There was a crying need to improve the production, quality and management of China’s iron and steel production.

The quality fo steel being sold to countries like North Korea, Vietnam, Laos, Myanmar and Mongolia was well below world standards and to be competitive, urgent attention and positive action was required.

In the late 1990s I was approached by a semi-statutory corporation, the Overseas Projects Corporation, along with seven other colleagues from different Australian tertiary institutions, to participate in a two-year enterprise management project with Wuhan Iron and Steel Corporation.

Initially in Melbourne for six months, we sat down with our Chinese counterparts and wrote the course subjects that we were to teach in China.

For example; organisational behaviour and international business were my areas, financial management and strategic management were someone else’s, accounting and finance, etc.

On arriving in China the two-year training project was officially opened by the then Australian minister for foreign affairs Neil Blewitt, attended by several high ranking ministers from China’s Ministry of Mines and Metallurgical Industries.

A special training centre was opened at Wuhan’s Geoscience’s University and over the two years, nine management training courses, each of 10-weeks duration, were taught.

Three hundred and twenty middle and senior managers seeking western management theories and practices attended and successfully graduated. We also ran the courses in other provinces.

We visited Sichuan province and the mines at Pansewah; we saw Hunan, Shinzo and Beijing and conducted the courses in Shanghai.

Advice and counselling senior executives in state and private mining and steel companies at the request of China’s ministry were also conducted, highly appreciated and gratefully acknowledged.

At the conclusion of the project, the centre director Shen Shide wrote to us all saying: “… you will be part of the history of the university” and we gratefully acknowledged that. While Wuhan would not vie for the title of most attractive city in China, the mountains and lakes that surround it are quite spectacular.

The meaning of Hubei in English means North Lake and it is also known as “The Fertile Province” because it is surrounded by agriculture, rice production, pig, duck, aquaculture, fish farming and chicken breeding.

In fact, almost 10 per cent of China is fed by Hubei Province. Parts of the province adjacent to the city of Wuhan include rest houses and small hotel nestled in the mountains, favourite spring and summer resorts – rather like the Swiss Alps in many places, Wuhan has a lot to offer and welcomes tourists, foreign visitors and locals.

The city has is own beautiful East Lake, more than 20 educational institutions including four internationally-renowned universities. The people of Wuhan are proud of Hubei and their province and devastated by the tragedies of the coronavirus and it is hoped they will receive visitors and friends in the future.