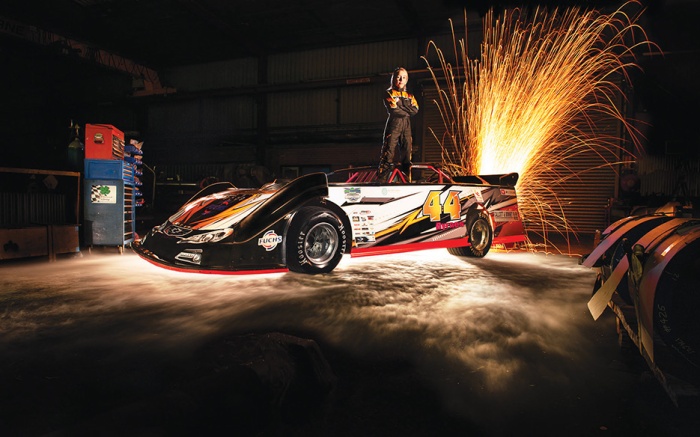 BACKSEAT drivers aren’t a problem for Laura Byrne; her car doesn’t have any back seats.

Heading into her first full season and hoping to turn her passion into a career in the United States, Burne isn’t your average racing car driver. She stands just 4 foot 11 and got hooked on motorsport watching races at the Kalgoorlie Speedway near her childhood home.

“One day they announced on the PA that you only had to be 10 to race. After that I was really keen, I kept asking my parents, and was pretty relentless. I ended up getting my first car at 11.”

It’s not a sport for the faint of heart. According to Late-Model Racing Australia, “a Late Model spends most of its time scrabbling for traction, broad-sliding around the corners, wheel-standing on the straights, and throwing clay into the stands, while the driver wrestles frantically with the steering wheel.”

Byrne’s testament to its difficulties; she’s rolled her car five times already. Once, she sustained optic nerve damage in one eye, leaving to her needing glasses. The crash kept her off the tracks for ten months, but the adrenaline rush proved too addictive.

Racing is for everyone, insists Byrne.

“It doesn’t matter about my size, or my gender, or my background; once I’m in that massive car, I’m as much of a competitor as anybody else,” she told the Herald.

Most people share this opinion, she says, but not everyone is accepting: “Sometimes, I’ll be doing work on my car at a race, and people will stop, and stare. Some will even take photos. It’s like – can’t a girl work on her car?”

Recently, she asked a fellow mechanic if he would like some help. He flatly said “no” and started laughing.

She also knows her stuff; dad was a mechanic and from a young age she could wield a tortion bar with more alacrity than a Barbie.

“My motto is – stay fearless,” she says.