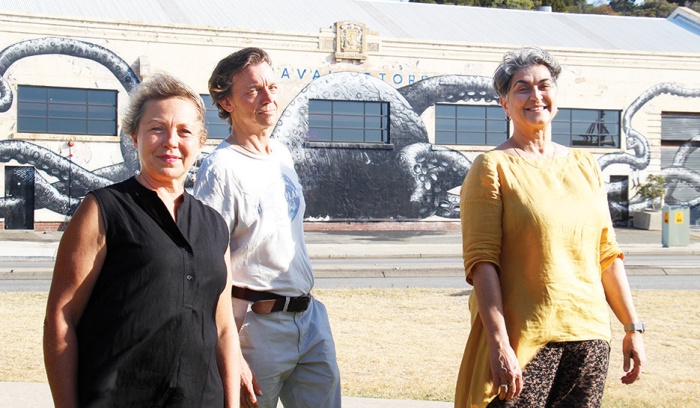 Artists Tineke Van der Eecken, Adam Bennett and Viv Glance from BRINK festival. One of its venues will be the old bond store in Freo.

INFURIATED by polluters who “artwash” huge profits through festival sponsorship, but gag participating artists from speaking out about climate change, a Fremantle collective has created their own ethical festival.

BRINK will be held in a variety of locations through Fremantle over the weekend starting Friday March 26  and has the support of Freo council.

Mr Bennett said he’d planned to put a shows into Fringe this year, but after hearing it had tightened performers’ contracts to prevent them upsetting “festival partnerships” it was the last straw.

He says one of his daughters, an emerging artist, was given a ticking off by her own company when she raised her concerns about climate change.

“Artists have this fear of speaking out about what they believe in,” he said.

Ms Van der Eecken said she’d previously held one of her poetry events under the Fringe banner, but it hadn’t panned out as successfully as hoped.

“Fringe is an amazing and a wonderful opportunity, but it’s something that after a while you start to question why you are doing it and whether this aligns with your values.”

Ms Glance said despite some improvements made by Fringe over the years about how artists were paid and treated, the low pay rate didn’t make it worthwhile selling out your soul to appease companies with executives on six-figure salaries.

“We’re doing it in Fremantle because we are trying to get new organisation to come to us with sponsorship; organisations that don’t sell fossil fuels but are into things like recycling or renewables.”

BRINK already has some acts locked in, including four performances by Jennifer and Horst Kornberger which invite the audience to become part of “social sculptures”, the Empty Sky Cosmic Cabaret with Freo legend Kavisha Mazzella, Indigenous performer Richard Walley’s Six Seasons with Junkadelic and an eco poetry night with Natalie D-Napoleon at the Navy Club.

To keep up or sign up as an ethical sponsor, head to brink.org. au or find them on Facebook.

We asked Fringe for a comment but didn’t hear back.