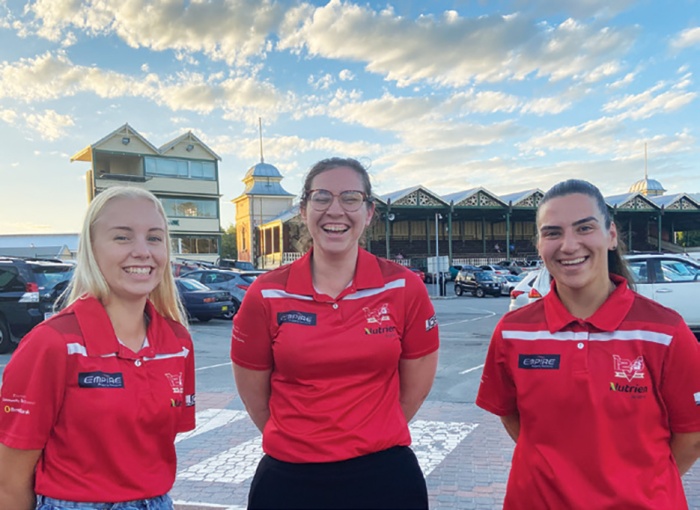 On Monday, more than 150 people, packed the South Fremantle Football Club (SFFC) rooms at the historic Fremantle Oval to celebrate the launch of the 2021 women’s football season.

Women at SFFC play at three levels – Seniors (entering their second season in the official WA Football League Womens competition), Reserves, and Youth Girls (with many of last year’s Premiership players moving up to the WAFLW squad this year).

Club legend, Games Record Holder, and Manager of Football, Marty Atkins, is looking forward to the start of the WAFLW season tomorrow.

“SFFC is the premier family club and provides an opportunity for anyone, male or female, no matter what part of life’s journey they’re on, to come together to follow their passion for football,” he told The Herald.

And that shows in the diversity of the players including Melissa Silcock, a single working mum of four who’s also studying nursing; Taylah Cruttenden, WA’s fastest and the nation’s fifth-fastest under 20s 100m sprinter; Poppy Stockwell, in Hobart to represent WA in the national one day women’s cricket competition; and the Kowald sisters, Georgia, Sheridan and Miikaila, who travel from Katanning to play for the club.

And there’s some familiar names joining the ranks this year – Zoe Worsfold, daughter of 1997 Premiership Captain Peter; Cian Parsons, daughter of 2002 Fairest and Best Zane; alongside Indy Strom who played in last year’s Rogers Cup Premiership side, who is the sister of Mim, current Fremantle Dockers Womens ruckwoman (all are-sisters of 2020 Premiership Players Noah and Zac).

Get down to Freo Oval from 9.20am Sunday to support them and throughout season 2021.

The players would like to thank the women in leadership at SFFC including Board Directors Liz Houston and Hayley Manser (and although he’s a bloke – Director Bruce Willis also rates a mention here), and operations team leaders Kelly Chalmers, Rochelle Whitelaw and Malira Cocking, as well as their loyal sponsors Acton Fremantle, Tailored Resources, St John Of God Murdoch, Pharmacy 777, and  The Gate Bar and Bistro, and Armando Sports for making this article possible.