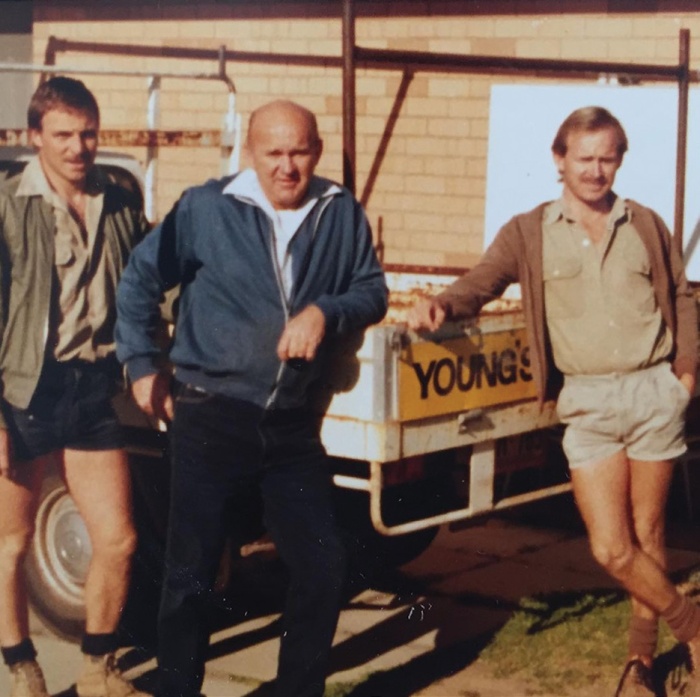 Tony with his Dad Jack.

The nicest plumber in Fremantle turned 61 this week (Happy Birthday, Tony) and it suddenly dawned on him he’d clocked up another milestone – for 40 years he’s worked for the same boss (himself), same company (his own), and he still has many of the same customers.

“In a time when many people change jobs, and sometimes industries, every few years, I realised I have spent 40 years making water run out of taps, fall 150 mm, and run away down the plug hole – perpetual motion, a little like my career,” Tony told the Herald.

His mother and father, Robin and Jack Young, started Youngs Plumbing in 1976 from the back patio of their Fifth Avenue home in Beaconsfield, and the company has been busy ever since.

“I grew up in Beaconsfield opposite Davis Park, a rough and tumble State Housing enclave of weatherboard post-war housing. I attended Beaconsfield Primary and South Fremantle High School where I was the token Aussie. My father said that he named me Tony so that I’d fit right in,” Tony says.

“A year of Arts at UWA, literature, economics, psychology and anthropology confirmed that I was probably destined to be a plumber. A benevolent Aunt in Sydney off ered me a lifeline – ‘before your father asks for the uni fees back’ – and I had a couple of years working and travelling before I found myself home again – broke and in love with a girl from Sydney.

“Jack asked me to ‘give us a hand to fix some cyclone fences at Heathcote’, I did, and when I looked up, he was gone, and it seemed like I had just become Youngs Plumbing.”

(Jack is still alive and well at St Ives in Murdoch). Since then, Youngs Plumbing has taken on 80 plumbers, 35 apprentices, and countless off ice staff.

“While these days I open the door in the mornings and turn on the lights, Jack is still telling me how he did it when plumbers were men, bullet-proof, and carried cast iron baths to their jobs on their shoulders,” Tony muses.

Youngs Plumbing is a family aff air with son Fraser continuing in his father’s footsteps – the third plumber in the family.

Tony’s other children, Paris and Anjelica, are creative, with the former a musician, and the latter a social media consultant.

Tony’s wife Marion, a Nurse Manager at Fiona Stanley Hospital, has been dutifully pushing her husband out the door all of these years, and has often been heard to exclaim, “You are NOT coming into the house like that! Take your clothes OFF on THE LAWN and I’ll hose you off !”

“Her favourite story is about the time she called Caesar’s Plumbing to come to our house to clear a blocked sewer when I kept telling her I was ‘too busy’’,” Tony said.

Tony says he’s proud to have provided Fremantle with plumbing and gas fitting and personalised service for 40 years.

“Fremantle is a village, it has always nurtured us, and we have always been tender to it. It is interesting, and has a human scale. It has a visible connection with the past, close enough that we can see our lineage back to the first settlers here. Fremantle is a community in the true sense of

the word. It’s creative and it’s authentic. It’s full of characters – hard-working folk who made good at the river mouth of the lucky country. My customers keep me here as they are my friends.”

Promote your business. Contact Jane today on 0417 814 128 or at jane.grljusich@gmail.com