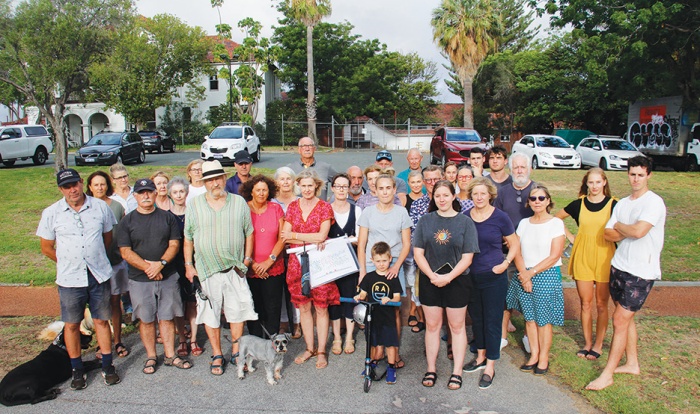 East Fremantle residents say the redevelopment of the old Woodside Hospital is too big. Photo by Steve Grant.

A REDEVELOPMENT of the old Woodside Hospital in East Fremantle which will see the ground level raised to the gutter-line of neighbours has locals up in arms.

The former 40-bed maternity hospital is being transformed into a 150-bed “health and aged care precinct” by a company formed by aged care provider Hall & Prior and the Fire and Emergency Services Superannuation Board.

The heritage-listed former home of merchant William Dalgety Moore will be restored, while the precinct will also include allied health services, a gym, cafe, conference room and amphitheatre, all serviced by underground carparks.

But Joanne Taggart, Megan Cox and Geraldine Connor live along Dalgety Street – often cited as the town’s premier address – and say the development is so large it will ruin the streetscape.

“Most of the people in the street are very happy that Woodside is going to be restored and turned into aged care, but at the end of the day the scale and the height is ridiculous for this historic street,” Ms Cox said.

Ms Taggart says the greatest sticking point is Hall & Prior’s decision to fill the site to the highest point, meaning immediate neighbours will have the four-storey units starting at their gutters – effectively adding at least one storey to the apparent height.

“Why are they the only people on the street who don’t have to stick to East Fremantle’s site datum rules,” Ms Taggart said.

The council’s rules tell developers to pick the mid-point of a block as the overall height.

Ms Taggart said residents are also concerned about Hall & Prior’s inclusion of allied health services and facilities that would be open to the community, saying they go against government policy and add to the development footprint.

“Why do they need an amphitheatre?

“If they reduced the footprint, they could reduce the tree loss and the loss of amenity to neighbours.”

While Hall & Prior say they’ve tried to retain as many trees as possible, Ms Cox said 43 will go including 19 considered large or medium.

“I am really sad about the trees; there are three big, beautiful gum trees along the front which really help the vista of Dalgety Street,” Ms Cox said.

She’s also concerned cars leaving the facility from the underground car park will be coming up a steep slope straight onto Dalgety’s footpath.

She says it gets busy with kids heading towards the school lollipop guard at the end of the road.

It’s also on the crest of a hill, and Ms Cox said when she raised it as a safety concern, was gobsmacked when the developer’s consultants said they’d stick up a mirror. She’d prefer they rejigged the design to retain the existing driveway.

Ms Taggart says residents have tried to be “reasonable” in their approach, but the stress has already caused a retired couple to sell up and move away.

The develop is also in discussions with the two homeowners immediately beside the development, who’d be most impacted by loss of privacy from the aged residents’ balconies overlooking their backyards.

Ms Taggart says that feels like a tacit admission of the development’s negative impact on the area, and could have been a tactic to ensure there was no objection from those two addresses. She’s also concerned Hall & Prior will apply to have the development sent straight to the WA Planning Commission under the McGowan government’s Covid-19 development provisions.

She said that would give the government an uncomfortable conflict of interest, as it has a stake through the superannuation board and would have complete decision-making control.

“We are not asking for more than what’s outlined in the residential design codes, and have said that we would support a 125-bed facility, but we are not sure on what basis they have so many exceptions,” Ms Taggart said.

Hall & Prior completely dodged the Herald’s questions, instead putting out a statement talking up its extensive consultation to date – but also holding out an olive leaf.

“We have consulted widely with all relevant authorities on this project including the council and the community,” CEO Graeme Prior said.

“We are extremely sensitive to the community, and we have tried to address all of their concerns, including parking. If public access to the wellness centre is a concern for nearby residents then we are more than happy to meet with the community and work out a way forward.”

Mr Prior said the royal commission into aged care had issued a clear statement the sector needed to modernise and reform.