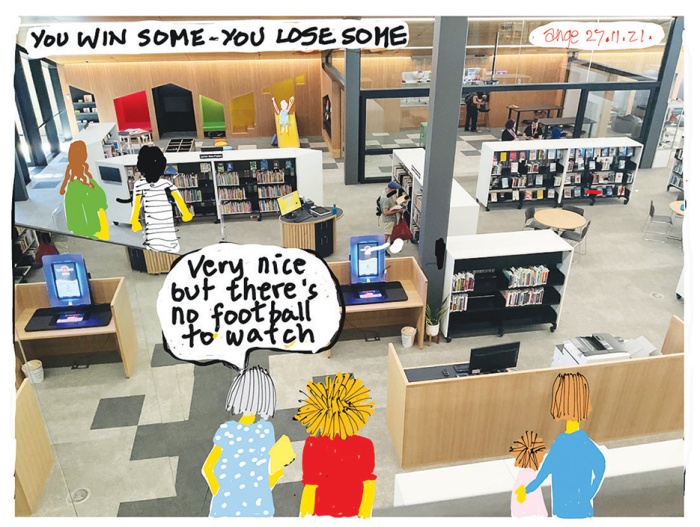 Has no-one connected to the Fremantle city council walked the footpaths of the inner city recently?

I live in Pakenham Street and invite those who vote on council expenditure to take a short walk down the western footpath from Collie Street to High Street.

But keep your eyes firmly on the ground.

One trip to Fiona Stanley, orthopaedic surgery and two weeks in a brace from ankle to knee was enough.

Now we take the safe option and walk on the road.

THE time is running out for the community response by December 5, 2021 to the Attadale Alfred Cove Foreshore Plan which embodies some $48.3 million of costings relating to staged recommendations for the whole of the foreshore and precinct-based proposals. The report also outlines existing programs

The 118-page Plan can be downloaded and from the City of Melville website and it includes the response format required which cannot be downloaded.

The report still has some way to go before it is presented to council for consideration.

Flogging off ‘our’ island

CONGRATULATIONS to Morgana Morgan on her recent letter (“Rottenest,” Herald, September 25, 2021) about what is really happening on Rottnest Island.

Like others who have tried to get real questions answered, Morgana experienced frustration.

The WA government and the Rottnest Island Authority seem to be interested only in the island becoming an “Australian tourist icon”, designed and managed to attract as many international and interstate visitors as possible.

Hence their requests for expressions of interest to build new hotels with swimming pools, to find ways of providing alternative transport (not the traditional bikes or the odd tourist bus} and to promote the same gimmicky pursuits that are available on commercially managed islands everywhere.

Try asking the RIA and the state government when they last provided accommodation affordable by and available to ordinary families during school holidays.

The Rottnest Island Authority Act (1987) and its contents seem to be totally ignored by those who manage the island.

Is there any wonder that so many WA residents have stopped trying to holiday there?

I HAVE just very recently returned to Western Australia after spending 35 years abroad.

Three weeks ago I was on my way to the Canning Vale waste transfer station to dispose of a load of cardboard.

As I entered the facility and headed up the hill to the drop off, I experienced that feeling that plucks the strings of your soul with pure joy!

There he stood in all his magnificence, surrounded by his harem of does, and bounding, newly emerged joeys.

I was struck by my own reaction to this beautiful creature. There before me was my essence, that magical iconic beast that is Oz, recognised the world over.

Everything that made me proud to be an Australian rose in my throat in an overwhelming wave of joy.

I commented, brimming with tears, to my brother-in-law just how wonderful it was to see these kangaroos peacefully grazing in a protected environment.

How wrong was I!

Last night I opened my computer to the headline: “City told to slaughter 300 kangaroos in grim, ‘money-saving’ plan.”

I will never be able to drive past that new station and sports area with out it being known to me as Heartbreak Ridge!

Maggie Morgan
Arundel St, Fremantle
The Ed says: The proposed western grey kangaroo cull in the City of Canning would be to make way for a new road and sports facility, with a report to the council saying the kangaroos are overpopulated and full of disease, making them a threat to public health. The report said relocating them would be too expensive – a bullet costs just $30 each to administer.

RECENT images from PETA Asia of Australian cattle being tortured and butchered alive in Indonesian slaughterhouses are even more shocking because it has happened repeatedly.

When Four Corners revealed this appalling cruelty in 2011, a massive public outcry led to a (sadly brief) halt to the export of live cattle. The government promised to fix these outrages with new regulations but, 10 years on and countless needlessly horrific deaths later, nothing has changed.

PETA Asia investigators visited seven randomly selected abattoirs in Indonesia this year and found workers repeatedly failed to stun the animals adequately, often violently twisting and breaking their tails to make the steers stand up for another captive-bolt gun shot.

If you buy meat or purchase leather shoes, you’re putting money in the pockets of the people who send these animals to be slaughtered in hideous, painful ways overseas.

And since the leather produced in Indonesia is exported globally, you could be wearing or sitting on the skin of the same animals that suffered those excruciating deaths.

The government won’t end this horror. But you can decide to spare animals’ lives every time you buy a meal, a pair of shoes, or a belt. Taking personal responsibility will end this trade.

As for a good news story

We can’t always rely on the ABC

It’s up to you and me

Near the jetty in Coogee

No, not the lollies

But people were there

A gesture offered in kindness

So good members of The Good News Club

It’s over to you

Just start with a few

Integrity gets the axe

BUYING votes with taxpayers’ money has been with us forever, and all politicians resort to the practice.

The latest WA Budget includes a provision to shut down the logging industry, presumably to attract the votes of the Nanas For Forests.

I was quite surprised that a Labor government would destroy an industry employing some of the hardest working and lowest paid workers in our society; people that they claim to support.

Some years ago forest professionals calculated that our forests were growing at twice the rate they were being logged, therefore they are not being destroyed.

Some of the Nanas should take a ride up into the hills and have a look at the trillions of trees growing in state forest that has been cut through at least four times over the last 150 years.