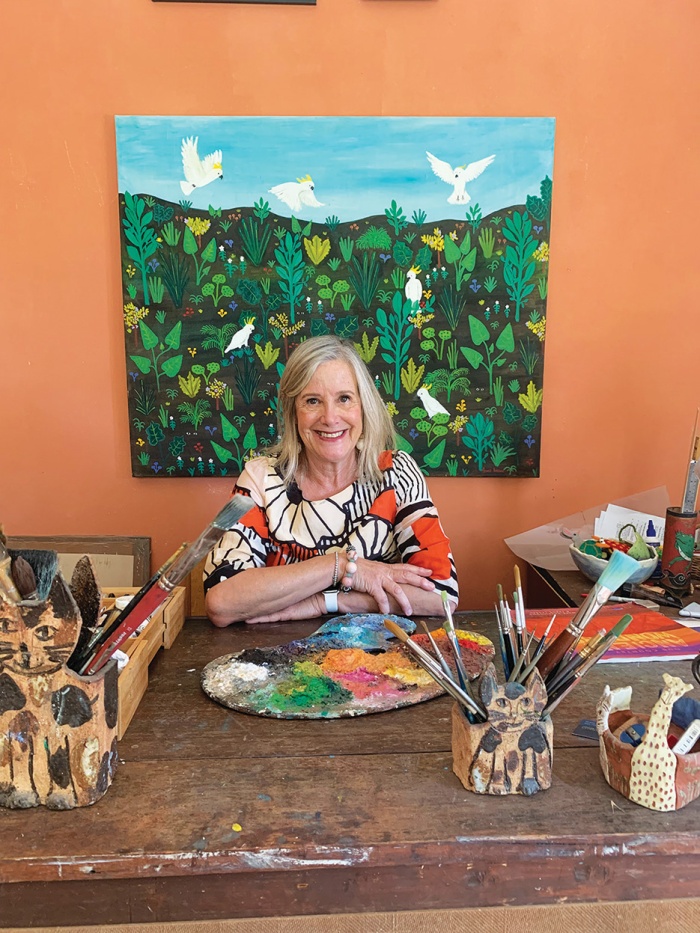 • Frane Lessac is holding a retrospective of her illustrious career.

HOW do you tell kids their favourite bushranger was also a murderer?

With big-hearted honesty and lots of bright, whimsical illustrations.

“How are kids every going to learn if they aren’t told the truth about history?” says Freo-based children’s book illustrator Frané Lessac, who is celebrating 50 books in 40 years with a retrospective at Moore’s Gallery opening next Friday.

Inside her bright kitchen, with cheerful paintings of diving mermaids and festive woven bilbies romping among small treasures collected from bush and beach, hangs a replica of the armour worn by Ned Kelly during his final shootout with the police.

The placement of the suit’s bullet holes, she says, is historically accurate.

These breakfast table contradictions are an arena where Lessac is at home.

Her work addresses the cultures, folklore, flora, and fauna of communities all around the globe. While her focus is on celebrating heritage, telling the stories of resilient communities often means grappling with the hard stories that won them their fortitude.

Lessac puts a great deal of care into making sure her stories honour the experiences of the people they represent.

“I need to find out what kind of clothing the people would wear, what kind of houses I would paint to make it as culturally accurate as possible,” she says.

The best research, she has found, is conducted on the ground.

While working on her book Midnight: the Story of a Light Horse, Lessac and co-author and husband Mark Greenwood “followed the footsteps through Israel and the Gaza strip, where this horse went through the desert, and also went to where the horse was born in the Hunter Valley in England”.

For the books We Are Grateful: Otsaliheliga and We Are Still Here! Lessac worked closely with author Traci Sorell, who is a member of the Cherokee Nation.

Lessac recalls her initial inclination to pull away from depicting some of the atrocities faced by Indigenous Americans at the hands of colonisers.

“Traci said, ‘no, you have to explore the subjects as they were’ and some of the scenes were pretty sad.”

Lessac’s illustrations have been a love letter to natural beauty and diverse communities from the very start, when she arrived on the Caribbean island of Montserrat as a recently graduated film student and started painting a landscape that so enchanted her.

Among her first readers were rock stars like Elton John and the Rolling Stones, who came to the small island to utilise its recording studio.

You can join Mick Jagger in appreciating Lessac’s illustrations from opening night, Friday January 21 at 6pm at the Moore’s Gallery. The event will be hosted by Kate Walsh, another A-list Lessac fan.

Lessac is also celebrating the release of her latest book, Our Country; Ancient Wonders, a wander through the natural beauty of Australia.

Throughout the weekend, the gallery is offering artist talks, workshops for kids, and master classes for adults. RSVP at franelessac.eventbrite.com.