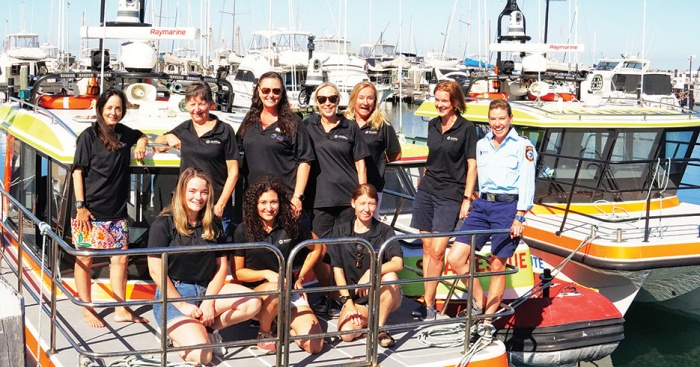 • Some of the female volunteers at Marine Rescue Fremantle.

THERE has been a surge in the number of female volunteers joining Marine Rescue Fremantle in the past two years, according to senior crew member Sophie Preston.

Ms Preston says a flexible volunteer arrangement and several high-profile rescues have seen the number of women coming onboard almost double since 2020.

Marine Rescue Fremantle has been called out to some dramatic incidents recently including a diver suffering horrific injuries from a boat propellor at Woodman Point, a man feared to have been attacked by multiple sharks off Port Beach, and a capsized vessel off Garden Island – a baptism of fire for an MRF trainee who on his first shift had to locate three people who went overboard.

“We are generally called on for all search and rescue events or reports of missing people,” Ms Preston says.

“You may remember the Scarborough teenager who went swimming and disappeared in November 2020.

“We were able to mobilise all four of our vessels on scene within 45 minutes including one departing from its pen in Royal Perth Yacht Club.”

Volunteering for Marine Rescue Fremantle is a major commitment – it takes up to a year to be fully trained as a crew member and radio operator.

“We would expect our volunteers to remain with us for at least two additional years given the time that we put in,” Ms Preston says.

that many of our volunteers have families and jobs and always strive to be flexible in the commitment.

“Our volunteers range from young university students and apprentices, to people with young children and families, to those who are retired.

“That breadth of experience means the group is interesting to be part of.”

MRF also provide support for various community and sporting events like the Fremantle Biennale Moombaki and the World Surf League at Rottnest, and is in charge of water safety for the Rottnest Channel Swim, with four vessels and two jet skis on-duty.

“Our radio operators play a key role in communications during the Rottnest swim, monitoring the radio channel, coordinating assists as well as our regular marine radio coverage,” Ms Preston says.

“We work alongside St John’s ambulance and the Rottnest Channel Swim organisation in this regard and use our radio tower as the swim base.”

MRF volunteers can be called out at all hours of the night and in terrible weather conditions, but helping to save someone’s life makes it all worthwhile.

“It is incredibly rewarding – no one is ever disappointed to see you!” Ms Preston says.

“It is typically a sense of teamwork and being part of both our own community, and giving back to the wider public.

“It is a huge time commitment, but we do it because no matter what, stepping on board or into the radio room, you are able to assist someone, you’ll find friends and colleagues, and no shortage of positive attitude.”

To find out more or volunteer go to searescue.com.au